Share All sharing options for: I guess it must be "overrated player" year for the NBA Hall of Fame

There are reports that three of the most overrated players in NBA history made the Hall of Fame today...

I kinda sorta understand how Karl Malone makes it.  His stats are hard to overlook.  BUT ... he is a horrible human being, a terrible parent and his only real superpower is the ability to disappear when times get tough.  Namely 4th quarters or at the free throw line.  He's not even very good at hunting little mexican girls.  At least he never won an NBA ring. 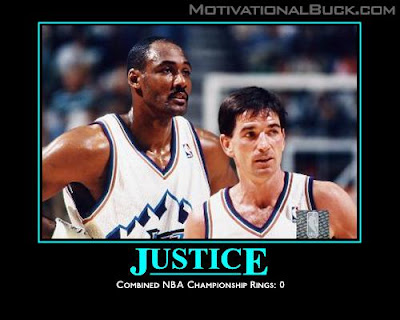 Scottie Pippen is the player who gained the most from being in the right place at the right time.  Namely - being in Michael Jordan's orbit in the prime of his career.  Kinda like how Mo Williams is somehow an all-star caliber player because he hangs around LeBron James...

But how the F does Dennis Johnson make it?  He was never all that great.  He won three rings because a guy named Larry Bird had some help in the form of Kevin McHale and Robert Parrish.  Yes, he made 5 All Star teams and won a couple of honors for defense.  But if he weren't a Celtic during their early 80s run, those honors would have evaded him.  Yeah, he made that famous layup after Bird stole the ball once... but at no point during his career did anyone refer to him as a future Hall of Famer.  Then he died and people got all nostalgic.

Which brings me to the important points:

1.  If Dennis Johnson is a HOFer as a player... how the f--k is Rudy Tomjanovich NOT (as either a player OR a coach)?

2.  Now that Dennis Johnson is inducted, Robert Horry should sail in on the first ballot in 3 more years.

3.  I really, really hate the Utah Jazz.  And if there is a Hell, I can rest easy knowing that Karl Malone will burn there in eternity after he dies... (hey, it's Easter weekend, so I'm allowed one religious reference!)