I've been under the assumption, based solely off of what I have witnessed in games, that Kevin Martin's presence has had a positive effect on Trevor Ariza. But then I crunched some numbers, and what I found made sense, but was slightly off from what I had previously expected.

Table 1 shows some basic statistics of games in which Kevin and Trevor both played. 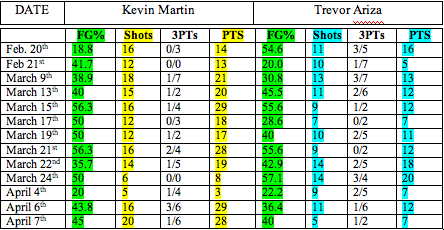 Put the whacky colors together. If you take a look at the field goal percentages, it appears that, in most cases, if Kevin has a good night, then Trevor has a good night. What does that mean? Nothing, really. Also, if you look at the two blue columns, you'll notice that Ariza is still the inefficient scorer that he has been all season - 13 points on 13 shots, 7 on 7, 5 on 10, etc.

Basically, I figured that Trevor's numbers might be slightly improved with Kevin onboard. Sadly, they aren't.

But what about from a team standpoint? Take a look at the table below.

Since Martin arrived, Ariza has been taking far less shots per game. He has also cut his amount of long two-point jumpers per game in half, and has slightly increased his number of three-point attempts per game. This is a good thing for the team - less shots from Trevor, period.

So, while having Martin on the court hasn't necessarily made Ariza a better shooter (perhaps he would have more open shots with Kevin playing), Martin's presence has limited Trevor's wild shooting, thus benefitting the team. Yes, it's a small sample size, but it's also a step in the right direction.