The Basketball Hall of Fame - A Houston Photo Journey

Share All sharing options for: The Basketball Hall of Fame - A Houston Photo Journey

Good news, I got a new job, and they pay me and everything.  With that good news comes a lot of travel though.  Luckily the last trip to Hartford, CT netted me a chance to go to the Basketball Hall of Fame in Springfield, MA.  It is a very odd thing to realize you can get there with an 18 minute drive from Hartford.  I'm not used to being able to get to the grocery store in 18 minutes in Texas, so it was a shock that I could get to a whole other state that quickly.  Anyway, I took pictures with my cell phone.  It has a 5MP camera with LED flash, so the Nexus One is sweet, but a cell phone camera nonetheless.  I warn you, there are a lot of pictures, though I did resize them all so hopefully it won't take a long time to load.

Some, first thoughts : This isn't the baseball Hall of Fame.  There is no quaint area.  There is an LA Fitness in the same parking lot and a Subway as well as other stuff attached to the actual building it is in. 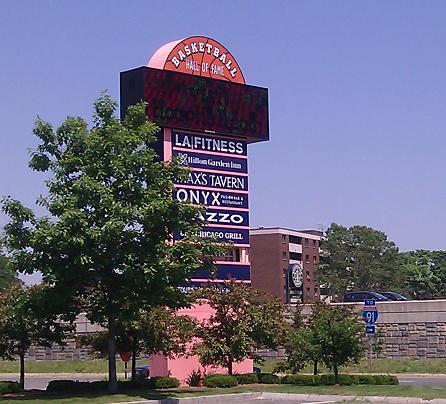 At least the Subway knows what's up.  First thing you see as you enter: 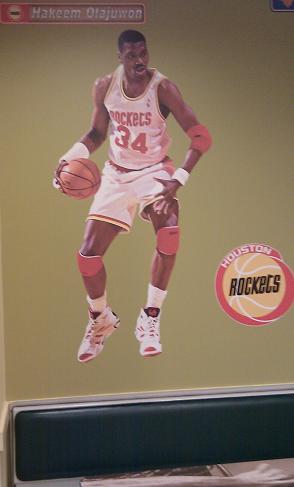 I'm not the only one that wants one of these.  Right?  I mean, the XLERATOR is awesome, but a BHOF themed one?  Oh ya! 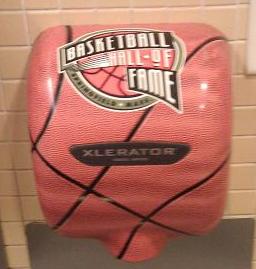 Ambassadors of the game.  It was really an odd thing.  Basically it was the owners/ownership groups.  Some were funny like the fact that the Hawks really are so dysfunctional that they only have the team logo up and not an "owner" 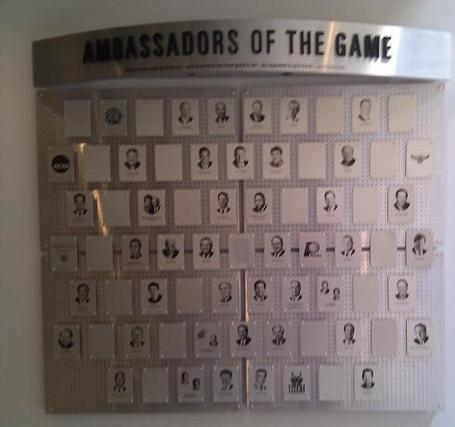 No such issue with Mr. Alexander 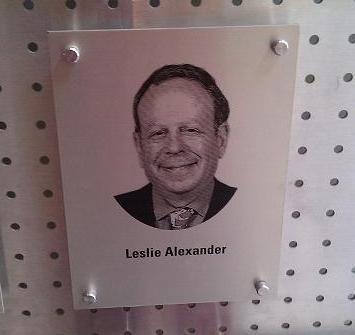 When you walk in it's a little odd, the theater plays movies all day, but doesn't actually charge.  It's 16.95 to get into the Hall though.  The theater was clearly representing though.  3PM showing! 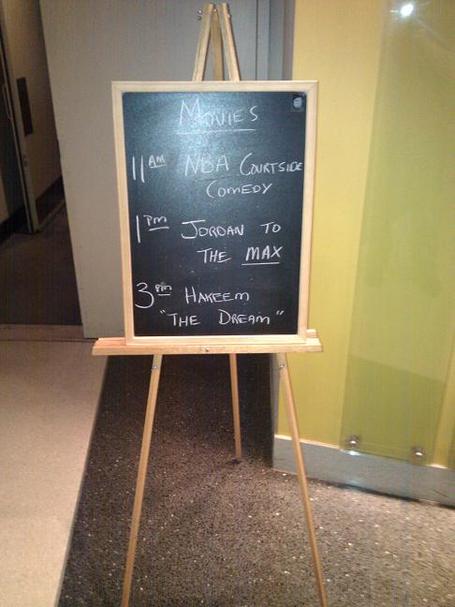 It's a three story building with a basketball court on the 1st floor, memerobilia on the 2nd floor and the Ring of Honor on the third.

The Ring of Honor is a bit strange.  It's just back lit pictures, nothing nearly as cool as the plaques that are the baseball Hall of Fame.  It looks cool, but really just isn't nearly as nice or prestigious as Cooperstown.  But I digress, it is nice and I enjoyed it.  A quick trip around the Ring showcasing Houston and the Texas area members: 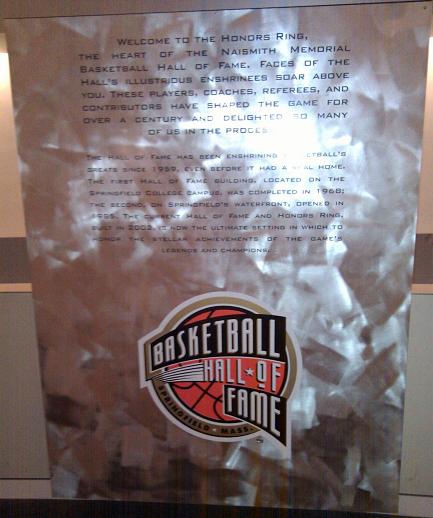 Okay, so no idea who this guy is, but seriously?  Here is a bio link for Jumpin Jack

Get these out of the way now.  You may not be a huge women's basketball fan, and I'm not either, but I still have respect: 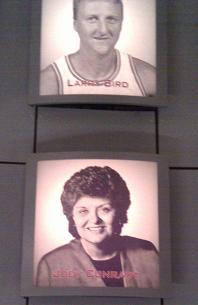 One of the funniest people ever.  And he did bring Houston 4 championships.  Apparently I forgot to get a picture of his ROH photo. 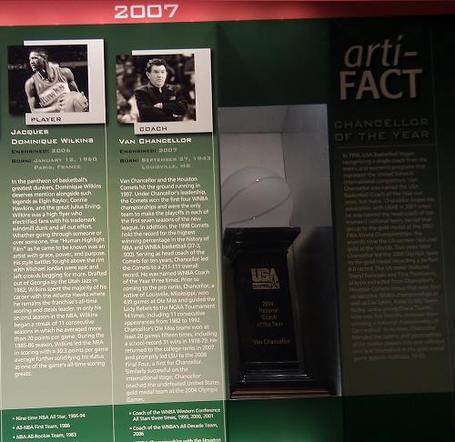 The Pocket Rocket.  I still can't imagine how much Calvin would have scored if there had been a three point line.  Plus, Chuck Daly looks awesome 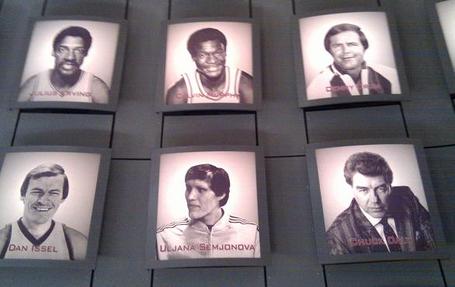 Charles Barkley may not have been remembered as a Rocket, but I'm pretty sure that's a Rockets jersey he's wearing.

Clyde "The Glide' Drexler - Houston's own 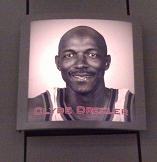 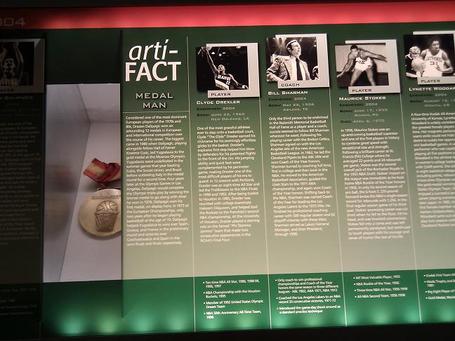 Elvin Hayes has an awesome part in his hair.  And the 5 guys around him have equally awesome pictures. 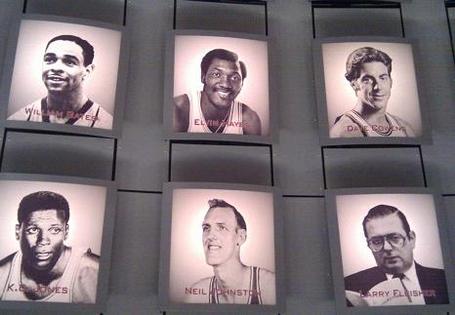 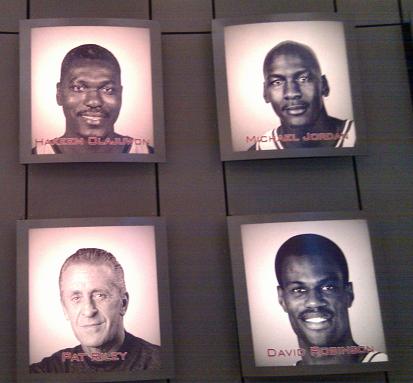 Moses Malone - While the Rockets gained Caldwell Jones and Ralph Sampson for him, in retrospect, maybe not the best idea. 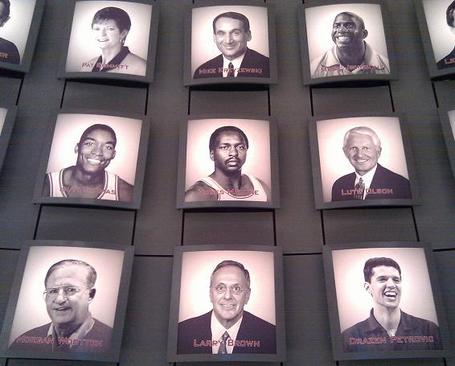 On to the second floor where all of the Memorobilia is:

Women's Influence in basketball.  Pretty much every single area that talked about Women's basketball was dominated by Houston Comets gear. 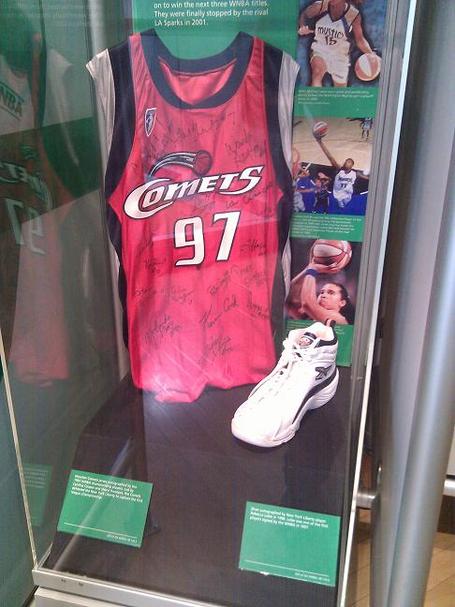 Sheryl Swoops is one of the greatest basketball players male or female period.  She was incredible. 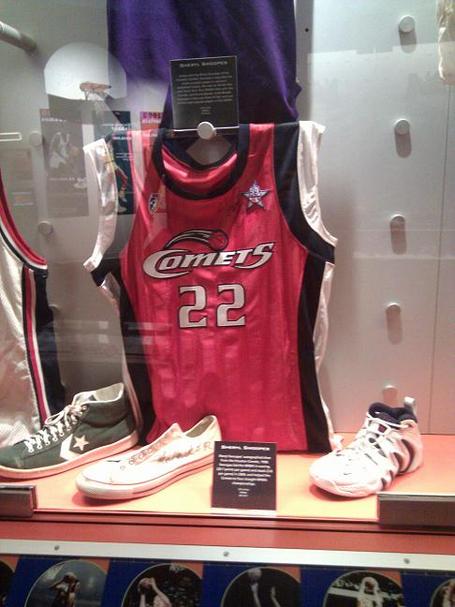 The Rockets and Comets had their own little section which was really interesting.  There were probably only 10 or so of these little cut outs that weren't league wide setups, and Houston was the only city to have their own. 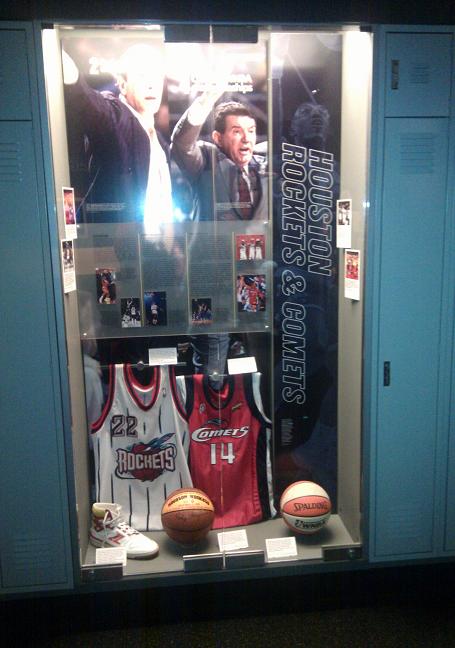 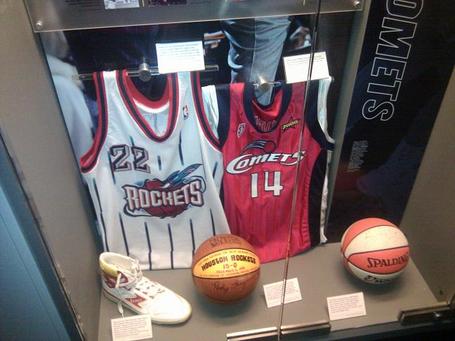 On to the college game:

Called out as the Greatest NCAA game of all time: 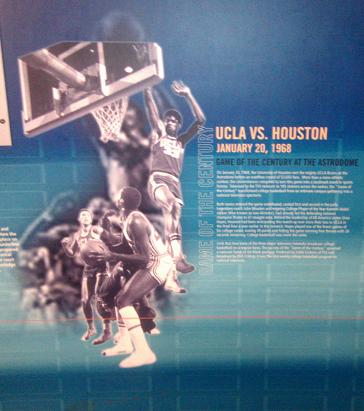 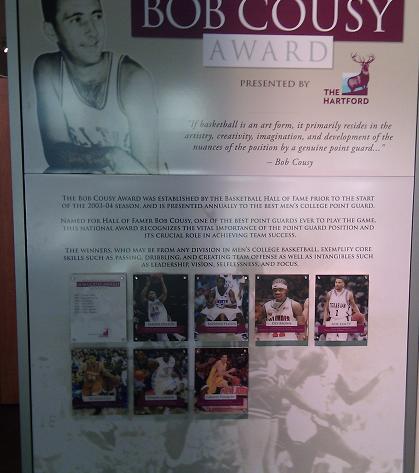 Calvin Murphy's warm up jacket from his US All Stars days: 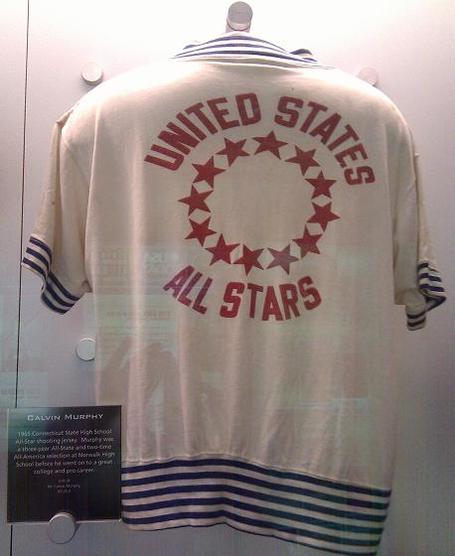 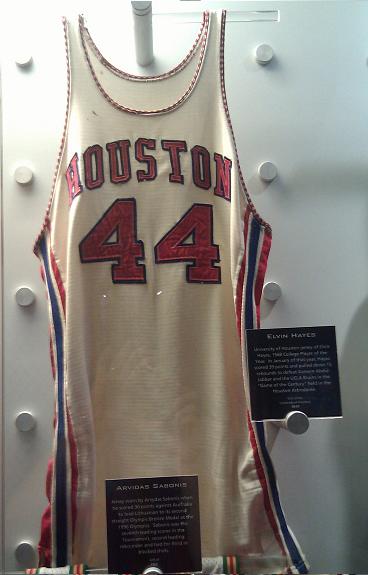 Some of the place seemed unfinished.  I guess they do small meetings in this area, but it was just a bunch of photos from the Finals over the years.  Hakeem made the wall twice: 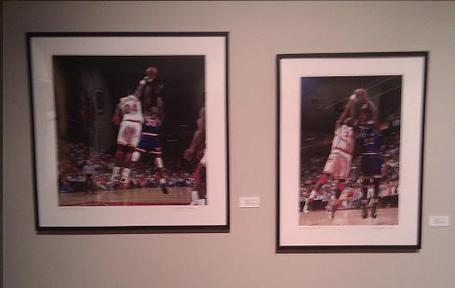 Hakeem had the most prominent picture in the International Influence wing.  Sadly every picture of any Rocket save for the two above this had them in the awful pajama jerseys. 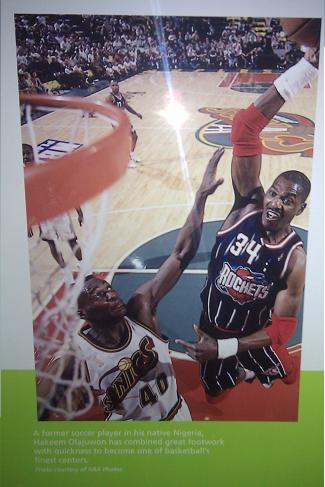 And speaking of pajama jerseys.  That sign in this pic says this is a jersey from the Rockets championship years.  I spoke with the curator guy there for about 20 minutes about how awful it was to make a mistake like that and to please change it.  The Etonic's are pretty sweet though 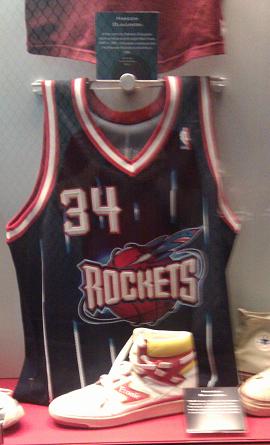 Micheal Jordan's shrine takes up a good 1/4 of the 2nd floor.  It's insane.  I mean, I get it, he's the greatest player of all time (only an idiot would argue that), but 1/4 of all memorabilia is Jordan related?  Really? Though this was sweet, every Jordan ever made.  I had blocked out how awful those after, say, the VII have been.  I take no arguments that the IV are the best though. 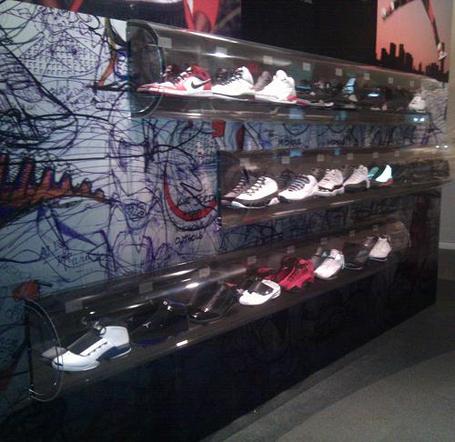 The bottom floor is a court.  I feel terrible that I didn't get more pictures of it.  The back side of it has every basket used in regulation over the years (within reason).  I got to shoot on an actual peach basket hoop, one of the more surreal experiences I've had.  It's really hard to do that by the way. 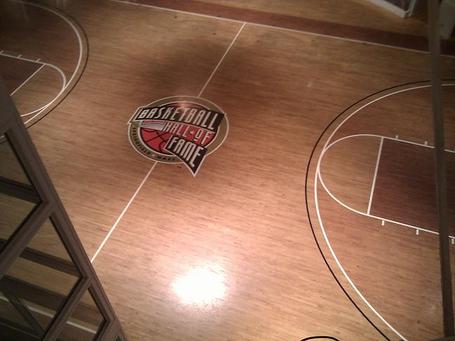 Calvin Murphy has a small foot: 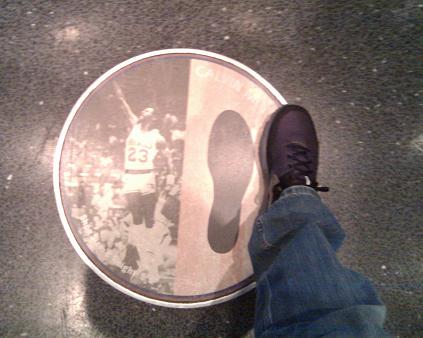 All in all, I missed Texas but was glad I got to go to the Hall of Fame. 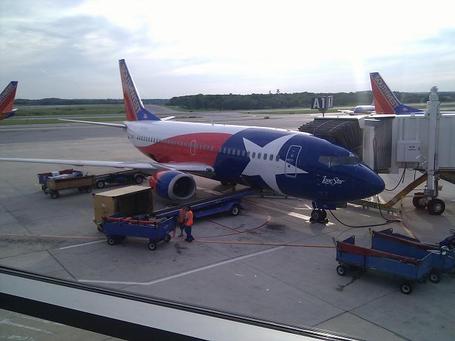