Share All sharing options for: Introduction and Offseason Priorities 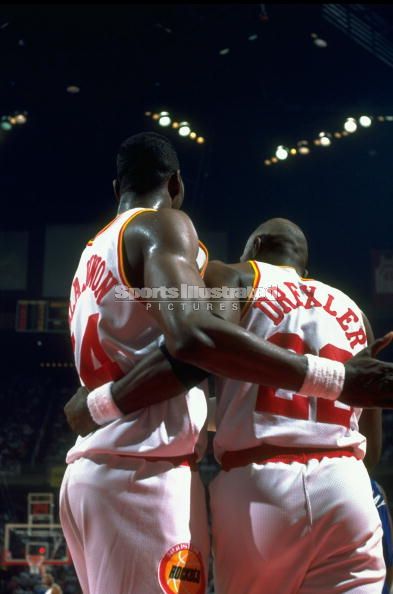 Like Mike, being the newest contributing writer to The Dreamshake, I wanted to give you a little insight into my world.

My name is Nick and I am a native Houstonian. Recent graduate from the University of Texas, I find myself unemployed and thus able to completely immerse myself in all that is the Houston Rockets. I have been a lifelong fan of "Clutch City," which is why I started writing about them two years ago. I got my start with the ESPN TrueHoop affiliate "Rockets Buzz" and absolutely loved it. Being in Austin, we didn't get a lot of games on TV so it gave me a great excuse to hit up the local sports bars and get my Rockets fix. I then decided to start my own Rockets blog,  "Heart of a Champion," this past spring with a couple of buddies. It has been a great ride, and on April 20th, 2010, we were even named "The Site We Like" on ESPN 2's show SportsNation. I am on Twitter and love to talk about anything Rockets with whomever. The reason I started "Heart of a Champion" was to create a place for die-hard Rockets fans by die-hard Rockets fans. I have been an avid reader of The Dreamshake for some time now, and am honored to be a part of this great site completely dedicated to my favorite sports franchise. Here is part of an offseason recap I have been working on:

Now that the season is over, it is time for Daryl Morey and staff to answer some big questions.

1) Re-sign Luis Scola
Luis Scola has emerged as a go-to scorer for the Rockets. He recorded 32 double-doubles and scored at least 20 points in 26 games. Scola played insanely well since the Landry trade. In the last two months of the season, he averaged 19.55 points and 8.5 rebounds a game. This is definitely an improvement over his pre-All Star stats (14.7 points and 8.4 boards). There was even a stretch where he recorded an insane 21.3 points and 18.0 boards per game in three straight contests. This season Scola has posted career highs in points (16.2), assists (2.1), blocks (.3), and free throw shooting (78%). And to think, all the Rockets gave up was Vassilis Spanoulis and a 2009 second-round pick. Can you imagine Scola coming off the Spurs bench to relieve Duncan? Scary. Scola is so creative offensively in the low post. He is incredibly agile with every move and fake he does...it's like watching a dancer on the basketball court. Luis Scolajuwon has quickly become a fan favorite to the Red Nation in just his third year in the NBA. Morey realizes this and signing the Argentinean power forward has become a top priority on his wish list.

From Jonathan Feigen, the Houston Chronicle:
"He [Scola] will be back," Morey said. And in case that were not clear enough, Morey added the weight of owner Leslie Alexander's marching orders to his prediction.

"Leslie gave us the resources and said whatever it takes," Morey said. "He's back."

You never know what tricks Morey has up his sleeve, and whether a sign-and-trade option with Scola for another free agent is on the table. Some notable big men entering the 2010 free agency class are: Tyson Chandler, Brad Miller, Brendan Haywood, Dirk Nowitzki, Kenyon Martin, David Lee, Amare Stoudemire, Marcus Camby, Carlos Boozer, and Chris Bosh.

From David Dalati, Fox Sports Houston:
Morey said he expects the Rockets to be in the mix on a noteworthy free agent. "We'll be pursuing the top free agents in a sign and trade manner. I think it's probably less likely than likely that something gets done. But we're always out there giving a class A effort, "Morey said.

2) Re-sign Kyle Lowry
This is probably going to be a lot tougher to do than signing Scola. A lot of teams are going to be coming after Kyle this off-season, and he might want to jump at the opportunity at a starting position. Lowry provided a huge offensive and defensive spark for the Rockets off the bench. His physical play was inspiring for his teammates, and Lowry always seemed to give them a boost with his up-tempo mentality. According to an article by James Buffi, Kyle's per 36 minute ranks are very impressive: FTA (10th), Offensive Rebounds (1st), Defensive Rebounds (3rd), Total Rebounds (1st), Assists (9th), Steals (7th), Assist-to-Turnover Ratio (10th), and Charges Drawn (1st). However, the question remains: is he satisfied with coming off the bench? The allure of a starting role might be the deciding factor in whether Kyle leaves or stays this off-season.

Is this Foreseeable?
For the 2010-2011 season, the Rockets have obligations of $60.43 million in player salaries. This figure includes Yao Ming's player option ($17.7 million). He can opt out of it if he chooses but I highly doubt that he does it. The man made $14.8 million last season without playing a single minute. Yao also seems very committed to the Rockets franchise and the Houston community. The team owes $11.1 million next season to Kevin Martin, they have a team option on Chuck Hayes for $2.1 million, owe $7.35 million to Shane Battier, owe $6.32 to Trevor Ariza, and took on Jared Jeffries contract of $6.88 million. In addition, the team can offer a $2.98 million qualifying offer to Lowry, and a $4.11 million qualifying offer to Scola. The Rockets owe some to more players; I just cited the biggest contracts.

What They Will Do:
I am sure Morey will pick up the option on Hayes. The Chuckwagon has been a durable player for the Rockets this season. I am constantly impressed by the way he defends bigger and more talented centers. Having him come off the bench to relieve Scola and/or Yao next year will be a great asset.

Now, switching the conversation to Scola and Lowry. As mentioned above, Morey says both players will be back. It is hard to question him since everything he does seems to be golden, but I personally see this being a lot harder than expected. Since they both are restricted free agents, the Rockets have the opportunity to match any offer either player signs with another team by extending what is referred to as a Qualifying Offer by June 30th. This will prevent Houston from not offering a contract and waiting to swoop in when the player tries to sign somewhere else. Both individuals will most likely receive higher offers than their current salary pays them, so the Rockets will have to decide how important pieces to the team both Scola and Lowry are. Don't rule a sign and trade deal out though. The only name on Rockets fans minds right now is Chris Bosh. If Bosh finds Houston a desirable location for him to end up, there is no doubt Morey will do all he can to make sure the deal happens. The only problem is the ball is completely in Bosh's court at this point in time.