Share All sharing options for: Live From New York... It's The Dream Shake @ The 2010 NBA Draft (OPEN THREAD) 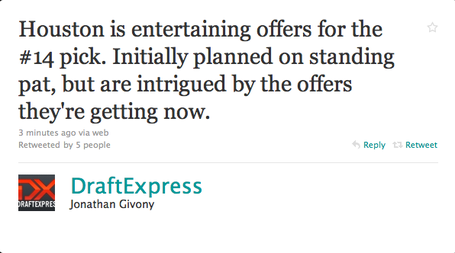 This makes plenty of sense. It also comes close to confirming what Rahat and I have been thinking about this all along. If the Rockets don't move up, they'll move down. Fourteen is just an ugly place to be. I can't imagine them staying there unless a favorite of theirs takes a tumble. Hopefully that doesn't include Cole Aldrich.

Mike Prada of Bullets Forever and Rich Twu of Golden State of Mind and I are sitting in the media section of the Wamu Theater. Right down in the front rows. So far, the only people who have shown up as early as us are Jay Bilas and Bill Pidto of ESPN, Adrian Wojnarowski and Marc Spears of Yahoo! Sports, Dan Steinberg of the Washington Post and scattered writers here and there that I can't seem to identify.

It's an unbelievable view from where we're sitting, as you can see from the photo above. The Wamu itself looks small initially - this clearly isn't Radio City - but there are still a ton of seats surrounding the stage. It's like the MSG court itself; looks small at first, but they've got plenty of seats to fill. It also hasn't hit me that I'm at the NBA Draft yet. Like, literally at the NBA Draft. if John Wall happens to walk by me, it's no big deal. BUT IT IS A BIG DEAL. THAT'S THE WHOLE POINT! I'm not entering Jeff Pearlman territory yet, am I?

We're trying to kill time before the real stuff gets rolling. May have a mock draft up some time later. Stay tuned.

UPDATE 2: Craig Sager is sporting a purple. Looks like something I'd want to pet. That doesn't sound weird at all.

UPDATE 3: Here's what my view looks like of the Turner pick. 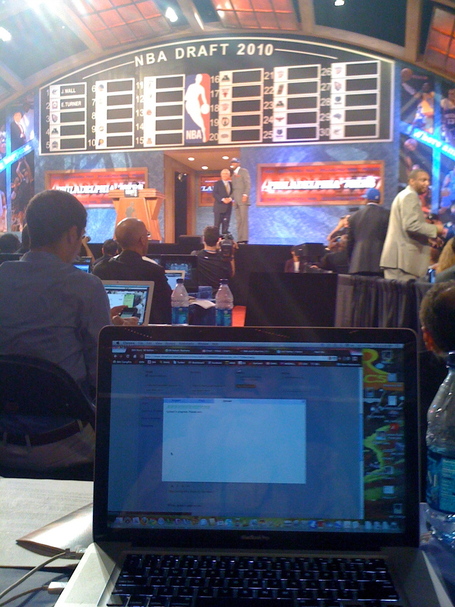 UPDATE 4: Source with knowledge of the Rockets' happenings:

"Expect something BIG from Morey."

"Lots of phone calls but that's always the case. Everyone in good spirits."