The NBA Draft is like... weeks away.  I do not even know precisely what day - just something like 2 weeks from Thursday.  I think.  That's like forever.  Since I am impatient about this (because the last time the Rockets had a good pick like this they drafted Yao Ming... and before that Robert Horry), I almost want to find Butters to freeze me so time will pass and I won't have to wait any longer! 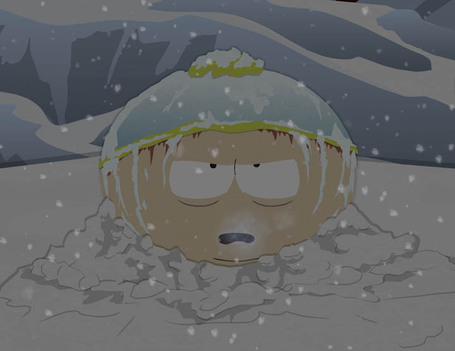 In the meantime, and since I do not want to wake up in the year 2546 having missed 227 Houston Rockets Championships in the process, how about we just pass the time by asking and answering questions?

1.  We know the Rockets are 95% certain to draft a player with the following description:  "taller than 6'9", can play C/PF, and can block shots."  Unless John Wall starts doing blow and banging hookers out in public.  For only then might he slide to, say, 7th or 8th overall (because NBA teams are quite forgiving).  Notice I did not leave out the very real possibility that DeMarcus Cousins picks up these habits.  Would the Rockets draft him?  Hmmm...

Anyway, with these pre-requisites in mind, who should the Rockets draft at #14 barring a trade??  It has to be someone among the Ekpe Udoh, Hassan Whiteside, Solomon Alabi, Daniel Orton and/or Patrick Patterson crew, right?  (The guy the Rockets probably craved - Motejunas - decided not to declare for the draft.  Damn.)

2.  Why have we not already re-signed Luis Scola and Kyle Lowry?  We cannot risk some other team going crazy during LeBronapalooza and offering Luis $100,000,000.  I do not care what you have to do, Daryl Morey - hang them off the side of the Toyota Center until you get their name on that contract!  (I do like Scola and Lowry both, but this is business!  We can't take any chances.  Suge Knight would approve.)

3.  Does Daryl Morey get invited to this mysterious NBA Free Agent Players' Summit before July 1?  Wouldn't it be in everyone's best interests to consult the smartest man in the NBA before they make decisions of such magnitude?  For those that listened to David Stern and think that the summit is not going to happen... well... believe what you want.  I hesitate to ever use the words "Chris Bosh" again on this blog, but if it's ever going to happen, you know Morey's going to have to twist a few "rules" to get what the Rockets need.  He's already been fined once this summer, what's another $100k if the Rockets can get a ring for the effort.  As Al Bundy says:  It's only cheating if you get caught!