Share All sharing options for: First Impressions Of Brad Miller

Brad Miller is a solid addition to the Houston Rockets. Nothing flashy, but solid nonetheless. He's the backup seven-footer we've been looking for since Dikembe Mutombo retired.

The contract? Sure, it's more than it should be (3 years at $15 million). Miller is 34 years old and for every step he takes forward, he's taking another two back. But that's not the issue, and to be fair, the third year is only partially guaranteed at $1 million. Regardless of how much they're paying him, Miller was a target that the Rockets managed to gobble up.

Miller fits quite nicely into Houston's system. He has a great relationship with Rick Adelman and has played some of his best seasons with Adelman on the bench. Back in Sacramento, Miller was a versatile option on offense. He could shoot, dribble and pass from the high post, the latter of which proved to be a key in running Adelman's cutting, ball-movement-oriented offense. Oddly, it is Miller, who has yet to be formally introduced, who might have the best grasp on Adelman's tendencies and schemes of any Rocket.

Miller has certainly regressed from his old Kings form. The shot hasn't been falling quite as frequently, and the rebounding numbers have taken a tumble. But nobody here is asking him to start - he'll fill in when need be. The limited minutes, along with the familiar system should enable Miller to play much more effectively than he did last season in Chicago.

Earlier this year on a podcast between myself, Jason Friedman and Rahat Huq, the three of us discussed Miller as an option for the Rockets. I endorsed Brad, and like a good substitute host, Friedman asked me what I thought of Miller's defense. At that point, I hadn't seen Miller's defense very much and essentially took a pass on the question. Now, after looking at some tape, I think I've got a basic grasp on it.

Miller won't impress anyone defensively, but he won't hurt the Rockets on that end, either. His footwork isn't what it used to be (in terms of quickness), but he makes up for it with his intelligence, showing patience against bad shooters and making an effort to close out or cut off dangerous players if he gets switched on a pick and roll. Most importantly, though, is Miller's height. He's much taller than Chuck Hayes. That's already a giant improvement.

The primary reason I like this signing is that the Rockets finally have a legitimate center on the roster who can step in and start games effectively if Yao Ming goes down. Should Yao suffer another injury this year, the Rockets will be in much better shape than they were last season without him.

The first question surrounding the signing relates to the roster. Who plays? It appears that the Rockets are putting a giant emphasis into the frontcourt, which is absolutely fine by me. The bulk of our guards and small forwards can play high minutes - they're younger. The froncourt was in need of extra bodies, if only because it is our most fragile portion of the team.

Here are the players who are guaranteed through next season: 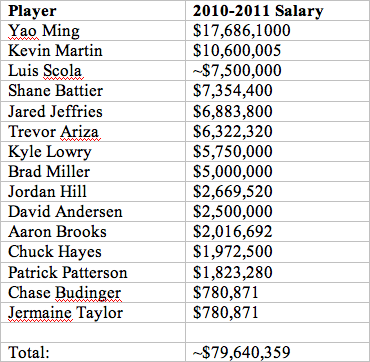 That's 15 guaranteed players through next season, not including Alexander Johnson and Mike Harris, who will likely be let go (as Don points out in the comments). Can't be certain if the Rockets will decide to make another move after this, but it's possible.

We'll have more on this as the season approaches. But, for now...

Welcome to the Rockets, Brad Miller!