This week in "Signs of the Apocalypse": Scottie Pippen and Karl Malone enter the Hall of Fame

Share All sharing options for: This week in "Signs of the Apocalypse": Scottie Pippen and Karl Malone enter the Hall of Fame

There are not many certainties about sports.  But one of them is that discussions about the Hall of Fame are certain to piss off everyone because it's impossible for anyone to agree on anything.  Well, other than the fact that Robert Horry should be in the Hall of Fame.  But that goes without saying...

Nevertheless, I think we can all agree that Karl Malone being a Hall-of-Famer is something the entire human race should be ashamed of.  Moreover, the simultaneous inclusion of Scottie Pippen certainly cannot bolster any argument that the HOF is "exclusive" in any way.  Talk about a drop-off.  Last year we get Michael Jordan and John Stockton.  This year we get the guys who would never sniff the HOF if they never met the aforementioned Jordan and Stockton.  Funny how that works.

Among the thousands of individuals who have ever suited up to play basketball in the NBA in my lifetime, I do not think there is anyone I disliked more than Karl Malone and Scottie Pippen.  Shaquille O'Neal is making a Secretariat-esque late run in this competition, but even he will probably come up short (because he's fat and lazy, you see).  It has been well documented how much I dislike Karl Malone.  The best part is that I do not even have to exert much energy in making the argument.  I simply have to mention the name "Demetrius Bell" - who Karl wanted no part of until he got drafted by an NFL team.  Or I could mention the fact that Demetrius' mom was all of 13 freakin' years old when Karl knocked her up (and consistent with his entire persona) shunned any responsibility thereafter.  Plus, the one time Karl Malone actually said something even remotely funny was when he insulted Kobe Bryant and his wife.  Not cool, dude.  Not cool at all.  I guess we can amuse ourselves with the fact that Malone is just a dumb redneck though... 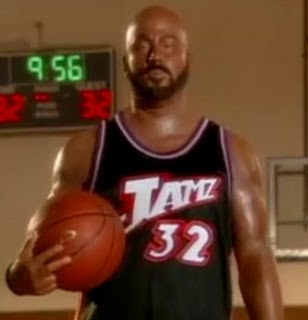 Meanwhile, Scottie Pippen is just a bitch.  An overrated, rider-of-the-coattails-of-Jordan and the byproduct of the big media market of Chicago.  Basically, Scottie Pippen was Trevor Ariza.  They both received exorbitant praise for playing perimeter defense better than the average person.  They both were terrible three-point shooters.  And Scottie was equally as shitty at shooting free throws as Trevor is/was.  It is amazing how Pippen was named one of the '50 greatest' back in the mid-90s when he really wasn't "great" at anything other than whining when his own coach was smart enough to run a play for Tony Kukoc instead of the Pip.  Plus, people typically just referred to him as "Pip" which only conjures up this image:

(and this Pip would probably kick Pippen's ass in dodgeball, too.)

Try as I might to forget it, but we can directly attribute the Rockets' fall from grace to the Scottie Pippen trade.  No, I still firmly believe that the 1999 season never happened, but the Rockets went from Hakeem, Clyde and Horry/Sam to the Barkley years... then to the Pippen years... then the Kelvin Cato years... then to Stevie Franchise and Cuttino (who still won't pass Yao the ball).  You suck, Scottie Pippen.  At least I can take comfort in the fact that you make Antoine Walker look wealthy.

Ugh, I can't believe both of these assclowns are going into the Hall at the same time this weekend.