The "January Lull" gets a little overblown in these circles. The Rockets have actually played well during the present month in past years. However, last season saw a 5-9 record during the month, and unfortunately, this edition of January may yield similar results.

Take a look at the brutal schedule that lies ahead: 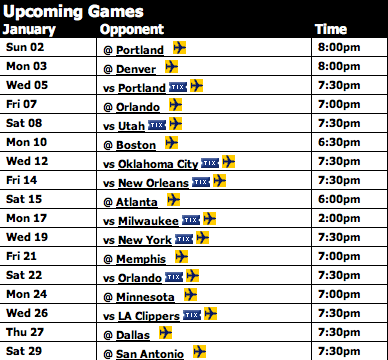 Nestled into this hellhole of a lineup are five back-to-backs, three of which see the Rockets play the second game on the road. Those games will be played in Denver, Atlanta and Dallas. If the Rockets win one of those contests, I'll be satisfied.

Aside from Minnesota, Los Angeles and Memphis, the Rockets don't have a clear advantage in any of their matchups. I like what the Milwaukee Bucks bring to the table, and as "meh" as New Orleans has been of late, they play Houston better than most teams, regardless of their record.

BD34 also made a great point that I should have recognized in writing the other day's Terrence Williams post: this will probably be the month in which we see Terrence get his first action. Why play him in must-win games against weaker opponents like Toronto? That's when the tightly knit rotation should remain on the floor. During a few of these games in January, should the Rockets fall behind late, I'm banking on Williams to make a few appearances, so long as a win is out of the question.

Lastly, if anything, this month is going to be one mammoth of a test for Patrick Patterson and Jordan Hill. With Chuck Hayes out of the lineup, the two youngsters will need to team up in defending the likes of Amar'e Stoudemire, Dwight Howard, Al Jefferson, Kevin Love, Andrew Bogut, Tim Duncan, Zach Randolph, Kevin Garnett, Nene and others. It's going to be a tremendous learning experience for both of them.

Should the Rockets finish the month with a record close to .500, it will set them up for a nice February/March run as the playoffs approach. Won't be easy, that's for sure.