Thanks NBA. I appreciate the Rockets only having a travel day to get to Portland, while the Trail Blazers had three days off. Totally fair. And I'm sure you'll have us go to Utah the very next night.

OK, so it's Denver, but it's still in altitude, and they still got a day off. And altitude does make a difference. Hakeem Olajuwon was a well-conditioned athlete and I remember he always had trouble in the Mile High City. Again, thanks NBA. Good looking out.

The Nuggets are 19-13 and just got Carmelo Anthony back the other night. Of course, he used the night to get rid of the rust so he can be back in full form for the Rockets. Again, thems the breaks. Introducing your Houston Rockets, the unluckiest team in the NBA!

I'm not one to talk much about possible trades, so I'm going to ignore the whole Carmelo Anthony thing. This is just a game preview, so I'll be focusing solely on the game itself. A radical idea, I know, but bear with me.

Quick matchups today due to the short turnaround.

Chauncey is getting old; it's getting more and more noticeable. I won't forget him killing the Lakers in the 2004 Finals, though. Thanks Chauncey.

I don't know what to expect from Rockets point guards right now. Brooks isn't 100%, and Lowry isn't as confident as he was when Brooks was injured.

OK, K-Mart. You had your bad game. No more. You only took 3 free throws against Portland. I don't know why I talk directly to you and not anyone else. Whatever. Just do well. You're better than Aaron Afflalo.

Carmelo is probably going to score 40. Come on, you know it's true.

What the F is going on with Scola. I know Portland doubled him constantly, but 8 shots!? Come on! 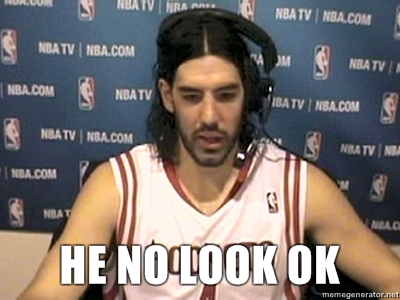 Plain and simple, I like Nene here. He's averaging 15/7 with a block. He'll get a few more tonight I'm sure.

Someone tell Jordan Hill that a basketball game has two halves.

Rockets: Yao out, Hayes out

Prediction: Rockets can't catch a break; too much going against them tonight so they lose.