Rockets Got Shelled In The Paint, But Not By Carmelo Anthony

Share All sharing options for: Rockets Got Shelled In The Paint, But Not By Carmelo Anthony

I find myself on HoopData.com quite a bit. Now that they've begun to update box scores on the daily -- a feature filled all sorts of fun statistics -- I can't seem to ignore it.

So, this afternoon, I took a peek at the Rockets-Nuggets box score, scrolled down to the "Shot Locations" charts and came across this gem: 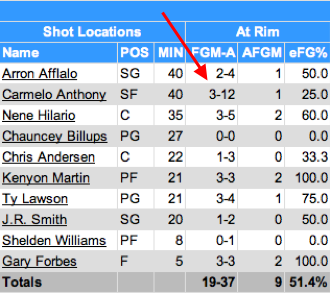 The Rockets held Carmelo Anthony to 3-12 shooting at the rim. This doesn't include his 13 of 14 made free throws, meaning that Anthony likely took about 17-19 shots at the rim during the entire game. It's a positive that Houston was able to force so many misses, but it's quite unfortunate that Anthony was able to take so many trips into the paint. Hell, the Nuggets had 40 free throw attempts throughout the game -- forget Anthony: the entire team destroyed the Rockets' interior D. If you remove Anthony's paltry numbers, the Nuggets shot 16 for 25 at the rim. Pathetic.

It's not surprising that this happened. Denver prioritizes drawing fouls in the paint and Houston prioritizes fouling in the paint, since their lack of a defensive presence at center doesn't give them any choice otherwise. Still, though: nearly 60 shots were attempted at or near the rim? Sixty. Jeez.

To end on a good note, Patrick Patterson swatted the living bejeesus out one of Anthony's nine interior misses. Good for him.

In three games without Chuck Hayes...