They teach their new players to flop, too:

They signed the biggest jerk in basketball, whom they knew had just lied to his team: 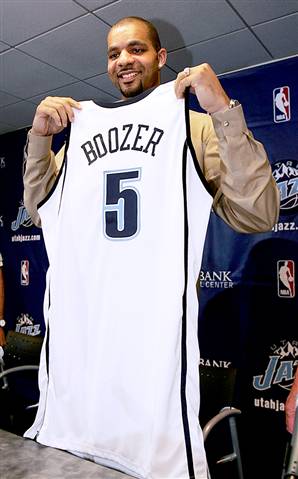 I hate the Jazz like I hate the Nazis, baby-snatchers, and rapists. I hate Jazz fans like I hate cancer. Even Voldemort knows that being a Jazz fan is a line you shouldn't cross. But please, don't blame them for being misguided.

Luckily, the game is in Houston, where the Rockets will be well-rested dead tired after their game in nearby New Orleans Orlando. God, I hate the NBA schedule makers. And you know Jazz fans will think that if they win it proves that they are superior to us.

Isn't this why we brought Courtney Lee to Houston? To see if he could guard guys like D-Will?

I hate the Jazz, but I'm okay with Williams. In fact, I broke my only fantasy basketball rule (never draft a Jazz or Mav) this year and paid $55 for him in my auction draft.

OK, Lowry. That was your worst offensive game of the season. 0 points? That's disgraceful. Get it back tonight.

K-Mart took the Denver game personally, and has played like it in these last two games. I like what I see, and I want more. It's like K-Mart's good play is my drug. If only he could play defense. Did you see that he had the worst +/- on the team against the Magic?

Raja Bell is a punk. See the above video. And he plays for the Jazz, so his family is damned to douchedom.

If Shane Battier is Captain Awesome, Andrei is Captain Turd Nugget. My brothers actually remember back in the day when I asked, "When is that guy going to die?" I'm still waiting.

And I hate that we have the same initials. I have a group of people I play basketball with that try to call me AK-47 and I just want to break something. I must break him.

The only reason to like Paul Millsap is that he's not Carlos Boozer.

Great first quarter for Scola, then he disappears. What happened to Scola? This is not the same guy who was playing for us at the beginning of the season. The effort is still there, don't get me wrong. But that's not the Argentine we signed.

The Rocket killer himself, and now he plays for the team I despise the most. Awesome combination. Just awesome. Maybe Hill can defend him better than Yao or Chuck could?

Yeah, no chance, I know.

Edge: Rockets. Not even close, except our bench hasn't been great recently.

Final note: can you tell I hate the Jazz? Probably not this much, but a lot.