Share All sharing options for: Does Luis Scola Belong In The 2010-2011 All-Star Game?

All-Star talk isn't the most necessary form of discussion around, but it's a subject that is certainly fun to debate. Zach Lowe took care of Kevin Martin, (wonderful analysis if you haven't already read it for yourself), so let's get to Luis Scola.

Luis Scola might be having the best season of his career. He's one of the most versatile forwards in the NBA, as he pairs an effective elbow jumper with a slew of crafty post moves that includes the greatest up-and-under scoop shot of this generation. He has taken his game to a whole new level after re-signing with Houston in the offseason, yet his increase in production has gone relatively unnoticed.

Sadly, Luis Scola probably won't make the All-Star team. He will not be voted in by the fans as a starter, and he likely won't be selected as a backup -- that is, unless a few of the Western Conference forwards slated to be chosen ahead of him decline to participate due to injury.

It's a shame that the All-Star game groups small forwards with power forwards or else Luis might have a real shot. But it's a necessary grouping given the minimal roster space. This doesn't bode well for Scola's chances, so my hopes regarding his inclusion are fairly dim.

All of this said, I took a a look at the numbers to figure out where Luis stands with his peers. 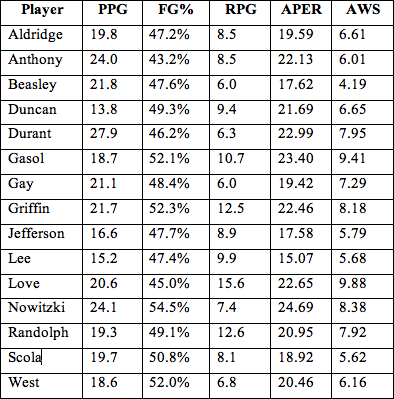 Out of the twenty-three forwards listed on the Western Conference ballot, I determined these fifteen to be the most deserving candidates. The metrics I chose to rate them by were at my discretion and obviously discount for defense, which will be addressed specifically later. APER (Alternate Player Efficiency Rating) and AWS (Alternate Win Score) are two statistics that I don't presume many people will look over in deciding whom they feel is worthy of selection, but I tossed them in here for kicks.

I'll admit, it's a fairly basic look. But it's the All-Star game. "Basic look" is a step further than the All-Star game's rating system, whatever that may be. Perhaps it's "Dunks + Game-Winners + SC Top Tens + LeBron Jamesness + Jersey's Sold + Jersey Shore Appearance Probability." Something like that.

Let's see where Scola ranks overall in each category out of the fifteen players that I selected:

It's a decent fallout at best. In no way does this determine Luis Scola's fate as compared to these players. We're only looking at these specific statistics, and while they can be telling, there is far more to be determined in the makeup of a basketball player, particularly on the defensive side of the ball. Unfortunately, defense is a secondary act in Scola's game. He is a scorer, first and foremost, one of the many one-dimensional players the Rockets currently employ.

The All-Star roster currently uses two starting forwards and three backups, meaning that Scola would have to fall into the top five. According to these numbers and to many others, Luis Scola does not fall into the top five. I'd probably sort through Durant, Love, Gasol, Nowitzki, Randolph, Anthony (despite his low FG% - he makes up for it at the free throw line) and Griffin to determine that figure.

It's worth noting that Love and Griffin are the best players on two of the league's worst teams, but given their high AWS and general impact upon taking the court, I'd venture a guess to say that, for their respective teams, each is more responsible for the few wins than for the many losses.

In addition, to combat the "more touches and thus better numbers" argument that can be made against Love and Griffin, each has a lower usage than Scola. This isn't the definitive end to the idea that Griffin and Love may have inflated numbers due to a lack of surrounding support, but it's a start. Michael Beasley and Eric Gordon certainly take touches away from Love and Griffin, anyway. They aren't by themselves on the court.

Aside from those first seven, I'd argue for LaMarcus Aldridge ahead of Scola as well - he has stepped up his production significantly with Brandon Roy sidelined and has led the Trail Blazers to a surprisingly competent record.

Although I hate to group small forwards with power forwards, Rudy Gay, Al Jefferson, David West and Scola would be in the mix for the eighth slot in my book, followed by Duncan, Lee and Beasley.

As noted, this shouldn't be the end game of the discussion as to who warrants selection, but according to my brief attempt to sort players out, Scola is on the outside looking in, and I think this is the case in any form of discussion. He's no doubt a valuable asset for the Rockets and is one of the most talented power forwards that the league has to offer, but he's not quite All-Star material, which is unfortunate. He deserves recognition for something, but I think he'll settle with his spiffy, brand new contract.

By the way, speaking of Scola's new contract, isn't it worth noting that the two players to whom Houston just paid big bucks are having career years AFTER receiving their mass amounts of dough? Jerome James, we shun thee.