Kind of a short preview today. Class+all anyone cares about is the trade deadline at this point=useless preview that no one will read.

I know the Cavs are terrible. Like, really terrible. And the Rockets are on a back-to-back. But this is a team that beat the Lakers and has the athleticism to give the Rockets problems. Much like the Nets last season, they are not to be taken lightly.

Also, Rick made a smart decision last night in using the bench in the fourth quarter. They were able to win the game for the Rockets, while giving the starters some rest for tonight. This is one of those games where the starters will have to pick up the bench, as I expect the latter to be a little tired, especially in the second half.

By the way, how great is Patrick Patterson? I just loved this quote (via AP):

"We went to the pick-and-roll down the stretch, and I was just going hard to the basket every time," Patterson said. "My teammates kept giving me the ball -- probably more than they should have -- and I just tried to finish strong."

Mo Williams normally starts but he's questionable with a bum ankle. He tried to practice Monday, but couldn't go. Sessions is a really good overall point guard. He can score, get to the free throw line, and passes really well. I'm not sure how great of a defender he is, but we'll see tonight.

Parker is a sought after wing player that can hit threes and play defense. Sound familiar? Yeah, K-Mart has practiced against this type of player at every Rockets practice. I expect him to bounce back, and I realize he did poorly because I didn't put in the Calvin and Hobbes picture. So here's one, albeit one that wasn't drawn by Watterson himself. 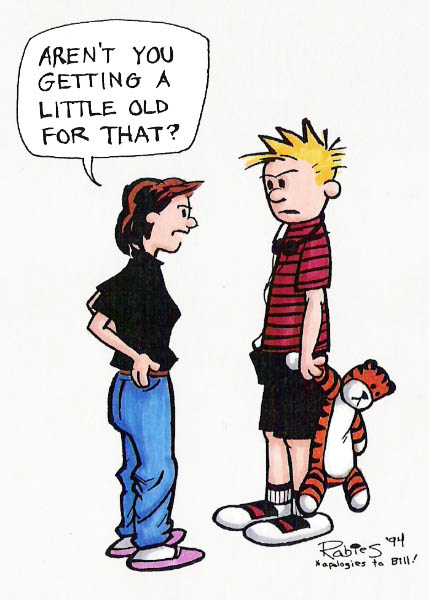 He's also got hops and will be a problem for us tonight. Expect scoring.

But Battier brings a lot to the table, and he's not one of those guys who plays badly around now to hurt his trade stock. I love that about him, and I hope he gets a ring someday.

Jamison's averaging 23.0 points and 8.8 boards through his last five outings. He's shooting the ball extremely well, converting 44.4 percent of his 3-pointers over that span. His lone fault has to be his free-throw shooting. Jamison is connecting on just 65.4 percent of his freebies heading into the break.

Scola is better, and should be rested.

Hickson isn't really a center, but when Varejao went down it hurt the Cavs height-wise. Sound familiar (again)?

I like the guy, and he can score and is athletic. This does not bode well for us tonight, though I'm sure Chuck will abuse him on the other side of the ball.