Sorry again guys for missing Saturday's preview. Seems like I'm apologizing a lot lately. But two weeks after the stomach flu, I get what appears to be food poisoning? Two days before a major exam? And during the Super Bowl? Come on man! I see what it is: Rockets beat the Jazz, so the Sports Gods have to take back something in return. In this case, it's my health. But don't worry guys. I'll make that trade any day of the week, as long as Carmelo is involved, too, am I right?

Thanks to Tom for putting a preview up on such short notice. I know he's busy just like the rest of us, so that was cool of him.

Let's talk AB for a nanosecond. We're all starting to get a little bored with it, or at least annoyed by AB's unwillingness to increase his own value whether it be for trade value now or for his contract this summer.

So what does that mean? It means that we can expect Courtney Lee and possibly Terrence Williams to get some action at the point today. Since Adelman hates T-Will like he hated J-Hill at the beginning of the season, I'm starting to think this man has a problem with nicknames that are just shortenings of names. But I'm just a bystander. I don't have a source or anything.

As an aside, I really hate the Denver announcers. Like, I really hate them. If you get have to listen to them on the "Altitude" Network (I know, just brilliant), maybe put it on mute? Personally, I will be looking for a way to listen to Craig Ackerman, whom I'm okay with (he's no Gene and Jim), but he gets the job done and is actually ridiculously impartial. It also helps that I met the guy and he answered all my stupid questions.

And yes, I met him at the Rockets' Basketball 101 Seminar last year, ressaliance, so it wasn't completely anti-feminist. Then for some reason this year they made it an all-women thing. And that was a little anti-feminist.

Mini-rant over. Onto the matchups.

Chauncey is getting old; it's getting more and more noticeable. I won't forget him killing the Lakers in the 2004 Finals, though. Thanks Chauncey. Also, he doesn't seem to play that well against us anymore. He's averaging 13/2/2 against us this season in two games, but it's been going on for a while.

Martin got approximately 0 calls last time in Denver, the announcers called him a no talent ass-clown (paraphrasing), and he picked up a technical early and Rick pulled him for the rest of the game.

Then, two nights later he killed the Blazers with that 45 points on 18 shots game.

And I really like Arron Afflalo, by the way. I don't like trying to spell his name, though.

Carmelo is probably going to score 40. Come on, you know it's true. He did it last time, almost. 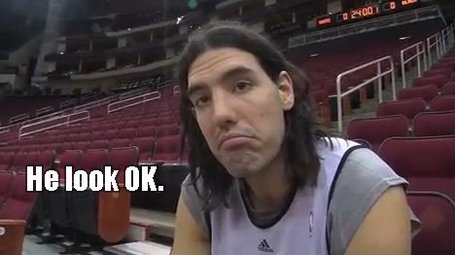 Kenyon Martin isn't bad either. But does he know how to tango?

Plain and simple, I like Nene here. He's averaging 15/7 with a block. He'll get a few more tonight I'm sure.

Rockets: Yao out, Jordan Hill out

Prediction: Nuggets win handily, by 15 or so