Recap: It's A Young Holiday As Sixers Shut Down Rockets Late, 108-97

Share All sharing options for: Recap: It's A Young Holiday As Sixers Shut Down Rockets Late, 108-97

Houston wasn't supposed to lose to Philadelphia until the Astros took on the Phillies in the coming days. Now, after a 108-97 loss on the hardwood, Houston sports fans will likely be pinning their playoff hopes on the Texans next fall, as the Rockets have all but officially fallen out of contention.

Joke aside, perhaps the Rockets were supposed to fall to the Sixers. After tonight's loss, the Rockets have now lost seven of their last eight to the athletic Sixer bunch. I think about seventy-five percent of that can be attributed to one Thaddeus Young, who could easily challenge Jason Terry for the official title of "Rocket-Killer."

Young presents a horrible matchup for Houston. He's too long and quick for Chuck Hayes, and while you'd think that the more agile Patrick Patterson could serve as a remedy, Young has done damage against the Rockets this season nonetheless. In his latest effort Wednesday night, he dropped 22 points and grabbed nine rebounds in 31 minutes. Someone needs to tell Thaddeus (we can refer to him simply as 'Thaddeus' as he is the only Thaddeus in NBA history) that the Rockets, in fact, are not a prison league team to be unmercifully destroyed, or else this may continue.

Contrary to what the gameflow might say, the Rockets really did have this one somewhere in the middle of the third quarter. And then they stopped making shots. This time, for once, it was indeed the offense that screwed the pooch for Houston. The defense allowed only 24 points in the final frame, a tad below the Rockets season average in that area.

Not only did the Rockets fail to make shots in the fourth quarter, but the overwhelming majority of their misses came in the paint. Observe: 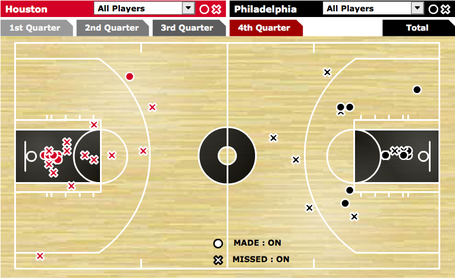 That's disgusting. For non-basketball fans out there, this is the equivalent of Neo looking at the computerized, numerical presentation of the Matrix and barfing on the spot. It is not good.

To me, it appeared that the Rockets left the comfortable confines of their motion offense and attempted to run iso plays far too often, resulting in missed Luis Scola layups, among other atrocities. Were these shots bad shots? Not necessarily: had they fallen, we could be praising Houston's decision-making. I simply would have preferred a different approach. That thing that Adelman does where the play starts in the hands of Chuck Hayes at the high elbow and allows for the point guard or shooting guard to either catch the ball moving laterally or cut backdoor for an easy layup? I like that. Do more of that (then again, after a while, teams seem to catch on to this form of offense).

The Rockets managed to shoot effectively from three-point range, made all but one of their 22 free throws and recorded a respectable 22 assists. So what went wrong? The simplest answer is that the Sixers took more shots (85 to Houston's 83), a rarity for Rockets opponents. Houston relied far more on the fast break for points than Philadelphia, who capitalized on second-chance points with greater efficiency than did the Rockets.

Jrue Holiday's shot also found water, as he finished 8-12 from the field for 24 points with twelve assists to boot. Holiday, like Russell Westbrook, wasn't a pure point guard coming out of college, but he has shown a great amount of improvement over the last two seasons and, in those terms, is arguably the Eastern Conference's version of our own Kyle Lowry, who finished with 19 points, fifteen of those coming off three-pointers.

Chase Budinger played well, as he forced Andre Iguoala into a subpar shooting night and grabbed nine rebounds to go along with fifteen points. Chuck Hayes once again flirted with a triple double (8, 8 and 7) and could have easily scored 14-16 points had he not missed a few contested layups. As for the other starters, the Sixers did a nice job taking Kevin Martin out of his element, forcing him to resort to taking off-balance jumpers. Luis Scola finished with a quiet seventeen points but struggled late in the game, like many others.

Can't say I'm surprised by the result, despite the opponent's record. The Sixers have always been a bad matchup for Houston, even after the Rockets have made significant roster changes. I'm telling you: it's all because of Thaddeus Young.