If Marcus Morris can play small forward in the NBA, I'll like this pick. If he's just another power forward for Houston to stockpile, I'm incredibly confused.

With Chris Singleton and Kawhi Leonard available, Houston chose to go with the available Morris twin instead. He can score, he can guard, but are we sure he can do that against the three? If not, I'll take Patrick Patterson and move on with my day.

Don't rule out a move from Daryl Morey and Co. as the draft continues, but for now, I don't like it. At some point, perhaps, I'll watch some film and get a better look at his quickness and agility. Then again, if Draft Express' Jonathan Givony is already calling him a power forward... 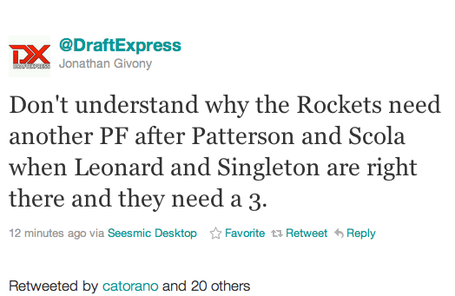 ... then I'm slightly worried. Fine, Rockets, draft for best available, but Marcus Morris -- despite perhaps being the best available -- is not much of an upgrade over what Houston already has in its arsenal.

UPDATE: Well, unlike last year when I waited thirty minutes for Patterson's presser, the NBA rushed Morris into the room and out of it before I walked in. I'll get something with the 23rd pick.

Hou getting flynn. Miller to minny

Motiejunas will be traded to the Rockets. Unclear on other details.

SOMEONE JUST TELL ME WHAT IS HAPPENING.

The Rockets and Wolves have agreed to trade J Flynn and Montiejunas to Houston for Brad Miller, 23rd pick and future 1sst, source says

The Houston Power Forwards, everyone. Fitting, you know, with the Houston Tight Ends on the other side of town.