Share All sharing options for: Report: Yao Ming Will Retire After Nine Seasons

Yao played just five games last season, and hasn't been able to fully recover after having surgery in January to repair a stress fracture in his left foot. The veteran center informed the Rockets, the league office in New York and NBA China of his decision to leave the game within the past 48 hours, sources said.

This announcement comes as no surprise to those of us who remember Yao's comments from a year ago, when he noted that if he ever had to go into an extensive recovery period without achieving full results, he'd just as soon leave the game and save the time and energy. Though it's a somber, anticlimactic ending to a spectacular career, it's the right call for Yao. The foot, it appears, never healed as it should have.

Be happy that Yao retired a Rocket, if only because he wanted to retire a Rocket. Regardless of whether or not we believe the Rockets could have benefitted from trading Yao last season, having gone through the Hakeem Olajuwon situation with Toronto, I'm glad to say that this is an ending free of bitterness.

Looking for a positive from The Ming Dynasty's end? It allows Houston to move into a new era of Rockets basketball. There no longer exists the Yao Ming crutch, on which Daryl Morey could lean when he fell short in his pursuit of a center. That crutch has finally snapped, and now it's up to Morey to find a true replacement.

Sadly, most of the talk surrounding Yao's retirement will include "what could have been." I'm not so inclined to bypass his achievements as if they are null and void. Yao changed the game of basketball off the court and dominated opponents on it. Think about it: when Houston selected the Great Wall back in 2002, I don't remember many people predicting that the 7-foot-6 softy would quickly develop into an absolute monster and eventually become the best center of his era.

(Actually, regarding Howard, it wasn't even close when the two went head-to-head. These stats are just mind-boggling.)

The Dream Shake will have more thoughts and opinions on Yao's retirement in the coming days. For now, though, you can enjoy this clip of Yao back in his prime. Among all of the video options, I chose this, the single most badass moment of Yao's career that I can recall.

UPDATE: Former running mate Tracy McGrady -- who has since changed his Twitter avatar to a picture of Yao -- chimes in on the announcement: 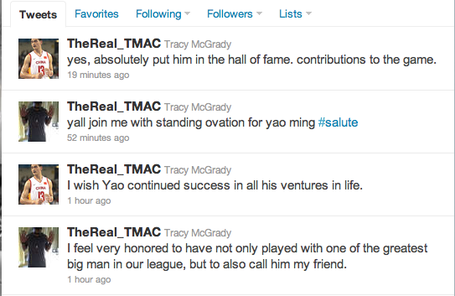