Zach Lowe is one brave soul -- and a really smart brave soul at that. The author of SI's fantastic Point Forward blog took on a rather ballsy project this past week: he ranked the NBA's top 100 players, regardless of team context or salary.

That's a whole lot tougher than it sounds. If you asked me to sift through Wilson Chandler, Mike Conley, Ty Lawson, OJ Mayo and Louis Williams and then rank them in order underneath a Sports Illustrated header, I'd probably shut my computer and go to the beach.

Zach did his duty and he did it well. He's a Celtics fan, and yet he threw Tony Parker ahead of Rajon Rondo. Few people, I can only assume, would really, truly place Tyson Chandler among the NBA's top 40, or stick Zach Randolph ahead of Blake Griffin. Mr. Lowe nailed it on all three of those points as far as I'm concerned. Out of the many "best" lists I've seen, this one is probably... well, the best. 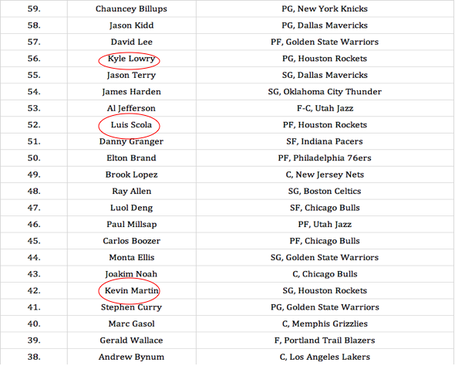 Keep in mind a few things when discussing these rankings:

1. "Regardless of Team Context"

Put it this way: if I'm picking a team and I have a chance to slot Courtney Lee (who did not make this list) or John Salmons (who did make this list) at shooting guard, it all depends on who is around him. If my point guard is a scoring type like Derrick Rose with a weak three-point shot, give me Courtney Lee. If it's a pass-first player who can defend a little as well, give me Salmons. Make no mistake: context always matters. But if we're simply ranking players on ability alone, no matter what you think of Salmons, he's been the better player to this point.

Personally, I think it's near-impossible to separate players who play different positions. There are so many different requirements for each role that twisting them all together often results in a tangled mess.

Ranking by position alone makes more sense, but again, for the purposes of this list, throwing all of the peas into the pod was necessary. It's why Stephen Curry is ahead of Kevin Martin -- Curry is a point guard. A young point guard is more valuable in this day and age than a shooting guard. It's also why Tyson Chandler ranks so highly. We Rockets fans should know: it's tough to find a plus-center nowadays, and it's clear that once Chandler stepped on the court in Dallas, the team benefitted tremendously.

3. Defense Matters... But Team Context Slinks Into The Picture

Defensive metrics have evolved over the years, but they still leave plenty to be desired. It's one thing to be able to look at a player's Synergy stats and compare them to those of other players, but then you have to ask, "Well, if Shane Battier is playing defense for a team with a paint-protecting center like Marc Gasol instead of a team without one, his stats will probably look better, won't they?" It's the biggest issue with putting together a two-way list like this: you just don't know how much better a defender Luis Scola could be with a defensive-minded center next to him. Lowe admits as much and takes it into account, but it definitely leaves room for argument, particularly on Martin's front.

So, what do I think of Houston's three representatives?

Say it aloud: Kyle Lowry is nearly a top-fifty player in the NBA. Seriously. He wouldn't have even been considered three years ago, and thats speaks volumes about how far he has come since Daryl Morey took a chance on the former Memphis backup.

That said, I think Lowry could have slotted in at number 54 -- ahead of James Harden. If Lowe is going to push Curry ahead of Martin for his point guard credentials, I'm going to apply the same science to the Harden/Lowry argument. There's no doubt Harden had a profound effect on the Thunder offense, especially late in the season, but as the floor general, Lowry literally steered the Houston ship in 2011. His timing was impeccable.

Something should be said for Lowry's ability to single-handedly change the momentum of a game. His grit and energy is contagious, and it spreads to his teammates whenever he starts to boil. I love Harden's game and his potential for growth, but right now, I think Lowry deserves the slight nod.

My Danny Granger man crush prevents me from placing him behind Scola, so instead, I'll elevate Luis ahead of Elton Brand. Brand is clearly not what he used to be, but like Scola, he's still good for a near-double-double and a few hustle buckets every night. Given how difficult it is to separate Scola and Brand defensively, the edge goes to the Ice Cream Man solely for offensive efficiency and general production.

I've always appreciated Scola's consistency, and while Lowe cites Brand's defensive versatility as a reason to place him at 50, I'll make the case that Scola's offensive versatility is slightly more impressive. Brand might be alone on defense in the post, but Spencer Hawes -- despite his Spencer Hawesiness and other underwhelming qualities -- can at least stretch the floor and occasionally take a second defender off Brand. Scola doesn't have that luxury. He's been Houston's lone option on the block for the past two seasons and hasn't missed a beat.

This hurts. Martin has become one of my favorite players, not only to watch but to be able to root for as well. He's one of the smartest players on the floor and despite what you might think of his floppy mentality, he's a point-producing machine with unmatched efficiency. That hasn't changed.

Martin also has his flaws, especially on defense. We can keep telling ourselves that he'd be better in a different system, but I just don't see it. No matter how much I want to place him ahead of Gerald Wallace or others, the only switch I can reasonably make is to drop Tyreke Evans behind him.

When comparing the two, Martin's a better scorer and he has a definitive position, an important factor that I'll take to the grave. I understand that Evans is capable of doing plenty more than Martin, from passing to rebounding to defending, but it's the way that he does it that has always bugged me. Evans too often takes the flow out of the game and kills the synergy on the floor. Martin doesn't pass the ball enough to justify the opposite on his behalf, but he's always managed to fit into the flow of an offense a little better. That said, now that Rick Adelman is gone, we'll finally see Martin -- for lack of a better phrase -- on his own.

Among the Rockets who didn't make the list, I think Courtney Lee was the closest to cracking the group. He's not a top-100 player yet, though at some point I think he can make an appearance. He's a great defender and can shoot the ball lights out. Now, he needs to start taking control of the ball and asserting himself outside of the flow of the offense.

Marcus Morris and Patrick Patterson will have their shots at becoming well-recognized players, too. They're both young -- hell, we haven't even seen Morris play in the NBA yet -- but each's floor appears to be fairly high. Where each's ceiling lies... that's to be determined, obviously.

What do you guys think?