What's that I see in the distance? A .500 record? Mediocrity? Unfulfilled goals?

Oh yes, and it can all be ours with a win tonight in Houston. The Pistons are 3-10 to start the season, and are 29th in points per game and 30th in rebounding. Their defense is still decent, giving up 95 points per game.

It's so weird to think about this Pistons team, remembering them from the last decade when they were constantly getting to the Eastern Conference Finals and always a threat to win the title. Even though some of the players are the same, this is a shell of those Pistons, and speaks to the inability of Joe Dumars to strike a big deal to get maximum value for his core. Now, Tayshaun Prince is too old for anyone to give much for him and Rip Hamilton never drew serious enough attention when Dumars was ready to deal him.

There are a lot of exciting young pieces on this team, though. And if they can get them to stick around they can be a dangerous team in a few years, just like the Wizards. And their coach isn't Flip Saunders, so there's that. Though he was once. Anyway...

Oh, and big thanks to BD34 for covering the preview yesterday. We'll have another guest preview writer next Monday, so keep an eye out for that.

Knight isn't playing poorly for a rookie at all. In fact, 12/3/4 is pretty impressive. My issue with the pick is that it's difficult to justify drafting a point guard of the future without jettisoning either Rodney Stuckey or Will Bynum, both of whom I like. I did like Knight out of Kentucky, and I think he can be a really good player in the league, though.

Lowry looked human, and even if he does again tonight, I expect him to outplay the rookie.

Galice put me on to this picture, and he said that he though Kevin Martin had earned the right to have Calvin and Hobbes comics again. He's right, because yesterday may have been K-Mart's best all-around game as a Rocket. Also, he figured out who at the league office is accepting bribes for officials, because suddenly the calls that he couldn't get in the first 10 games are coming, and K-Mart is at his most effective when opposing players are more worried about fouling him than actually defending him. 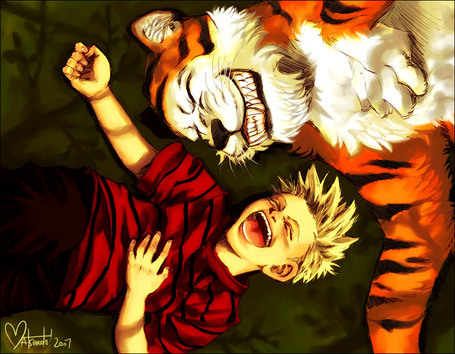 If Prince guards K-Mart, then we'll need Parsons to do a little more than normal on offense. Cuts to the basket and shots when the defense sags are important parts of Parsons game that he needs to improve upon.

Jerebko is averaging 10/6 and can shoot the three ball, but I fully expect Scola to kill him in the paint, which means we should be ready to see a lot of Jason Maxiell and Ben Wallace potentially.

Scola game is disappearing in the fourth quarter, but it's not for a lack of effort. He's still running the court and setting picks and making smart plays. I'm beginning to think his age might finally be catching up with him.

Monroe has been the bright spot for the Pistons this season. He's averaging 17/9 and shooting 58%. You can't foul him because he shoots 84% from the line and he'll make you pay. He's already made a leap in his second year. Something BD is fond of saying (or at least he said it once yesterday) is that players make their biggest jump between their second and third years. If that's the case, Monroe could be terrifying next year. Oh, and he's only 21 years old.