Share All sharing options for: Why the Signing of Samuel Dalembert Turned the Rockets Fates in 2011-12

Quick, guess the two top centers in terms of PER in the Western Conference. Andrew Bynum and Marc Gasol, right? If it's not them, it has to be Tim Duncan and Nene then. It's Marcin Gortat and Samuel Dalembert?!?!?

Yes, the man the Rockets signed hours before tip-off on opening night has been one of the two most productive centers, statistically speaking, in the Western Conference. The man best known for being an overpaid big man in Philadelphia and Sacramento has been a complete revelation in a Rockets jersey.

December 21st, the night the Rockets agreed with Dalembert, changed their fortunes for this year at the very least.

As great as PER is to see how a player is performing statistically because it weighs rebounding, steals,points and other metrics of that ilk, it relies exclusively on box score statistics and is thus flawed. By looking at our friends at 82games.com's profile of Samuel Dalembert, we see that his impact extends much further than the box score alone. 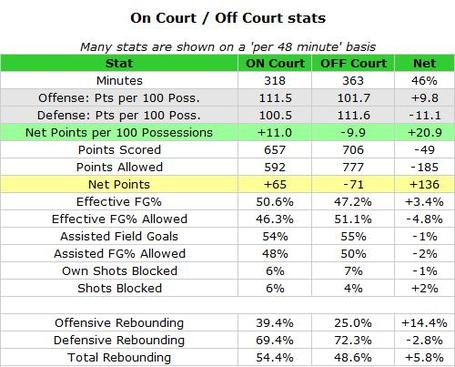 As you can see, the Rockets are allowing over 11 fewer points and are scoring nearly 10 points more per 100 possessions with Dalembert on the court.

Part of the offensive improvements with his presence have to do with the personnel around him—Martin, Lowry, and Scola are arguably the team's three best offensive players and the bench has struggled to score—but his impact cannot be understated.

He has been known to chuck up a few too many long jumpers (a 27% FG% from 16-23 ft would support this assertion), but his ability to finish at the rim, whether on put backs or quick post-ups, has helped the team mightily. His ridiculous 75.5% FG% at the rim has made the Rockets much stronger in the paint.

Essentially, his improved scoring in the paint has fueled his turnaround from a year ago, one of the worst seasons in his career. Last year, Dalembert was at just 58.1% at the rim and 34.7% from 3-9 feet. With huge improvements in both this year, Dalembert has been able to shirk the label of "offensive liability" in his stretch as a Rocket.

While his unexpected offensive surge has been a pleasant surprise, Dalembert was brought in to play defense, and he has done so exceptionally. The ridiculous 11.1 points/100 possessions difference between his on-court and off-court splits is both huge praise to the work he has done in locking down the paint and an indictment of everything Jordan Hill is trying right now.

Dalembert has shut down the lane, slowing down penetration and swatting shots away at will. His length and athleticism have allowed him to intimidate guards in the paint into weak shots or bad passes, and his ability to guard in the post have made the Rockets much less susceptible to dominant post players. If Jordan Hill were the starter at center, things would be a disaster inside.

Rahat Huq of Red94 had a great breakdown the other day of how Dalembert can help the defense even when he isn't perfect. You should go read it if you haven't, but the gist of the article is that Dalembert's length allows him to make a few mistakes but still have time to recover and make a game saving play. Chuck Hayes was an incredible defender for a man of his size, but he had to be absolutely perfect or his attempts to draw charges would result in blocking fouls. Fortunately enough for Dalembert, he was afforded a 6'11" frame and can just go fly swatting instead of charge taking.

As nice as getting Pau Gasol and Nene to Houston, Dalembert has arguably outplayed both of these star big men with meaty contracts. Instead of committing $57 million over three years for Gasol or $67 million over five years for Nene, the Rockets got Dalembert for a two year deal worth $13.7 million and only guarantees him $8.5 million. That's value right there, and Dalembert is the reason the Rockets look like pretty decent bets to sneak into the playoffs this year.

If things aren't working out by the deadline, any team would be willing to give up a pretty decent haul for a center who's good for 10 and 10 with solid defense.

No matter what they do, he wants everyone to know that calling him "the bear" is a major no-no.

Stats courtesy of 82games.com and hoopdata.com.