Cross Your Fingers For The Knicks To Keep Losing

Share All sharing options for: Cross Your Fingers For The Knicks To Keep Losing

We have to hand it to the New York Knicks. They go to all this trouble to rebuild the franchise and acquire star power and in the middle of such a pursuit, it appears they may have misfired in pairing Amar'e Stoudemire with Carmelo Anthony. What, you expected a team that sports two WTF defenders under coach Mike D'Antoni to suddenly improve on defense because they said, "Uh, we'll try?"

Maybe things will work out for the Knicks. The Eastern Conference reeks, plain and simple. But let's hope things don't work out, because the Houston Rockets own the Knicks' pick this year. The lousier New York plays, the closer Houston invariably gets to selecting a top-flight big man. Say it with me, Rockets fans: "LET'S BLOW, KNICKS!"

All signs point to New York improving its record solely because of the number of Terribles in the East. And despite their flaws, Amar'e and Carmelo are still very good players. Surely they'll rise out of the lottery. But perhaps not, if you're an optimist. Take a look at this: 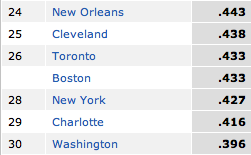 This is the RPI scorecard from ESPN, aka "How Tough Is Your Schedule?" The Knicks have played the third-lamest schedule in basketball, yet they're three games under .500. Given their conference and division, they're not likely to enter a guantlet in the second half of the year, but just looking at some of their opponents, they'll be tested more so than they have been thus far.

So, I'll put it to you guys: Will the Knicks make the playoffs? Will the Rockets regret swapping draft picks?