The Rockets begin a four-game homestand against tonight against the Milwaukee Bucks. The Bucks are 6-10 and fighting the Knicks for ninth place in the Eastern Conference. So, we should just lose so the Knicks have a harder time making the playoffs.

Just kidding. We should try to win. Because winning is all that matters. It's not whether you play the game, it's only about whether or not you win. I think that's what my high school basketball coach used to say. Granted, the guy was an jerk, so take that with a grain of salt or just disregard it altogether.

When I saw the stretch the Rockets had to end January I figured they would win more games than they lost. I thought they could get to around .500 by the end of the month and hang around in the race until late March just like always and then snag that 14th pick at the last minute. It's still a possibility, but the fact that the Rockets finally put together a really good game in Minny gives me confidence.

Also, four guards in a lineup??? Saw what? I don't expect to see this again, but I think a three guard lineup can be very effective in the league, especially this year and with this team. In fact, the Bucks are a team where we can go small, with Dalembert on Bogut and maybe Parsons/Patterson at the 4 with three guards.

And major props to The Chuckwagonhasrolledon for his preview on Monday. After I read that I knew I had to get back here and write something or else Tom would feel I was dispensable. But seriously, it was nice to read his preview and BD's a week back and get to see them from the other side. I have tests every other Monday for the rest of the semester, so I'll be creating a contest or something to see if someone wants to write the next one (February 6). I gave the first one to TCWHRO because of his prediction game and he deserved it. He's working really hard for no reason other than the fact that he's just a cool guy.

Random fact of the day: As of this writing (during the Portland-Memphis game), the top 10 teams in the West currently have a winning streak going. JUST LOSE ALREADY! COME ON!

Tip is at 7pm CST. Matchups after the jump.

I didn't expect Jennings to be this great out of Europe. He had a great rookie campaign but last year he didn't really make any progress, prompting critics to wonder whether we had seen all there was to see about the Arizona de-commit. Well, he's bounced back this year. His shooting is up (39% to 45%) and he just seems more comfortable in this offense.

And if Lowry can't handle him, you know McHale has no problem Unleashing the Dragon:

Sisqo - Unleash The Dragon (via UnknownTurko)

I have now made a Sisqo reference in a Rockets preview. My life is complete. Oh, and this is the edited version, so it's safe for work or school.

Shaun Livingston starts, but Stephen Jackson will play here. And I hate the name Captain Jack. And neither Livingston nor Jackson can guard Martin. It will interesting to see how they handle him. Maybe move Delfino down here to stop him.

Jackson was suspended for a game after missing shootaround last week. He hasn't played well since. Against the Hawks on Monday he played 28 minutes, missed his only shot, and had 2 assists and blocks, along with a rebound and steal. He was only -1 in the +/- category. He also didn't turn the ball over. I'm so confused. Such a weird situation.

And it's important that K-Mart not get a big head after playing well recently. Like Calvin.

I never know what the write about Delfino. He's known as a good defender. He's from Argentina. He can shoot the three ball, and his ESPN mugshot is hilarious. 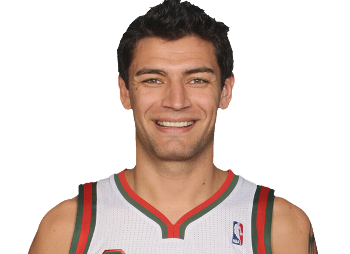 I got nothing else.

I will never forgive Mbah a Moute for being part of Heartbreak City. Never. I will hate him forever. Oh yeah, AK can hold a grudge.

Bogut had a slow start to the season, and then dealt with a concussion, but he's still gotten his numbers up to around his career averages. It's important to note that his field goal percentage is down and he's shooting 62% from the line, a place he only goes twice a game. I know a lot of fans here like him, and he's a good player. But let's assume that Milwaukee was willing to part with him (very hypothetical). Does a big man who averages 2 free throws and shoots under 46% sound like a center for the future for Daryl Morey?

Not that Dalembert is the center of the future. Just saying. Let's keep our heads here.