Share All sharing options for: Need Tickets For The Rockets Home Stretch?

The Rockets have a favorable schedule coming up. They've got four home games between now and Monday. So, why not go support them?

Houston hosts Brandon Jennings' Milwaukee Bucks, John Wall's Washington Wizards, Melo's New York Knicks and Kevin Love's Timberwolves. The Wizards game might be a bit of a blowout, but at least you'll see a win. The others, however, should prove very competitive (though if the Rockets lose at home to an awful road team in the Bucks, I'll be concerned).

In addition to our own specific deals with the Rockets, SB Nation partners with TiqIQ. They can help you find the very best deals available. Here's a graphic for ticket averages on the upcoming homestand: 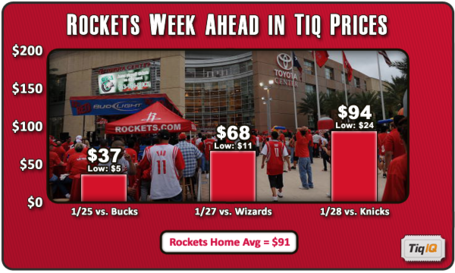 All the best deals on Rockets tickets can be found within the blog, here. Make sure to keep an eye on the sidebar button as well. Check back here for more deals throughout the year.