Yeah, you're getting one preview for the price of two. After all, the next two games are against the same team, so putting another preview tomorrow morning would be pointless. Also, I hear there's a football game on Saturday. Yeah, I'm excited to see the Lions play too but you guys all seem really hyped about it for some reason. Weird.

Actually, it's not so much a homestand as a few groups of games at home. After the Spurs game next Wednesday, the Rockets will play host in nine of their next 11 games. In fact, all 11 are winnable games. The Spurs are in there twice, but sans Manu. Portland's in there, so I don't expect to win that but stranger things have happened (33-0 at home baby!). We get both Minny and Washington twice in that stretch. There are still three back-to-backs in there, so keep that in mind, too.

You guys know I love the Thunder and Scott Brooks. Also, this whole Russell Westbrook-Kevin Durant feud needs to be put to rest. It's a distraction for the franchise and it needs to end now. So, as goodwill ambassador for the Rockets, I'd like to extend the olive branch to OKC and take the root of their problems. That's right, folks! For one night only, I'll take Kevin Durant off their hands for OAL's precious Rice a Roni and Terrence Williams!

If they call in the next 30 minutes, I'll also throw in Goran Dragic and take the rest of the cancer away. You know it! The Thunder can dump cancers Westbrook and Durant and make off like thieves! You won't get this offer in stores, and phones are ringing off the hook. But wait, we'll even throw in free shipping (er...trade exception?)!

Back to seriousness, I love the Thunder and want them to succeed, but I have Bonzo to think of, so I'm including a Sonics video here. And no, it's not all Sonics. The Rockets won this game, so relax.

Greg Gumbel! Savage Garden playing in the background! Shawn Kemp! Gary Peyton! Clyde Drexler! Charles Barkley! Oh, and I guess Hakeem was there too. It's the NBA on NBC!

You know where to find the matchups:

I'm still trying to find out more about the Kyle Lowry stuff. Suffice it to say that from the Berman story this whole thing seems stupid, and I would say that even if it wasn't the best player on the Rockets. So, yeah. We've got more than a fair share of lawyers on this board, and I'm not going to pretend to be an expert here, so their opinions and thoughts have more weight than mine at this point. Hopefully it's not a distraction.

Westbrook is averaging 17/5/5 but is turning the ball over nearly five times per game. Um, just hand it off to Kevin when you don't know what to do, buddy.

Lowry came back to Earth a little bit against the Clippers but it certainly wasn't as if he played poorly. I'm calling this even, but I am saying that the home guard will be the better player in each game, evening it out over a two-game stretch.

Thabo Sefolosha will start if he's not out (he has the flu, it seems), but he ain't the man at the 2 for the Thunder. That belongs to James Harden. I was a huge fan of his out of Arizona St. Outside of Westbrook, Harden is the only guy on the team that can create shots for other players on the team. He has great vision and is tied with Durant with the best PER on the team, if you're into that stuff.

I give up Kevin. Don't make me hate you. DRIVE. TO. THE. BASKET. If this doesn't change soon, I'll be heading over to Clutchfans and setting up some crazy trades to get you out of here. And I'm your biggest fan! You're Calvin! Patrick and I share Hobbes duties! Don't make me take this up with Watterson!

Maybe he can ask Durant how he's still getting to the line 7 times per game. 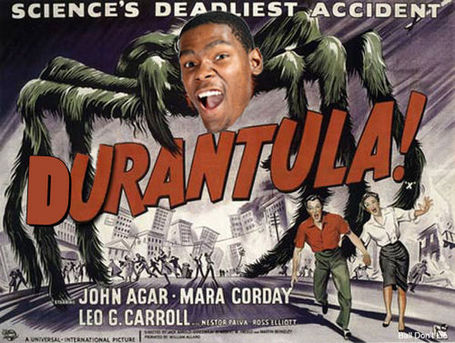 I wish Scola had a cool nickname like "Air Congo." And no, the Ice Cream Man doesn't count.

I just want to point out a couple of things that OAL put up in his post yesterday. Scola is averaging only 5 rebounds per game, which is the worst in his career. Even more troubling: Scola has attempted a grand total of eight free throws. In six games, when you're the best big man on the team? Can't happen. I know he's shooting lights out (54%), so he get a pass for now. But when the shooting slumps a little, he'll have to work down in the paint, something we haven't seen him do as much this season so far. Which is odd, since you'd think bringing in McHale would mean that Scola's post game would get even better.

If you haven't watch the last couple of Rockets games (lucky you), here's the scoop: big men do really well against little men. Jordan Hill is a little man (for a big man). Samuel Dalembert is a big man, but likes playing like a little man on offense.

I don't think Perkins will dominate or anything. After all, he barely plays more than half of the game. But he'll get plenty of rebounds even though he's only averaging four per game and he'll get easy putbacks and essentially do all the things that we hate seeing other centers do to us.

I miss Chuck Hayes tremendously. This is the right direction for the team, but I just want his toughness on defense back.

Thunder: Sefolosha day-to-day? Not really sure.

Rockets: Courtney Lee out (probably both games, but not sure)

Prediction: Quick note: Remember, you need to make 2 predictions. I may throw up a predictions thread tomorrow morning just in case, but I think it adds a little spice to have to predict two games like this before the first game so you don't have an idea going into the second prediction. Here are mine below, which won't change unless there's an injury or something major happens. Take it easy this weekend folks! And Go Texans!