Player Previews: Carlos Delfino, the man without a home

Breaking down Carlos Delfino, the player that no one expected to join the Rockets.

Share All sharing options for: Player Previews: Carlos Delfino, the man without a home

I chose to preview Carlos Delfino because I didn't know anything about him.

Case in point: When the Rockets hosted the Milwaukee Bucks last year, here's what I wrote about the Chandler Parsons-Carlos Delfino matchup:

I never know what the write about Delfino. He's known as a good defender. He's from Argentina. He can shoot the three ball, and his official NBA mugshot is hilarious. 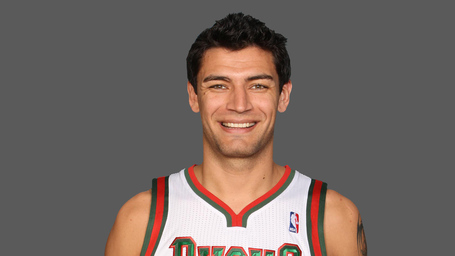 I got nothing else.

So, with Delfino joining the Rockets during/right after the Olympics, I realized that I actually had to find out more about the Argentine other than "he can shoot the three ball." Though his mugshot is still hilarious.

Join me after the jump right now to talk Delfino.

The first thing I think of when I watch Delfino play is "Old Chandler Parsons." He's 30 years old. But that's about the only major difference between the two players.

They are both known more as wing defenders than as scorers. Both have developed a three point shot (though Delfino's is ahead there) in order to stay useful on offense. Both have a rudimentary "slash" move to basket. Both look to pass far more than to shoot on said slash. Heck, their jump shooting strokes are damn near identical at times.

So why bring on a player when you have the 2.0 version of him? Are the Rockets trying to keep the Argentina audience enthralled? "Hey, we dumped Luis Scola, but now we have Delfino. Please love us!"

It's a decision that's still a little baffling. What's the point? Well, here it comes.

Delfino is a stop gap.

The Rockets are loaded with young talent. Mainly, that talent lies in the shooting guard and power forward position, with the ability of a few guys to play small forward (supposedly). Delfino is the oldest player on the team (think about that: a 30 year old is your oldest guy) and can play the 2 and 3 while some of the younger guys can develop.

What's more, he allows a little flexibility for the team. There are a lot of swingmen in the NBA, but as McHale has said, it's not about what you can, but who you can guard. Delfino can stay with 2s and 3s. Add in the fact that Parsons can guard 2-4s, and you kind of see an idea forming. If the Rockets want to go small, they can send out Lin, K-Mart, Delfino, Parsons, and Patterson. If they want to go big, take out K-Mart (I see you smiling Mike!) and throw in Asik. Offensively it's a lineup with limits, but it's also a young team where Lin may be doing everything anyway.

Down the line, Delfino can come in and be a spark off the bench and provide depth. That's what he's doing now, but the point of having a guy like him is to make everyone else better and to give the team options. In that regard, he succeeds.

What do you guys think? Should he just be relegated to the bench forever, or can you envision him getting serious minutes with this ballclub?