Welcome to Year 6 of the Dream Shake

With the Rockets tipping off tonight, October 31, 2012, the Dream Shake now begins its sixth (yes, *sixth*) season of covering the Rockets from all angles. Goals have been accomplished (bye, bye Rafer!)... and some have yet to be undertaken (Robert Horry HOF in 2013!)... and we still keep chugging along.

Share All sharing options for: Welcome to Year 6 of the Dream Shake

Jeff Van Gundy was no longer the coach.
Coach Sleepy had arrived.
Tracy McGrady was settling into his role as a non-dunking 3-point "artist."
.... And Rafer Alston was still the starting point guard for our beloved Houston Rockets. 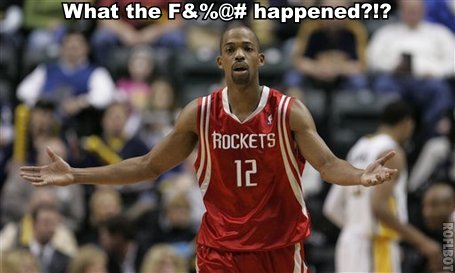 I have never before hated an athlete from a Houston professional sports team so much. I needed an outlet to vent this frustration. An email was sent to my friend Lee:

"Do you know of a good Houston Rockets sports blog?"

"That is an excellent idea."

15 minutes later, after debating potential blog names for about .00005 seconds, The Dream Shake was born. Lee and I registered the name with Blogspot, even though some dirty squatter already reserved "dreamshake.blogspot.com." The only condition upon this interwebz partnership? I would write the first article, and it would be a plea for the Rockets to get rid of Rafer Alston. As fast as possible.

Fast forward to February 19, 2009. Rafer is traded to Orlando for a backup PG named Kyle Lowry as part of a three-team deal. Not only did the Rockets accomplish my one and only mission for the blog, but Daryl Morey continued what he started in 2007 by swindling San Antonio for the rights to Luis Scola - he hookwinked yet another team for a talented player that was being misused. A trend that continues today - even though the James Harden trade has yet to pay immediate dividends, "in Morey I trust."

Tonight the Houston Rockets tip off the 2012/2013 regular season. In the process, this means this will be the sixth year the Dream Shake has been around to document all of the proceedings. (It is our fifth season with SBNation.) For those that have been around since '07, we thank you for your support. For those that are somewhat new, or are only here because of the "10 reasons to despise the Los Angeles Lakers" post I wrote in 2009 - welcome.

Settle in. Have some fun.

It is not all previews and recaps here. We leave that mess to ESPN and the Comicle. The Dream Shake exists to provide an additional perspective. One from the peanut gallery and the comfort of our couches at home. (No, not Joey Dorsey's couch.) When Kevin McHale makes a bad decision, we do not cut him any slack. Instead, we blame him for wearing a purple tie when his team is facing the goddamn Lakers.

In 2007, I dedicated a lot of time to writing zany articles about the Rockets. I wanted our blog to be nothing like anything anyone else had on the Internet. Lee and I posted continuously that first year - only to realize that we were 30 years old and needed help. Generating good content can be quite an exhausting task.

In December 2008, we brought Tom on board.
From there, the site has only grown.

I eagerly anticipate the 2012-2013 season. Sadly, I am 35 years old now. I have, like, a job and stuff. Damn. I cannot write and contribute to TDS as much as I did before. I will contribute when I can. As usual, it will probably be reserved for ranting and raving about bad coaching decisions and players I hate, but I would not have it any other way. I refuse to publish half-assed content, so Tom has brought on additional staff to fill the void, including SBN's required previews and recaps (zzzzzz...). There are now 10 writers and 4 staff members ready to contribute when needed. The Dream Shake should never be quiet.

The vibrant commenting section is a major reason for our success, too. Thank you to all of you. Or, at least those of you who contribute meaningful conversation. Those of you that exist to troll the writers and other commenters can kindly go [censored by SBN legal staff].

Just remember the basic ground rules for the site:

(a) The Utah Jazz are evil. I really, really hate them.

(b) Anyone who insults or questions the greatness of Robert Horry is insta-banned.

(c) The Hakeem-era Rockets would have crushed the Jordan-era Bulls. This is not a debate.

(d) He may no longer write for the Comicle, but Richard Justice is a no-talent assclown. (That new Harvey guy is trying very hard to be a bigger assclown.)

(e) Daryl Morey is like a genius or something. If you question him or his decisions, it says far more about you than it does about him.

Anyway, enough babbling. Tip off is only half a day away! 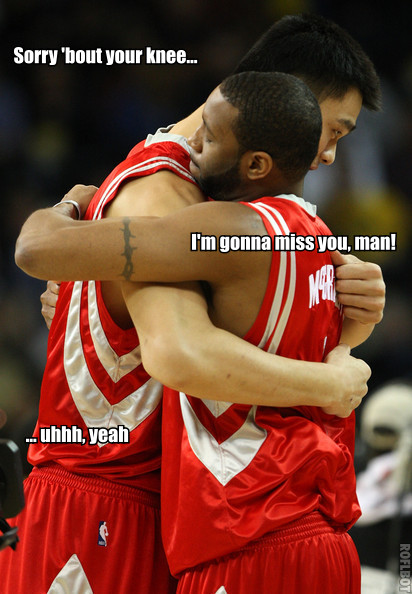