James Harden and the Curse of Hero Ball

The Rockets' explosive start to the season behind the arrivals of James Harden, Jeremy Lin and Omer Asik has quickly eroded behind a series of questionable play and, curiously, a stunning lack of bad decisions and selfish play on the part of the bearded one, Mr. Harden. The end of the Miami game last night only accentuated my new biggest fear: that James Harden's desire to be "The Man" has made him vulnerable to the trappings of Hero Ball.

Share All sharing options for: James Harden and the Curse of Hero Ball

On the evening of Saturday, October 28th, Daryl Morey shocked the world[1] and traded seemingly half the Rockets' roster, multiple draft picks and maybe even the rights to his first-born son to Oklahoma City to acquire Cole Aldrich potential Restricted Free Agent James Harden. Almost immediately the Rockets signed James Harden to an $80 million contract over five years. Overnight, James Harden went from being the Sixth Man and third option on a team that was in the NBA Finals to being the centerpiece and first option for a team that is in full-on rebuilding mode. Many questioned whether Harden would be able to handle the transition.

Three days after the trade, Harden and his beard took the court on Halloween night in Detroit.[2] After a jaw-dropping fourth quarter performance, the Rockets blew out the Pistons. Harden finished with 37 points. No, not in a row. That would be a record or something.

Two days after that, Harden topped his debut and dropped a cool 45 points on the Hawks. The Rockets impressively won again after another strong fourth quarter behind Harden and Jeremy Lin.

Suddenly, James Harden was the toast of SportsCenter and every article written by the Comicle. It led to a highly-anticipated home debut for Harden against Portland the following Saturday. These expectations were met with a resounding thud. The Rockets lost 95-85. Harden got his 24 points, but it took 24 shots to get there, including a sickly 1-6 from the three-point line.

From there a trend seems to have emerged. Or has it?

Last year, James Harden averaged a cool 16.8 points per game but in only 31.4 minutes of action and on only 10.1 FGAs per game. He is and was the epitome of a high efficiency player.[4] Yes, it helps to play with Kevin Durant and Russell Westbrook, but the advanced stats showed he was even more efficient without those two on the court. The question is whether this mindset and skillset can be translated to being The Man while also being the focus of every opposing team's defensive strategy. For two games, Harden defiantly raised two (figurative) middle fingers to any doubters. Since then, he has provided ample ammunition for criticism. The Rockets have gone 1-4 and Harden's efficiency has fallen off a cliff.

The Rockets are currently 3-4, having dropped a close game to Miami in the closing minutes last night. We will get to that game in more detail in a second. Meanwhile, Harden's (truncated) box score looks like the following for all seven games this season (to date):

Harden has not even remotely approached the production level from his first two games. Maybe opposing teams were initially caught off guard. Maybe the advanced scouting reports caught up to Kevin McHale and Kelvin Sampson (very likely). Maybe Harden is tired (he did skip interviews this week - something Hakeem never did in 17 years in Houston). Maybe Harden is still trying to balance out being the Man without sacrificing what makes him great to begin with. It is all plausible. And before anyone claims that this is to criticize Mr. Harden, it is not. His life has been thrown into upheaval over the last three weeks. To expect him to go from bench player to Michael Jordan overnight is ridiculous and unfair. But $80 million contracts tend to bring a lot of attention and critical analysis. Harden knows this and has to accept it.

Nevertheless, there is no excuse for Hero Ball. Which is precisely what James Harden has become prone to over the last five games. The Miami game being Exhibits A through Z. I am terrified that Harden is trying to become a poor-man's Kobe.

First, a disclaimer: I am a huge, HUGE Kobe Bryant fan. He is amazing. James Harden, however, is not Kobe Bryant. This is a good thing. Even if James seems to be trying really hard to impersonate Kobe's game over the last ten days.[5] James Harden made a name for himself in his first three years in the NBA by being an efficient two guard. Be it through making clutch shots, smart decisions and/or distributing the basketball to his teammates without being too unselfish. James Harden kept defenses off balance. He almost single-handedly ruined San Antonio's playoff run last year. They just could not figure him out. This is because James never let the defense dictate to him what he had to do on offense. He put the pressure on them first and made the opposition react to him.

Suddenly, this has reversed. If you noticed during the game last night, the Rockets had a surprising eight point lead with just under three minutes remaining. The Rockets' comeback and subsequent lead was actually built while Harden was not even in the game. Marcus Morris, Chandler Parsons and Carlos Delfino were the primary reasons the Rockets were busting up the Miami Heat. (I would add Omer Asik to that list as well, but Kelvin Sampson apparently hates him and refuses to put him in the game during important times.)

Harden re-entered the game with a handful of minutes remaining. He almost immediately jacked up a contested three-pointer with a lot of time on the clock. Then on two separate possessions with less than two minutes to play, Harden just held the ball beyond the arc on the left side and watched the shot clock drain down to 5 seconds. Ball movement entirely ceased to exist. All eyes were on James Harden. Including all ten eyes of the defense. This is not good.

This is everything James Harden is not supposed to be. This is analogous to Evil Cartman (or Evil Abed). Hell, James should have shaved his beard before the end of this game so the fans could at least have a clue what was coming. 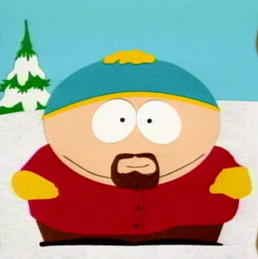 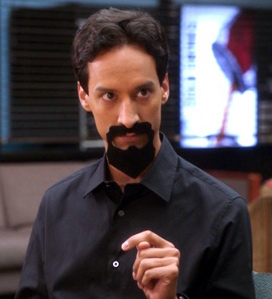 I hate Hero Ball. But this is the style of offense that has permeated the NBA in recent years. And not for the better. Just because you are declared The Man does not mean that you should stop running plays and instead run isolation sets with five seconds left on the clock before jacking up a contested shot. These are not high-efficiency plays. Even if you make the miracle shot, you are making a mockery of Daryl Morey's analytical approach to basketball. Hero Ball is the offensive equivalent of running the prevent defense in the NFL - it only makes it that much easier on the opposition to game plan around. It very rarely leads to victory.

The biggest myth in the NBA for years has been that Kobe Bryant is the NBA's most "clutch" player. It is not true. Every single statistical metric demonstrates that Kobe is highly inefficient at the end of games. Kobe is merely a high-volume shooter in the closing minutes. For every "game winner" he makes, he misses many, many more. In the last handful of years, he has even shot his team out of games trying wacky long-distance shots early in the possession. It is simply bad basketball. And, remember, I love Kobe, but that is just inherently inefficient and you have to be Kobe or LeBron to even remotely justify taking such an approach to the game. (No, Carmelo, you do not count. Now go sit back down.)

I am terrified that James Harden thinks that being The Man means falling prey to Hero Ball. He is better than that. James Harden is, in fact, the antithesis of Hero Ball and this is presumably why Daryl Morey moved mountains to acquire his services. The Rockets are a much better team when the ball is moving around the perimeter and the secondary players are involved in the action. It keeps everyone off balance. Hero Ball, even when led by James Harden, only leads to clunky possessions and, eventually, really ugly Jeremy Lin airballs on wide open shots.[6] We just cannot have that. Hero Ball is a virus. I fully believe James Harden is the antidote to that but last night's game suddenly makes me nervous.

[1] I am still slightly annoyed that he did this during the middle of a really great night for college football games. I already had enough distractions (read: gambling) to consume my thoughts.

[2] I am glad he survived Devil's Night. Maybe James Harden is also the Crow?

[3] The Dream Shake does not advocate or authorize the use of the phrase "Fear the Beard" as this is a federal trademark owned exclusively by Brian Wilson, that nutjob closer guy from the San Francisco Giants. Really.

[4] Yes, I realize these are precisely the same attributes we gushed about after trading for Kevin Martin.

[5] To be fair, Kobe has made a career of mimicking Michael Jordan. Might as well steal from the best, right?

[6] Moral of the story? Jeremy Lin is no Robert Horry.

[7] Asik not being on the court for offense/defense on Dwyane Wade's second FT attempt is criminal and should preclude Kelvin Sampson from ever being a coach at the highest level again. It is that egregious of a mistake.