The Rio Grande Valley Vipers have released this season's training camp roster. Here's a look at the notable players to keep an eye on.

The Rio Grande Valley Vipers and the Houston Rockets have always made noise in the transactions column together. Perhaps no NBA team uses its D-League team as often and as effectively as do the Rockets, who are known to send players down to develop, as opposed to leaving them rotting on the professional bench.

The Rockets also make call-ups quite frequently — at least compared to other NBA teams. So with that in mind, let's take a look at the players RGV selected to its training camp roster. 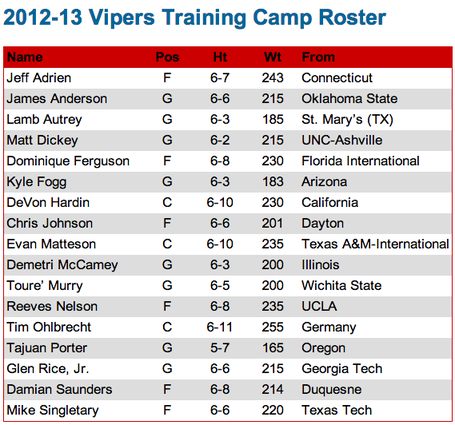 You may be familiar with a few of these names, but in case this all looks like gibberish to you, don't worry. There are some really intriguing players here. A few that stand out:

James Anderson: A former 1st-round pick of the San Antonio Spurs, Anderson starred as a scorer at Oklahoma State. At 6'6, he's got great size at the shooting guard position. He never really found a groove with the Spurs, but he certainly has NBA talent. Should things improve, he could be an option down the road as a backup shooting guard if Carlos Delfino struggles.

Chris Johnson: The Vipers made Johnson its 1st-round pick in this year's D-League Draft, and they seem pretty excited about him. Here's what Vipers GM Gersson Rosas had to say about Johnson, a former Dayton Flyer (via The Monitor):

"He's has a good all-around game," Rosas said of Johnson. "He's a good shooter. He's a system fit for what we want to play. He defends and rebounds. He's a player we see with NBA potential. We think (the Vipers) will be a good home for him to develop."

Rosas added that if Johnson can improve his three-point shot, he has a great chance to make a roster at some point.

Demetri McCamey: The Rockets brought McCamey in for a bit during the offseason. He's a talented guard out of Illinois, but the thing with McCamey is that he always leaves you wanting more. His talent isn't the question, but rather, will he produce on a nightly basis? Risks like him, however, are certainly worth bringing into D-League training camp.

DeVon Hardin: Hardin is a big body out of Cal. The Seattle Sonics took him in 2008, but he got injured and never found time with the team afterwards. He's been playing overseas ever since, but at 6'11 and with a nice college resume, Hardin could be a sneaky-good addition to this roster.

Jeff Adrien: We know Jeff Adrien from last season. I've tried to popularize the Jeff Adrien Line, in which a player can successfully record more fouls than points. Adrien, quite the workhorse inside, never seemed to control himself from fouling at the NBA level, but against D-League competition, he routinely dominates.

There are a lot of players here, guys who could get call-ups should the Rockets get struck by the injury bug. But the pro roster as it stands now is crowded with young guys who need to see time, so I'm expecting a little less RGV-in-the-NBA this season just because of that.