The Rockets are one of the worst teams in the league defensively. A look at the film shows why.

Despite their youth, the defensive struggles are still surprising. Omer Asik is one of the top defensive big men in the league, Patrick Patterson has been considered a stalwart his career (though he has struggled as of late), and Chandler Parsons is a tremendous wing defender at 6'9". Though Harden and Lin have never been considered top flight defenders, they are not the glaring liability that Kevin Martin was in his last couple of years with the Rockets.

However, in looking at the tape, it's clear that this young team does not have the technique or awareness of a veteran squad. Today, we'll look at that tape, showing how this lack of awareness has led to a number of wide open spot-up threes.

Check out this play (click on the pictures for a larger version): 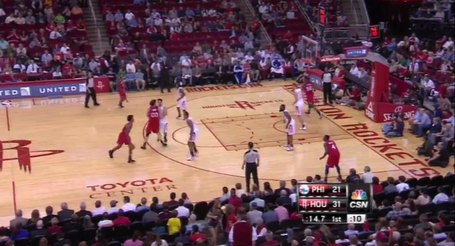 In this look, Nick Young gets the ball in the middle of the court and receives a pick from Spencer Hawes. Greg Smith shows on the pick, trying to cut off Young's drive to the basket. Harden is in help position, able to contest Young at the basket if he gets the corner on Smith. 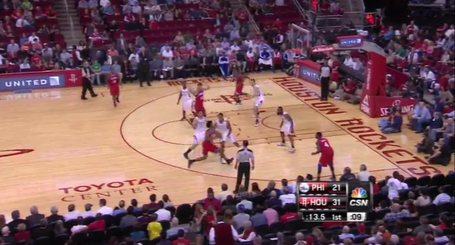 At this point, Smith and Delfino have Young bottled up, forcing him to pull up, but Harden remains next to the paint, some 10-15 feet away from his man. Because Harden is stuck ball-watching, even Nick Young can see that he has a no-brainer pass to a wide open Dorell Wright. 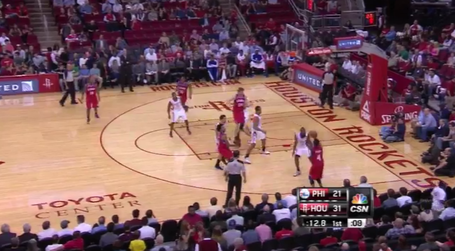 At this point, Harden can't even get a hand up to contest Wright's three. Predictably enough, the shot splashed to cut the Rockets lead to seven.

This was a simple mistake caused by laziness and a lack of awareness, and it gave the Sixers a wide open three pointer that they converted on. As Harden's man was just one pass away, his help positioning was far too close to the basket. As Harden likely learned in youth basketball growing up, if your mark is one pass away, you must stay close enough to contest his shot if he gets the ball. This requires you to watch both the man and the ball, but Harden instead fixated on just the ball, leading to the three pointer. Unfortunately, as we'll see later in this post, Harden has a propensity for this kind of play.

In this next play, we see how over-aggressiveness can lead to a wide open look: 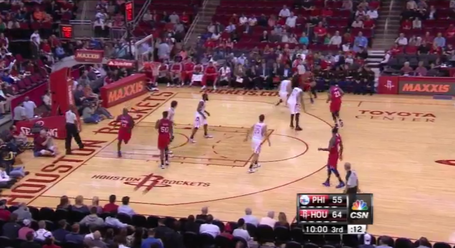 Here, de facto point guard Evan Turner has the ball on the far side of the court with Jeremy Lin guarding him. Chandler Parsons and James Harden, with their men well off the ball, are in good help position, with their bodies positioned between their man and the ball and with their bodies oriented so they can see both.

As we go forward, you'll see a breakdown on two accounts. 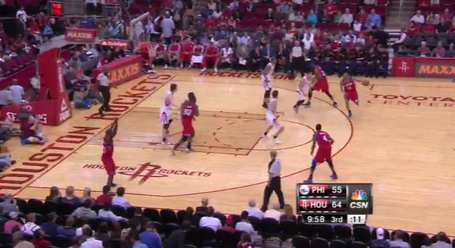 As Turner gets a pick from Young, Parsons slides to cut off his drive, in the simplest sense, "stopping the ball." However, James Harden is now completely lost as he hasn't recovered at all to his open man, leaving a wide open passing lane to Jason Richardson in the corner. Harden is lucky that Turner misses that look (Parsons was also lurking in that lane, but it's no excuse for Harden), but as we see as the play develops, this was not the only problem the Rockets had on this play. 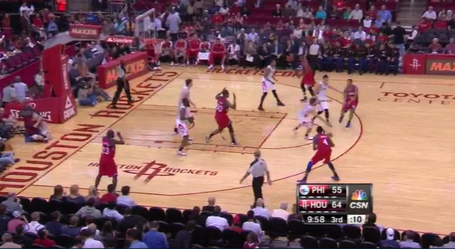 Here, Turner is covered up by Jeremy Lin, who has recovered around the pick well. Turner throws a bounce pass to Dorell Wright, one an overzealous Chandler Parsons tries to steal. After Parsons comes up empty on the steal, Wright finds himself wide open, and the proven shooter knocks it down once again. 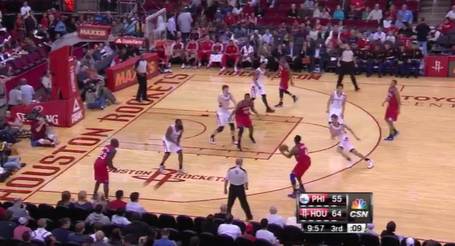 Parsons simply made it way too easy on the Sixers to score here. He was in perfect help position, with plenty of time to recover if he hadn't gambled on the steal, and after the mistake, the Sixers make him pay.

Gambling for a steal isn't always bad; it's especially good when you're out of position and have a chance to bail yourself out. However, when you are in good position for a contest, it makes no sense to go after a pass like that that you have little chance of stealing.

Finally, we come to a play where over-aggressiveness and miscommunication leads to a wide-open three: 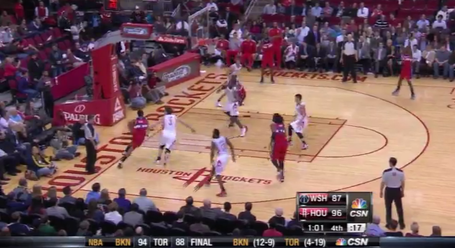 We see Bradley Beal driving on Omer Asik, as James Harden has been picked off by Nene. Patrick Patterson is at the rim to contest, and Jeremy Lin and Chandler Parsons are in help position.

So far, all is going pretty well. Perhaps Lin is giving Jordan Crawford too much space, but he has to come in to help Asik out on Nene, so it's difficult to say if he's out of position.

As the tape goes forward, we see the breakdown. 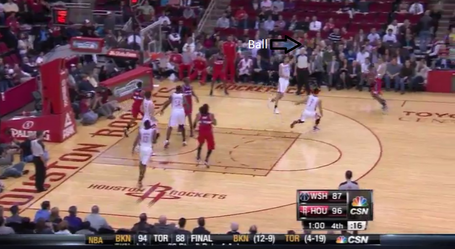 Beal throws a pass out to Jordan Crawford who is spotting up at the three point line. Parsons, as he has done far too often, gambles and tries to steal the pass, leaving Martell Webster open in the corner. Lin was in perfectly adequate position to go out and contest Crawford at the three point line, but the two miscommunicated, leading to the next frame. 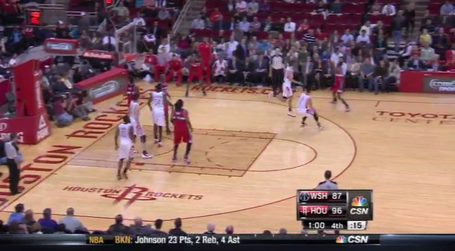 Jordan Crawford has the ball in his hands as an out of control Parsons runs by him and Lin is trying to decide where to go. 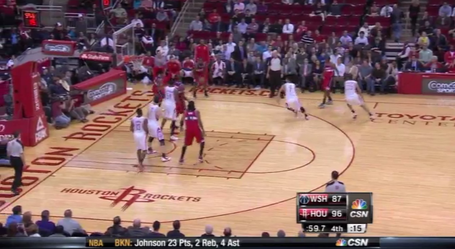 By the time Lin recovers to Martell Webster, it's too late. Webster rises up and hits the jumper, bringing the Wizards to within six with a minute remaining. As has been a bit of a troubling trend, Harden is hanging out in the paint miles away from Bradley Beal, his mark.

This breakdown was caused mainly by the gamble, but the miscommunication between Lin and Parsons also played a major role. If Lin had called Parsons off, perhaps this play could have been avoided.

Perhaps with more time these breakdowns will become less and less prominent, but the Rockets defense is going to take a lot of work if they want to achieve their stated goal of making it a top ten unit. Asik has managed to keep the inside defense respectable almost on his own, but on the outside, the Rockets cannot afford to make such simple mistakes.