The Rockets take on the Chicago Bulls tonight. Check out The Dream Shake's game preview.

The Rockets played the Bulls right before Thanksgiving in Houston.

Tonight, they play in front of a national audience on Christmas at the United Center.

The Texas Tech Surgery Club went to Chicago this year in early October and I was able to go too. First off, Chicago is a ton of fun.

But most importantly, I made the trek out to the United Center to see the Jordan statue (aka "The Spirit"). So, for your viewing pleasure (or disgust), this is me in front of the arena reenacting the statue's pose.

And yes, I was wearing my Houston Rockets hoodie, because even in the heart of Chi-City I'm Rockets 'til I die. 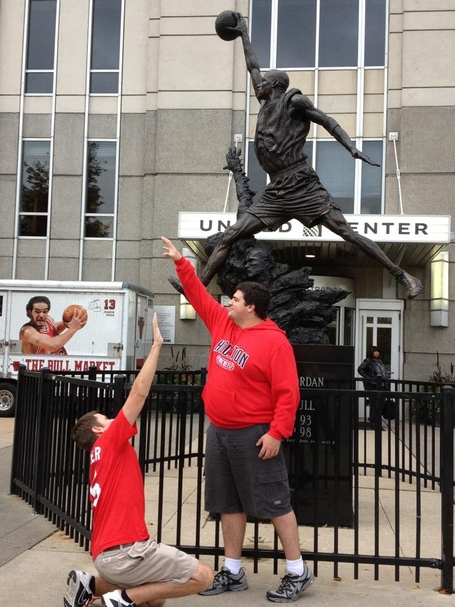 Finally, happy holidays to everyone and Merry Christmas to those who observe it. Thanks for taking time away from your families and friends to check out our site.

In fact, that may have been when he made the change.

And as for the poll question last time, it was kind of a trick question. But here's the deal: the Rockets will pay Lin ~$15 million in the third year of his contract, but the cap hit is $8.3 million. Had the Knicks re-signed Lin, both the salary and cap hit would have been $15 million.

What's been bothering me is that writers keep talking about how impossible it will be to trade Lin in two years because of how much he'll be owed (true and false, technically), but they also talk about how the Rockets cap will take a major hit in two years when both he and Asik will combine for $30 million of cap room (FALSE!).

Writers are stupid. Editor's note: Unless they write for The Dream Shake.

Rip Hamilton is injured and should be returning soon, but won't be available tonight for the Bulls.

Harden has to attack the basket just like he did against the Grizzlies. The Bulls play great team defense and won't let him waltz in, but if the Rockets can get out in transition they might steal this one.

Deng will likely be stuck on Harden while Parsons will have free reign to score if he so desires.

It's important that he desires scoring tonight.

I still hate Carlos Boozer. How did he get an all-defense vote last year? It's a travesty I tell you!

Marcus Morris has impressed the crap out of me. He's quickly turning into a player that teams will ask to be included in any deal. And what's hilarious is that he was a deal-breaker for Orlando in the Dwight Howard deal.

Last year if I had told you that Morris would be a valuable member of the club and would be starting at power forward and holding his own, you would have laughed at me. Heck, I probably wouldn't have been able to complete the sentence because I would have been laughing.

I like Noah a lot. The Bulls had an abundance of riches at big men with these two and Taj Gibson. They chose Gibson over Asik, and Rockets fans are very grateful.

I can't wait to see these two guys fighting for rebounds. It's going to be a blast.