The sad excuse for an All-Star Weekend is over. The Rockets take on the Toronto Raptors (10-23) tonight at the Toyota Center. The Raptors are one of those teams that seem to have the Rockets number, especially when the game takes place in Canada. In Houston, the Rockets generally win. Either way, this is a game the Rockets are "supposed" to win.

Here are my key storylines for the second half of the season regarding the Rockets. Note that I was very paranoid when I came up with these, and the conspiracy theorist in my came out to play.

1. When will David Stern realize that the Rockets are in playoff contention?

2. What will he do to make sure that it doesn't happen?

3. If he goes with the usual injury route, who gets injured?

4. If he goes with the "referee bias" route, over/under 20 foul shots for K-Mart for the rest of the year?

5. When the league starts making sure that the Rockets aren't anywhere near the playoffs, how much will Rockets fan panic and attempt to trade everyone?

6. When will AK stop being so paranoid about how the NBA hates the Rockets?

Matchups after the jump. Tip is at 7pm CST.

How much do I love Daryl Morey? Here, try this:

Speculation is rampant that Morey is trying to trade for DeRozan because he is from the draft class of 2009 and Daryl Morey loves that draft class like Dave loves Robert Horry and Xiane loves Greg Smith.

Both of these guys can score, but in very different ways. K-Mart is content to shoot jumpers while DeRozan is an attacker whose jump shot isn't exactly stellar. Both can get to the line (unless Stern steps in).

I'm too confused by K-Mart's recent play to give him the advantage, so we'll call it even.

Though this picture of DeRozan from last year's dunk contest in wonderful. 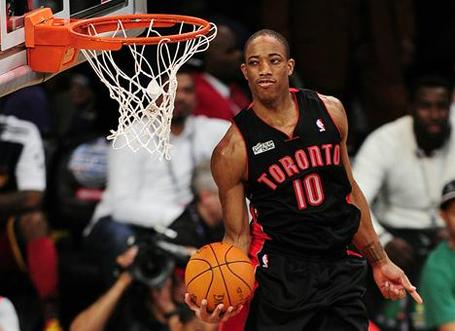 Yep, Parsons is starting to get advantages! Crazy! Though it does help that the small forward is possibly the weakest position in basketball in terms of parity. Well, that and center, I guess.

Remember when the Rockets were interested in Amir Johnson? I think we made out okay.

Scola should abuse him in the paint.

Bargnani was out leading up to the All-Star break and is expected back tonight, last I heard. He's having a career year, averaging 24/6/2 with a PER of over 22. He's shooting 48% from the field, and for a guy who takes plenty of jump shots and three pointers, that's a fantastic average.

He's going to stretch the court and may force the Rockets to go small throughout the game with Patterson at the five instead of Dalembert or Hill in order to keep him from having wide open shots.