Maybe one day we'll remember it as The Stomp That Woke Up the Rockets.

Not to put too much into one game against a ridiculously undermanned Nuggets squad, but the question begs to be asked: did Kevin Love stomping on Luis Scola's face wake up our friend from Argentina? And maybe even more importantly, did it snap Kyle Lowry out of his funk?

I thought on it, and woke up remembering that I had read something about the two of them. So I scoured Rockets.com's news archives along with Feigen's articles at the Chronicle until I found what I was looking for, a quote by Lowry after a win last season.

"Me and Luis, we have this kinship with the summer with us both signing the same day," said Lowry, who had eight of his assists on passes to Scola. "We joke that we'll always have something in common, getting our second deals, our big deals, together."

I found this very telling, and it reinforced my beliefs that Scola and Lowry feed off each other a lot. When one isn't playing well, it doesn't bode well for the other. And before you say, "So what they signed on the same day? They could hate each other," I would say that anyone who watches this team sees that they clearly are fond of each other. Add in the fact that both are blue-collar, hard-nosed, high-motor, hyphenated-cliched players and you can conclude that they probably have a lot of respect for each other. And that passes the eye test as well.

So we head back to Minny, where Love stomps on Scola. Then suddenly Scola plays with an intensity that we haven't seen from him in the second half of games this year. Kyle Lowry awakens from his comatose state and decides that he's really good at basketball.

Cut to Monday night, and the Swagger Lowry was back in full force. Though he was spectacular all night, I think you can sum up his performance in one sequence of events.

In the fourth quarter, with 3:22 to play and the Rockets nursing a seven point lead, Lowry was stripped by Al Harrington, who scored a layup on the fast break. Lowry immediately turns to the ref to complain that he got hacked (he was), but play resumes, and the Rockets ran a play out of the Adelman playbook. And so, here is AK doing his best impression of Sebastian Pruiti (who used to run the fabulous NBAPlaybook.com and now writes for Grantland):

The Rockets ran a high off-ball screen by Courtney Lee (2) for Lowry (1), who then takes the handoff from Scola (4) behind the three point line at the X.

Now here's where it gets interesting. With 9 seconds left on the shot clock, Lowry has the option to drive, especially if Lawson goes over the screen. As you can see, if Lowry wants to run by Scola and use him as a screen to drive, he could potentially have a three-on-two situation where he can take it for a layup or dish to Patterson (5) or Bud (3) if the help defense comes. Of course, Lawson went under the screen, and Lowry made him pay.

For the last couple of weeks, that would have been the right call. Lowry was ice-cold from three heading into this game. But it's almost like something happened in Minnesota to wake him up. Bill Simmons likes to talk about the Eff You three pointer, and some of you guys mentioned it in the game thread. Well, Lowry told the Mile High City "Eff You AND Kevin Love!" with that three ball.

Oh, and tonight the Rockets play the Trail Blazers, who are coming off a tough overtime defeat to the Oklahoma City Thunder. No shame there, and the Thunder are pretty good, but there was a goaltending call that eventually sent the game into overtime. Yesterday, the league admitted that the block was clean, so the Blazers should have won in regulation. That sucks. The Blazers are still an incredible 11-2 at home, and they lost those two games by a combined 7 points, and one of those you could say they didn't lose. But that's basketball reasons for you.

The Blazers, like the Rockets, Lakers, and Mavs, sit at 14-11 and are just a few wins away from creeping into the top 4 in the West. With how wide open the season has been, every win is important. If the Rockets can get through this road trip at 3-3 rather than 2-4, it could make a huge difference down the line.

And before the matchups, major thanks to Patrick for covering the Nuggets preview. When he writes the preview, the Rockets are 1-0, BD is 2-0, and TCWHRO is 1-0. I'm 10-11. If this keeps up I may have to give up the previews altogether for the good of the Rockets.

Raymond Felton is day-to-day, and missed the OKC game. Crawford started in his spot. Crawford is definitely more shooter than facilitator, but when your offense runs through the post, your point guard just needs to bring the ball down the court and not do anything too stupid. Obviously, Crawford is a streaky shooter and can make any team pay if he's feeling it. He didn't feel it last game, and the Jamal "Craw-ful" nickname might just catch on around the league.

I think Matthews drew Lowry last time on defense, but I could be mistaken. If it's Felton, Lowry should be able to play his game without issue. But this is a matchup to watch, no doubt.

Matthews is a pretty good shooter, plays defense, and brings a quiet intensity most nights, just as he did at Marquette. I'm a big Tom Crean fan, so I watched more than my fair share of Matthews when he was in college. He went undrafted and signed as a free agent with the Jazz. But then after one year he got out of Utah as fast as he could, thereby re-earning my respect. Also the Blazers were able to get him partially because of how they forced the Jazz to match their offer for Paul Millsap, which left them little cap room to match their offer for Matthews.

So, the Blazers screwed over the Jazz twice in a 12-month period. Just another reason why they are my second favorite team.

Oddly, this is the same face I've made while watching Kevin Martin during these last two games: 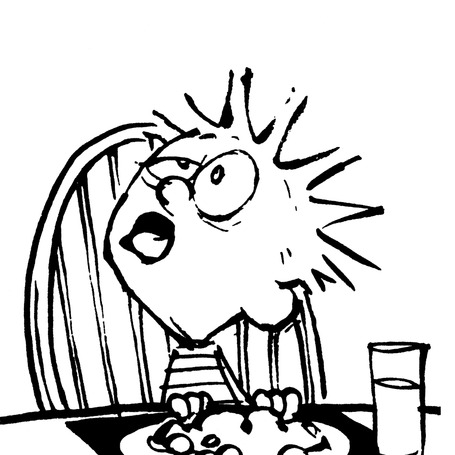 Also, you guys haven't heard my Brandon Roy career eulogy yet, and I'll make it quick. I loved Brandon Roy. I own one NBA jersey, a Brandon Roy Rip City throwback jersey. I don't think I ever had as much respect for a player who continued to kill the Rockets throughout his career. I was so glad when Kevin Durant hit that three to beat Dallas this year because there was something to finally replace the highlight of Roy's winning three against us, which the NBA managed to put in EVERY SINGLE COMMERCIAL IMAGINABLE! "Hey, you should totally go to NBA.com's team shop and buy Kobe Bryant and LeBron James jerseys. And just for kicks here's Brandon Roy cutting out AK's heart while AK thanks him for being such a professional." Anyway, I'm glad that video is gone, but I will always have this one. Have you ever seen a player dominate a fourth quarter so completely in such a big game? I'm trying to remember, but I'm coming up blank.

Roy Takes Over : The Movie (via pinwheelempire)

Wallace always seems like a feast-or-famine kind of player. He's either going to be high usage, or he's not going to do much at all. He's a bit of a conundrum, but that's to be expected from a guy who played in Charlotte for most of his career. Against the Thunder, he went 2-9 for four points, and threw in a couple of turnovers and five fouls.

But he tag-teamed with Nic Batum to hold Kevin Durant to 33 points (wait for it) on 33 shots and caused the Durantula to have five turnovers. Even when he isn't killing you with points, he's killing you with his song intensity.

Hmm, what is there to say about Aldridge? He's really good, definitely an All-Star, and should have a realistic shot at making the Olympic team.

What do you think, Luis? 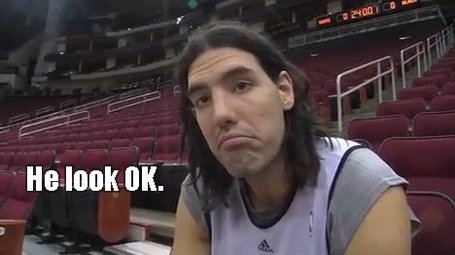 Camby was hurt the last time these teams met, and the Rockets used that to their advantage, attacking the paint at will. Kurt Thomas couldn't patch the hole that Camby's abnormally lanky arms occupy. Tonight, Camby will be there and the Rockets will have to contend with the issue. And I just found out he has bronchitis and listed as "probable" for tonight's game.

So now Dalembert has hit the wall, if you will. I guess it was his turn. After starting off the season scorching hot, Dalembert has started to play like...Samuel Dalembert, and that's what I expect to see from here on out. Usually good, sometimes not, and on rare occasions great. That's fine, but the Rockets will need others to step up, as Jeff Adrien did in Denver.

Make sure to head over to Blazer's Edge, one of the best blogs on the net. Great people, great atmosphere, and great discussion.