Rockets Will Try To Show Derek Fisher That He Misjudged Us

Share All sharing options for: Rockets Will Try To Show Derek Fisher That He Misjudged Us

It's the Derek Fisher Bowl!

Or the Jordan Hill Bowl.

Or the "Teams Rick Adelman isn't a huge fan of" Bowl.

Basketball needs its own version of "bowl." And not something stupid like "invitational." I'm not inviting you anywhere, so don't pretend like we're buddies.

Okay, so the Lakers come to the Yote tonight. At first, I thought they might be on a back-to-back, then I remembered that we're the Rockets so I started laughing instead. If there's one thing I'd like Daryl Morey to trade for, it's a schedule where we get some nice breaks. Wouldn't it be nice to be lucky every once in a while? Could that happen for us?

But we can't feel sorry for ourselves. We get an angry Lakers team that just lost at Staples to the Jazz. And that's with a free throw discrepancy of 40-22. And despite the fact that Andrew Bynum went 33/11 on 12-14 shooting. Or that Ramon Sessions, in his Laker debut went 1-7 but was given a warm LA welcome with 10 free throws. And despite the fact that Matt Barnes (of all people!) went 12/8/6.

The real issue was the 24 turnovers. Or the fact that they took 18 (eighteen!) fewer shots than the Jazz. Or you could say, "Kobe went 3-20, of course they lost." Or you could see that 17 of those 24 turnovers came from their big 3.

All in all, it's a bounce-back game for the Lakers, while the Rockets are still trying to get to 100% health-wise and figure out what kind of team they want to be down the stretch.

These guys will probably split time at the point. Sessions has always been a decent point guard, and Blake can beat you with the three. But I like Dragic here, and hopefully the day off gave him a chance to rest.

Interesting decision here for the Rockets. If K-Mart was playing, there would be no question that Parsons would guard Kobe and K-Mart would pretend to play defense elsewhere. But with Lee and Parsons, the Rockets can actually give Bryant a couple of different looks on defense.

It kind of reminds me of when we had Battier and Artest and we could play defense in a variety of ways against stars.

Quick note about Bryant: my dad doesn't watch much basketball. He's a bandwagon Rockets fan (and he admits as much), but he knows guys like Kobe and LeBron. It's always hilarious when he's watching some game and he'll say, "Armin, have you seen this Rose guy on the Bulls? He's really good!" Anyway, he hates the Lakers more than any other team (though it's close with the Jazz), but even he respects Kobe. Dude can still ball. 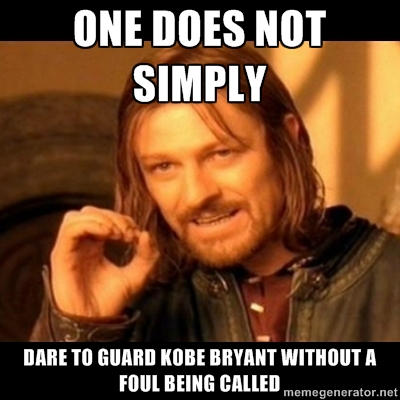 We've gone over this. I refuse to call him by his other name. And Matt Barnes will play here a lot too. Probably more minutes than Artest.

I expect Parsons to feel better today. Hitting the rookie wall is always expected, but getting sick just sucks. And hopefully it doesn't force him into said wall.

I feel like these guys were in some kind of story together in the offseason. Hmm...oh yeah it was that trade that David Stern vet-

Wait, there's someone knocking on my door.

"Oh hi Mr. Stern! I was just talking about you. Whoa, what's the device in your hand? Get back! Stay away!!!"

Where was I? Oh yes, David Stern is the greatest commissioner in the history of the NBA. In fact, he should run for president. Everything he's ever done has been fantastic.

No, I was not brainwashed. Why do you ask?

Well, it looks like the Lakers have made their decision about who they want to build around. It's Bynum. And the best way to keep building is by trading away their last big piece (Gasol) for other young pieces for the future. That's why they were adamant about Lowry when we resumed discussions with them.

It's the right decision. When he's healthy, Bynum can be a top 10 player in the NBA.