Share All sharing options for: Rockets Face Jazz With Playoff Push In Mind

They couldn't just fade away. New coach, new system, a baby-face starting at small forward, and Devin FREAKIN' Harris is their leading scorer recently. They shouldn't be hanging around.

And of course the Spurs didn't take their Big Three on the road to face them. Hey Spurs, remember last year when you did that against the Grizzlies? And that helped the Grizz clinch the 8 seed? How did that turn out for you? Yeah, I thought so.

The Jazz are still 1.5 games out of the eighth spot, and with Dallas faltering they have to be foaming at the mouth. They have to hope that the Rockets sweep their home-and-home with the Nuggets. Part of me hopes we don't send anyone but Courtney Fortson to Denver for that game.

Thus starts yet another important homestand for the Rockets. Utah tonight then Phoenix Friday. Winning both games could wrap this sucker up for the good guys. The team that goes better than .500 out of the three teams will get a huge momentum boost. Meaning, going 1-1 is okay for the Rockets, but it will give hope to the team that beats them. Going 0-2 would be a disaster, as it would further muddy the already turbid waters of the Western Conference playoff race.

Other games in the NBA tonight that matter to the Rockets:

Kevin McHale on Dragic (via Friedman):

Goran had what I've grown to expect out of him over the last five or six weeks. He goes out there and gets 22 and 7, and you go ‘Solid game, Goran.' You know you're playing good when you do that.

Before you go, "Favors isn't a small forward! You're an idiot. TRADE AK WITH K-MART!!!" let me explain myself.

Normally C.J. Miles starts at small forward, but he's probably out. So DeMarre Carroll starts. But he won't play much. In fact, against the Spurs, he played 11 minutes despite starting. Favors played 31 minutes, meaning I had to put him in here. I guess Millsap slides down to the three when the three bigs play together, but the Rockets can actually counter this if it happens with Patterson, Dalembert, and Camby playing together.

Oh dear. Millsap is going to have a field day as Scola does his Argentine Tango on defense. I want to expect Patterson to play a lot tonight, but with McHale I never know. It's not much use trying to figure him out.

This matchup is big. If the Rockets 4s can neutralize Millsap that would be a big plus for the Cardiac Kids.

Really Old Anthony Davis gives the Rockets a ROAD that Cormac McCarthy would be proud of.

This is such an important matchup that I can't overstate its importance, but I'll try.

Jazz: C.J. Miles out, Earl Watson out, Josh Howard out 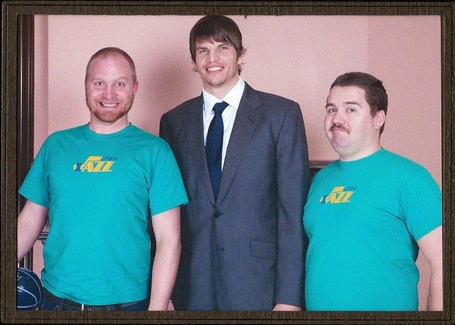