Share All sharing options for: Report: Rockets Trade Dalembert To Milwaukee For No. 12 Pick, Three Bucks

The Houston Rockets can't stop dealing, and they won't stop dealing. They now hold hostage the 12, 16 and 18 picks in this year's draft. Don't believe me? Hear it from Woj:

Shaun Livingston also goes to the Rockets as part of the package, sources tell Y!

2) We got two Jon Brockmans. YOU HEARD ME. TWO JON BROCKMANS.

4) All four of these guys have expiring contracts. The more liquid, the better, I suppose.

5) The Rockets no longer have a center on the roster.

You have to wonder if moving up two picks was worth trading Dalembert. Maybe Houston could have gotten more, but Morey is just in a ridiculous zone right now. I like the urgency, I like the "this is it" mentality that keeps hovering over these moves. I'm a fan for now, if only because I know this is certainly not the end of this.

Let me add this. The best part about these trades: since this is Daryl Morey, you know there is more to come from this trade. If this was David Kahn, well, this would be it and you'd hate your life.

Update (3:05 PM): Does this hurt chances for Howard trade? 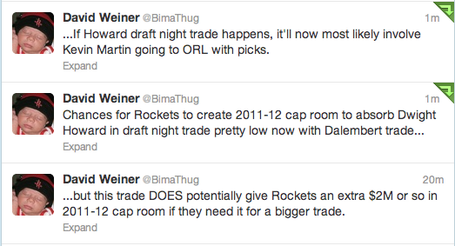 A Note From TDS: If you're mentioning something you "hear" or "read" relating to the Rockets and/or the Draft, please cite the source with a link. It makes everything much easier to follow. Thanks.