The Possibility of a Dwightmare-Linsanity Duo in Houston

Share All sharing options for: The Possibility of a Dwightmare-Linsanity Duo in Houston

By now, the Dwightmare has probably gotten to be too much even for the most interested fan of the drama. So, the news that Jeremy Lin just might end up having a reunion with the Rockets was a welcome distraction. Every time it appears like a deal for Dwight Howard to the Rockets just might be imminent, something like this pops up:

The Lakers, Magic and Cavaliers have discussed a three-team deal that would send Dwight Howard to Los Angeles, according to sources.

Which, of course, got a mixed reaction from Rockets fans. The ones who are adamant upon a rebuild scenario with just our kids having room and time to grow, were ecstatic. Others, who have come around on the Dwight vision with the realization that keeping him long-term might be a better chance than most realize, well they were crushed.

Of course this trade scenario with the Lakers and Cavs, cutting Houston out of the deal, was disputed by many others, including the Cavs very own beat writer

Nothing to these trade rumors involving #Cavs, Lakers and Magic, league source confirms. No merit to them at all.

Which was confirmed by other sources close to the Cleveland franchise who said that they've walked away from the deal. But this was the tweet that got Red Nation in a bit of a tizzy last night:

Cannot say I saw that one coming. More thoughts after the jump.

So, what about the possibilities of a Dwight Howard and Jeremy Lin 1-2 punch for the Rockets? Seems vaguely familiar...a superstar wanting out of Orlando, paired up with an Asian sensation in Houston. But could it really happen? 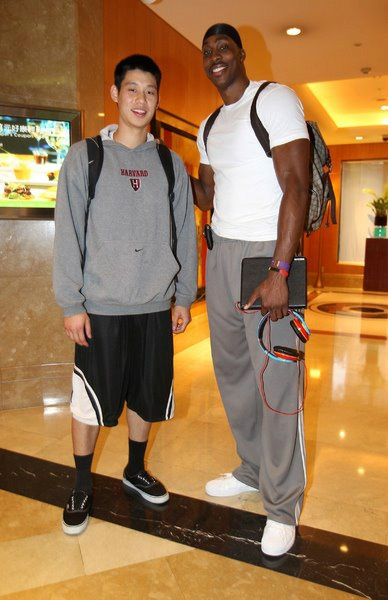 It seems past stupid for the Knicks to match the offer on Lin that would absolutely cripple their cap in year three. Plus, it would give them their third point guard who actually was a starter on a team last season. Jason Kidd has said he was fine playing a mentor role to Lin and being the backup point. But I doubt he signed on to ride the bench in his final years as the third point guard.

However, the Knicks haven't always been the paramount of fiscal responsibility. They've overpaid, overpaid again and then overpaid players just to go away. And with some members of the Knicks brass stating just over a week ago that they would match any offer on Lin "up to a billion dollars," it's really hard to think they made the decision to let that marketing fortune just walk to another team.

Still, there are several sources stating that Lin will not be matched by the Knicks, and it is funny the contrast of reactions between the two bases. Rockets fans are kind of "meh" about it and say that they would of rather kept Dragic for that kind of money. Whereas Knicks Nation is absolutely melting down at the thought of losing him, not to mention the national media. ESPN is outright distraught at the mere mention that another NBA team didn't bend over backwards to cater to the Knicks. Whatever.

But if it does happen, how does this effect the pursuit of Dwight Howard? Well, the offer sheet with Bulls free agent center Omer Asik still has to get resolved. So what happens if the Rockets get the unexpected and both Lin and Asik go unmatched? They're screwed, right? Not so fast, my friend.

And would it all fit financially?

For those asking: After amnesty of Scola, now cap-plentiful Rockets can likely afford to add both Lin & Asik AND still make a Howard trade.

On paper, it all makes sense. But if I was a betting man, I'm sticking with the theory that Kidd is 39, Lin is unproven over a full season and Felton is just insurance. It's a rich move, but it just seems odd that the Knicks would sour on Lin that quickly, knowing what he means to them at the gate.

As for the Dwightmare, I'm staying on record that I think this one happens as soon as the offer sheet madness is over. Magin GM Rob Hennigan is playing poker and Daryl Morey keeps calling his bluff. All the experts agree that Houston has exactly what the Magic need; a big expiring contract (Martin), youth, draft picks and the ability to take back a bad contract or two. With the suitors drying up, Daryl Morey is just sitting back and not bidding against himself.

The problem for Hennigan is that he is using what the Nuggets got for Carmelo Anthony as the blueprint for what he wants in return for Howard. But what he's going to realize is that Denver got that deal because Melo was willing to agree to an extension. As long as Howard refuses to commit long term, you aren't going to get the king's ransom that you desire in return. This is why I think the Rockets get the deal done and it will be for MUCH less than ESPN foolishly reported early Friday morning.

However, we're at a stand still until the offer sheet commitments are tended to. If Lin is a member of the Rockets late Tuesday night, then it might be time to get excited. Because the prospect of playing with Jeremy Lin is likely to pique the interest of one Dwight Howard. You guys might not think it, but Lin has star power that Goran Dragic nor Kyle Lowry never had. And even if it kills your CP3/Dwight dreams in 2013, remember that Lin could always go to Los Angeles in a sign and trade.

The possibilities right now are endless. I'm waiting before I get excited, but to say my interest is waning would be quite a stretch.