At Long Last, Is The Red Nation Rebuild Finally Upon Us?

Share All sharing options for: At Long Last, Is The Red Nation Rebuild Finally Upon Us? 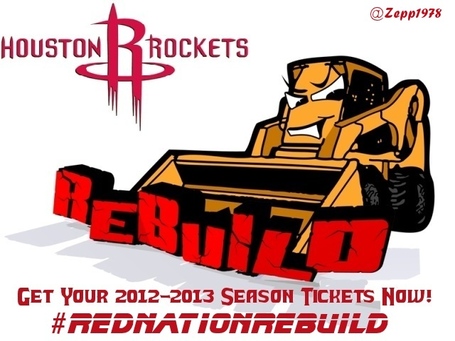 Since game 3 of the 2009 Western Conference Semi-finals (you know that one where Yao Ming was declared done for the season...again?), some of us have been clamoring for the Rockets to blow it up and start to rebuild this team in the proper fashion.

The proper fashion, as I so eloquently say, is to have a good ol' fashioned firesale. Sell off all your top talent for cash, cap relief and future draft selections. Well, finally, three years later, the team finally appears to be headed in that direction.

By trading Chase Budinger and Samuel Dalembert, it became well known that Houston was making an all out final assault at landing a superstar in Dwight Howard. But when that fell apart and Houston had to stick with their 3 first round selections in this year's draft, once the whining died down, most agreed that they had a pretty solid draft.

With what transpired today, in the Rockets losing both of their point guards from a season ago, one in free agency and the other for a future draft pick, it appears that Les Alexander has seen the light and is ready to give Daryl Morey the green light for a full on rebuild. We'll take a look at what else might be headed our way after the jump.

First off, a rebuild is never something easy for casual fans to accept. They see all these other teams spending big money and creating super teams and they say "why the hell can't we do that?! Fire Daryl Morey!" But if you really believe that our general manager hasn't been busting his ass to make a big splash, then your hatred for him is already too deep to change your opinion, most likely.

But a full rebuild is something completely necessary if you aren't able to lure a star player here to build around. So all of those people crying about losing Dragic and Courtney Lee, remember that you are the same ones saying that you were tired of dwindling in mediocrity. You have to get worse to get better, and when you're in a league that now seems to be driven by the players, the only way Houston is ever going to get that big building block is through the draft.

Ralph Sampson, Hakeem Olajuwon, Yao Ming; what do they all have in common? True, they are big time legends for the Rockets organization. But what else do they have in common? They didn't come here via trade or free agency. They got here through the draft. So quit deluding yourself that Houston is some great destination city that players are attracted to. It just isn't true. I don't care how many players live here in the offseason. Houston just isn't a sexy town, and that is something that matters a ton to players in this league today. That is why you never see Houston on any of these "lists" that players put out there now.

Well, as I'm writing this, Jason Friedman of Rockets.com tweeted that the goal of the team is still to get that franchise player in place. But I really don't see what else they could do. Who wants our leftover garbage for a star player? Maybe Orlando? I really don't see how nor do I think that's the way they're going to go.

In the next few days, I fully expect to see Luis Scola and Kevin Martin moved in similar types of deals that we saw Kyle Lowry go in today. Future considerations with a player thrown in for our "troubles" and to make the money work. Then I think we will see easily attainable stop gap players brought in, like the rumored Aaron Brooks reunion, just to fill out the roster for a year or two while the rebuild is going on.

I still fully expect the Bulls to match on Omer Asik, as his deal may be heavily backloaded, but it's basically MLE money for two years while they try to figure out their cap problems before that huge third year kicks in. It isn't like many Rockets fans were enamored with Asik anyways. I'd of loved to have had him here, even for a rebuild, but whatever.

The Jeremy Lin stuff is just noise, in my opinion. I thought it was just calling Goran Dragic's bluff, but apparently their visit in Houston didn't go as friendly as many believed, as he took similar money to go back to the team that already traded him once as a throw in. Look at the Knicks cap situation the past decade; do you really think they make smart decisions? They'll match any money or poison pill contract Houston throws at Jeremy Lin, thankfully.

No, don't expect to see too much success at Toyota Center next year or even the year after that. But it is always fun to get a chance to see the kids play. Personally, I'm excited to see if Royce White can be as good as everyone seems to think he can be. I'm curious to see if Jeremy Lamb can actually make an attempt to play some defense, unlike his predecessor. I am very curious to see if Marcus Morris has anything or if Terrence Jones will steal his lunch. And lastly, will Donatas Motiejunas be the next Dirk, or just another seven foot tall stiff who will be back in Europe within two years.

I know these aren't exactly the things that make must-watch TV happen. But at least there seems to be a plan in place now, unlike the "Rebuild without tanking" scenario the team has employed the past three years.

I've been accused of being a Daryl Morey apologist in the past, and I can understand why. But if Les has really given him the keys to do a rebuild the way he wants, then I think he's going to knock it out of the park. Most disagree, as evidenced about their complaining today that he didn't get get 15 unprotected first round picks for a disgruntled Kyle Lowry. But adjusting to a rebuild is never an easy thing for sports fans.

Think about it like this; a lot of suffering now is good for our future, and a hell of a lot less stressful than picking 14th every damn year.