Rotating Rockets: We Asked For Change, So Let's Deal With It

Share All sharing options for: Rotating Rockets: We Asked For Change, So Let's Deal With It

The saying goes "When the going gets tough, the tough get going." Nobody actually says that anymore, probably for two reasons: A) John Belushi put it to its optimal use in Animal House, and B) It signals a rough road ahead, and rarely does anybody want to acknowledge that.

If you're watching a movie or a TV show and a scriptwriter gets lazy and tries to sneak the phrase by you, that's usually when they cue the two-minute montage, just to move everything along through the tough stuff so we can all get to the point. You'll see a few humorous clips, you'll hear a song befitting the mood and then — for a brief ten-second spot — the tough will actually get going. Just for a few seconds, the characters will have to overcome some sort of struggle.

Sadly, we don't have the luxury of skipping past the rough spots in the NBA, and we can't pretend as if that luxury exists.

Rockets fans, we've entered the gauntlet. The going has gotten tough. We're in the dark about our future as much as any fan base has ever been. We're absolutely clueless as to what's going to happen next. At the very least, come opening night, the Rockets' roster will have completely turned over and we're going to see new faces everywhere.

Of course, that's assuming they can find or reach everyone in order to let them know they've made the roster. Look at this laundry list of options. It's more like a grade school class roster. I had to zoom out twice just to fit everyone's name into one screen shot: 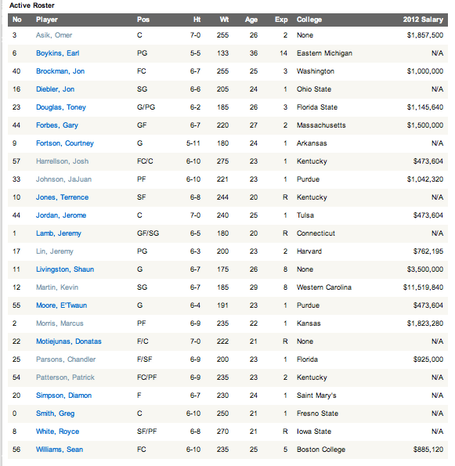 Poor Diamon Simpson. He's gone from the 13th man on the roster to the 24th man. That's a usable term now, apparently: the twenty-fourth man. The Rockets could field two full teams right now if they wanted. Maybe that's part of the plan. And yes, there is a plan.

Point is, there is no point in trying to rush to the point. Slow down, everyone. Suddenly, there's all of this panic everywhere and the Rockets haven't even played a regular season game yet.

About all these changes being made? There's no montage button to hit. We have to ride it out, stick with it, get through it. We all wanted off the treadmill, we all wanted change. Well, here we are. Here is the change. I know it's not the type of change every fan yearns for, but for the moment, we have to appreciate change alone and understand that it could be worse. We could have nothing to show for our mini-firesale. Instead, we have some exciting, untested youth and valuable draft picks.

You've heard it before, but I'll say it again: If every team in the NBA could conventionally go from run-of-the-mill to championship caliber in a day, this league couldn't exist.

Go ahead and mock Jeremy Lin's stardom and marketability or Omer Asik's contract and minute count if you want — there's no point in stopping you, Jerome Solomon. That's the nature of the gauntlet: It sucks and we all get tired of it pretty quickly, so we resort to looking for ways to redefine the situation that usually leave the realm of logic. But there is only one realistic way of looking at what the Rockets are doing: It's change for the better and it's change because we all needed it. You may find a way to stray from that position, but ask yourself what you wanted the day the Rockets barely missed the playoffs for a third straight year. You know you wanted something different. Well, here's different for you.

The going has gotten tough, sure, but luckily, we're just the spectators. We get to ignore the behind-the-scenes crapshoot that goes on every day as Daryl Morey and Co. attempt to work this thing out. Instead, we can just watch. And what fun we should have watching this team, whatever it turns out to be come opening night. Athleticism? Check. Name recognition? Check. Height? Finally. Personality? Absolutely.

Put the ultimatums on hold for now, critics, and accept the reality. This is the tough period, this is the turnover. Misguided cynicism won't make it any easier.