Rockets Film Study: Don't watch the man with the ball

The Rockets offense has made a living on off-ball movement as of late. Let's take a closer look at how they've done it!

Share All sharing options for: Rockets Film Study: Don't watch the man with the ball

There's a reason @MattMooreCBS gets paid the big bucks or whatever they pay him at CBSsports. He notices the details that we casual guys don't, and thanks to him, I'm writing this film session for you TDS readers.

We all know the Rockets can score; in fact, they score better than anyone else in the league at 106.8 points per game. If you watch the Rockets enough, you also know where most of those points come from: a healthy dose of transition points, of pick and roll featuring James Harden and co-star Jeremy Lin and the boys(that can dribble), and an unconscious amount of 3 point shots created by the system.

Matt Moore called the Houston's off-ball movement awesome Monday on his baseline awards and I thought, "Really? I never noticed that." Sure enough, after re-watching the good portion of Tuesday night's coffin nailing on the dying Lakers, I also gained a new appreciation for the Rockets' off-ball movement.

I give Harden and Lin a ton of credit for their ability to generate points and chances off the pick and roll, but I really do not give the other guys enough credit for moving and generating scoring opportunities for themselves and their teammates. It actually is a thing of beauty to watch when it's done right, and the Rockets are actually doing it rather well to add complexity to what was once a simple offense. It's probably yet another reason why our scoring has taken such a significant jump.

These are some clips from last night's Laker game, and I am going to attempt to show you how the Rockets used their off-ball movement to keep themselves in the game and step on the Lakers' throats in the 4th.

The great thing about these pictures is that some of the earlier principles I talked about in my other film session posts also get reinforced, like early offense. Most of the plays I dissect from this game come from initiating the offense early. The often crosses the court with 19 sec left on the shot clock, which leave ample time to set up plays and reset if necessary. 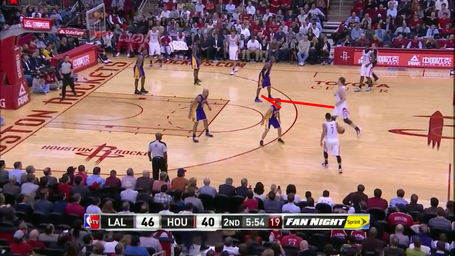 This ends up being broken because Steve Nash decides to show Omer Asik what a stiff arm to the face feels like, and the ref just watches it happen. 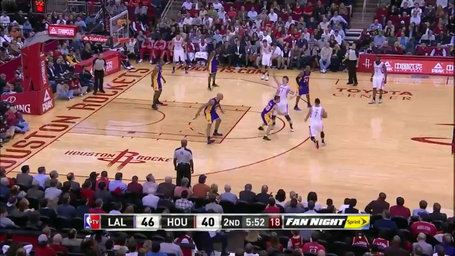 By the time Asik re-establishes his pick, the spacing is broken and Jeremy has picked up his dribble. Like we often do in broken plays, Jeremy looks to Harden. 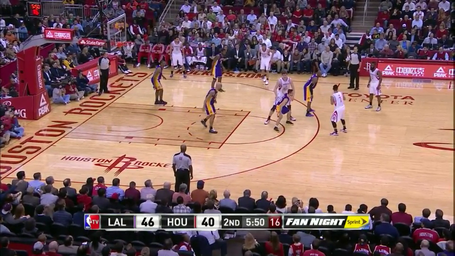 As Lin backs away to the left side wing, the play has now become a Harden pick and roll. Chandler Parsons realizes that the center of the paint is completely empty because of the earlier mishap and the defenders are all on the right side. He makes a cut into the lane right before James Harden makes his move. 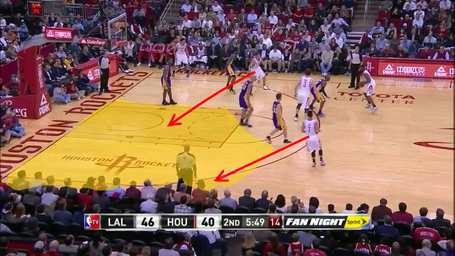 Here Chandler is in the gooey center of the Laker defense looking for a pass. James Harden demands so much attention that all the defenders are looking at him and not their men, so Parsons has an easy lay up. James misses him, so he continues to cut to the side of the basket. At the same time Asik is trailing the play, rolling and being the security blanket in case Harden misses, and Jeremy drifts his way back to the top for a possible open 3 if Harden is cut off. 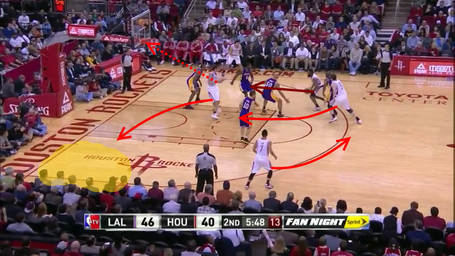 As Harden gets smothered by all the Laker defenders, look at how wide open Parsons, Lin, and Asik all are. James passes up risky passes to Asik and Parsons, and opts for Jeremy Lin, as Lin he moves closer to Harden to give him a clean passing lane. Parsons sees the pass and immediately floats back to the corner, but he can also cut toward the basket. 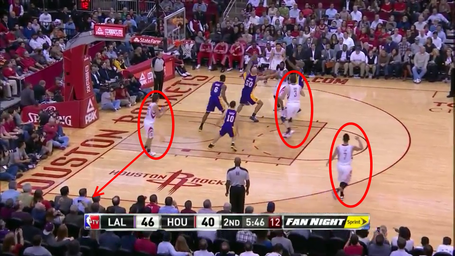 Jeremy has a wide open 3 here, but he swings it to the other open 3 point shooter Chandler Parsons. Unfortunately, the only Laker that's interested in closing out runs at him, and Earl Clark has Orangutan arms. 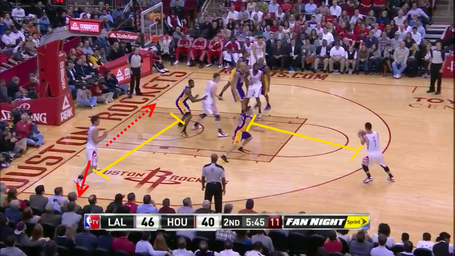 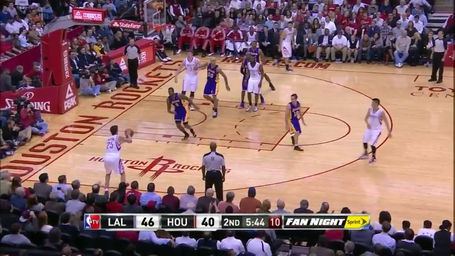 Parsons pump fakes him out of the way and banks in a 2. 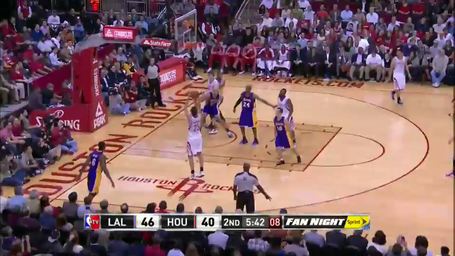 The final shot is not a direct result of off-ball movement, but all the side to side ball movement is a product of the off ball movement and accurate assessment of the floor space, which creates multiple good options along the way.

Here's a simple one that's just 2 simple movements that lead to a sensational play.

Toney Douglas has the ball and Chandler Parsons comes and set a pick for him. Unlike big men who roll directly toward the hoop, Parsons rolls to that big empty area unoccupied by Lakers. 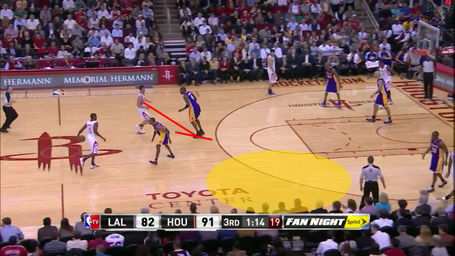 Antawn Jamison completely messes up the pick and roll coverage and leaves Parsons ridiculous open, seriously, look at that open space. Chris Duhon and Antawn Jamison are like "crap!" Parsons can probably drive to the hoop for a Sacre foul here, but he won't. 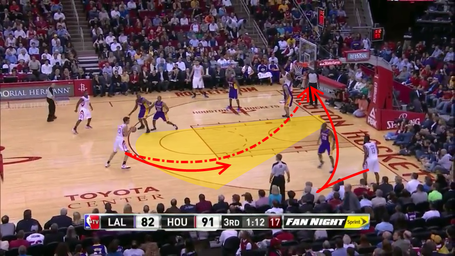 James Harden does something incredibly brilliant here by first showing for a pass and then getting Meeks to commit on defense. Notice Duhon and Jamison are both chasing Parsons trying to recover for their mistakes, which also leaves Toney wide open. 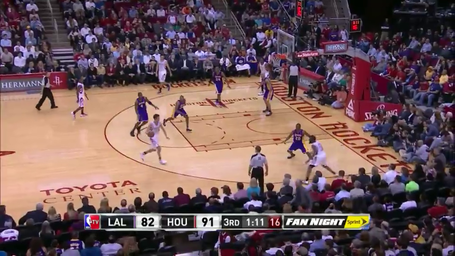 He then makes a hard cut to the hoop. Watch now as Delfino also has moved up and away from Kobe's vigilance, so even if Harden ends up trapped (unlikely), he still has 2 wide open 3 point options. 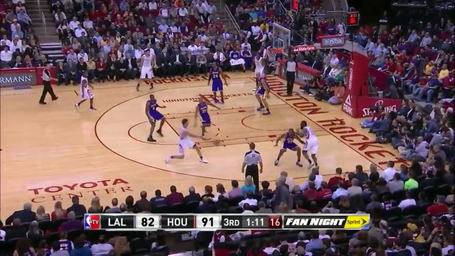 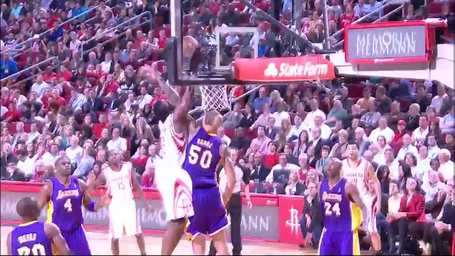 Here's the Pièce de résistance of the night. The Lakers make up a little ground on the Rockets' lead, cutting the lead to 8 points in the 4th quarter. Toney Douglas brings the ball across at 19 second mark. The initial set has Lin and Delfino already positioned at opposite corners for a 1-2-2 set, with Patterson and Parsons strolling in to fill out the set. Instead of running a pick and roll for Toney, we set a double screen to spring Jeremy Lin. 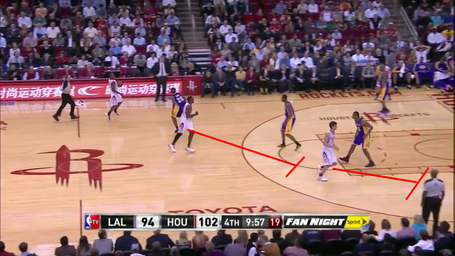 Screen 1, Chandler Parsons. Jeremy leaves the right side corner where he's been rather abysmal shooting 3s, which leaves a void in the floor space for someone to fill in. 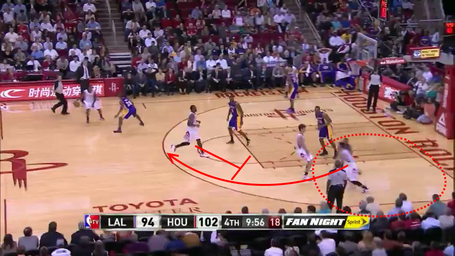 Screen 2, Pat the Man. This runs Lin's defender through 2 screens already. Parsons will continue his way to the other side of the floor to set a back screen for Carlos Delfino who comes across to fill the void that Jeremy just left. At the same time Patterson continues his way down the block to set another screen that allows Delfino to curl up to the right side wing. 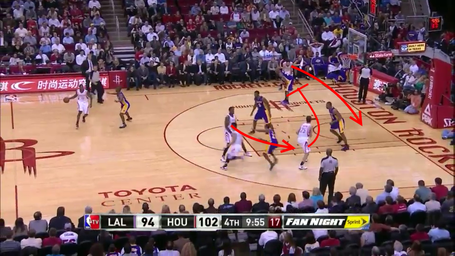 Chandler's screen leaves Kobe way out of the play. 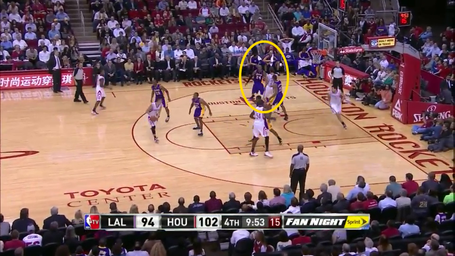 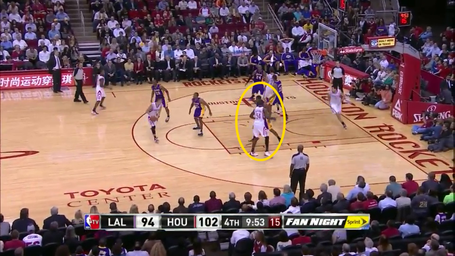 Patterson's screen impedes Earl Clark, who in turn impedes a chasing Kobe. This forces Earl Clark to switch to close out, but at this point the ball is already in Delfino's hands. Look at how now Patterson has a massive post advantage and rebounding advantage on Kobe Bryant. If he posted here or boxes Kobe out, I'd die happy.

Parsons is now at the left corner, and Douglas also has shifted to the left side wing. The strong side/weak side has completely reversed and Jeremy Lin is at the top of the 3 point arc where he can initiate another play or take a straightaway 3 if the ball comes to him. The defenders have completely shrunk to the center of the court because of the flurry of screens and movement. The Rockets' set ends up turning into a 3-2 set with everyone basically taking a rotation in the space they occupy. 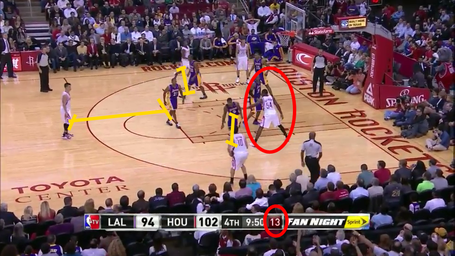 Yeah, Delfino drains this. He has no conscience. How Kobe gets inside position for the possible rebound is a mystery to me, and frustrates me to no end. 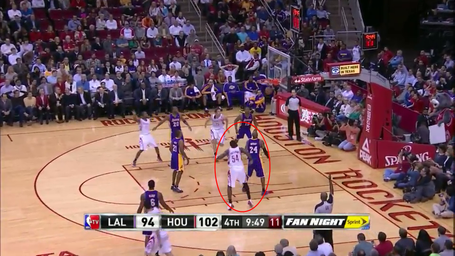 He makes a face. 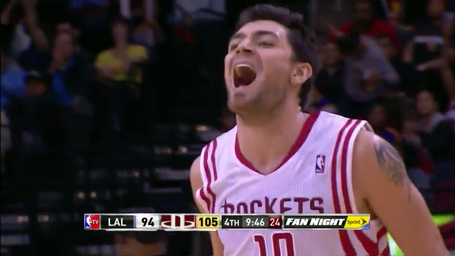 Even Greg Smith celebrates 3s on the bench. Well, this is not from the same play, but I just find it hilariously awesome that Greg Smith has a 3 point celebration. 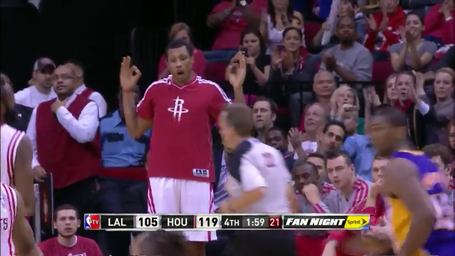 Rockets run a very simple offense. In fact, the majority of our possessions are still just spread pick and rolls or isolations initiated by Lin or Harden, but that does not mean there are no built-in sophistication. The Rockets have high IQ players despite their relative young age, and they have a good feel for the game. Not everyone can be the Spurs who play fast and precise, but, little by little, nuisances and wrinkles are starting to show in Rockets' offense to make them more dangerous. I do hope everyone enjoys these film studies. I will be doing them with some regularity for the Dream Shake. Will I always steal ideas from Matt Moore? Probably. Thank you for reading.