durvasa from ClutchFans mapped it out:: 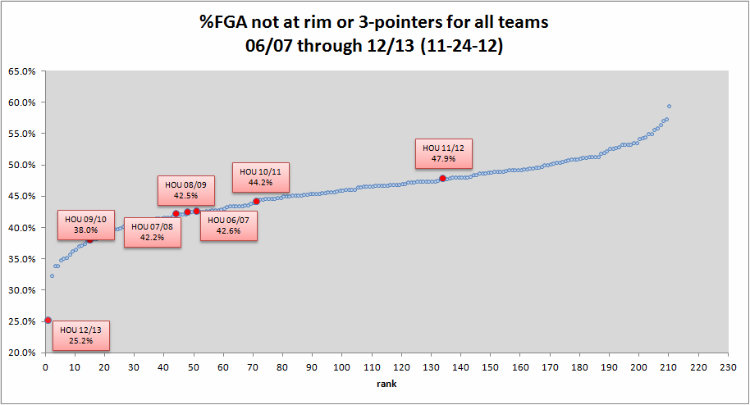 You should check out their post actually, it's a great discussion.

The reasons for hating the long 2 are varied, but the basic one is that the FG% of a long 2 is about the same as a 3pt shot, but you get more points for the 3pt. Living in the paint also has additional benefits of drawing fouls, which are not only the highest % shot in the game, but puts fouls onto the other team and increases the chance of benching their players due to foul trouble. Also the long 2 sucks for your team's rebounding.

Hoopsspeak posted about how Houston's shot selection helps out its offense.

For kicks, I ran the numbers for if Houston's shot distribution with league average FG%; at that time, Houston would be 6th in the league.

Perhaps interestingly enough, Lin and Harden both seem to avoid assisting the long 2 as well; with Lin it might be a carryover from D'Antoni, who hates the long 2. Harden appears to have modified his assist spread based on Houston's offensive philosophy.

I ran the numbers again today to see if there'd been much change, and the assist spread remained the same to about 0.02 to 0.01.

And decided to compare with everyone on the first page of ESPN's assist leaders. 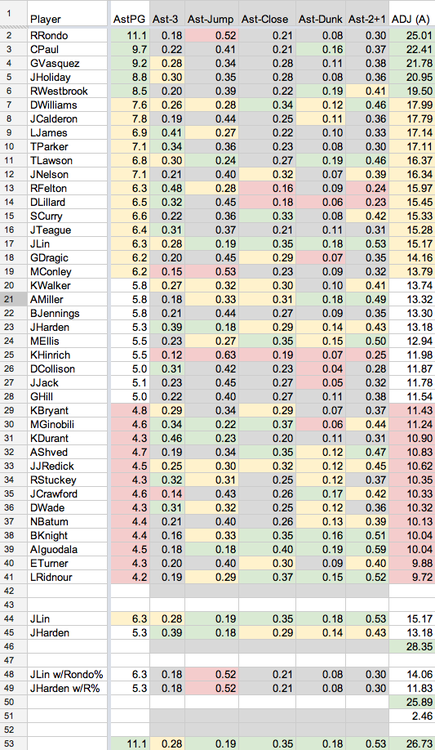 Note: I tested Rockets Team numbers (FTA/FGA and FT%) compared against Celtics Team numbers, but the difference produced was in the 0.001's, so I just used the Rockets numbers for everyone.

It produces a number that closely correlates with flat assist #'s (especially since passing to a player that attempts a close/dunk shot but only draws foul instead of and1, so there's not as much 'surprise' variance. I'd need a bit of brain/time to figure out how to reverse engineer shot% close+dunk#'s and FTA to guesstimate how many of the team's free throw points can be credited to an assist that doesn't get counted).

For more shits and giggles I plopped in PPG and added the Assist Points. (Result: God bless Harden.) 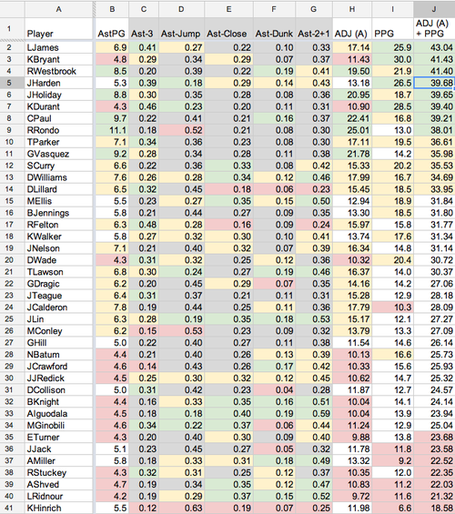 I expect once this team gets better chemistry (and Asik develops better handles/finishing) that Harden should squeak by Westbrook, at least. Meanwhile Lin needs to work on his shot, but we all knew this.

...and Calderon is by far pulling his weight more via assists than points. Ditto Rondo, and Vasquez but it's more obvious sorting by PPG... 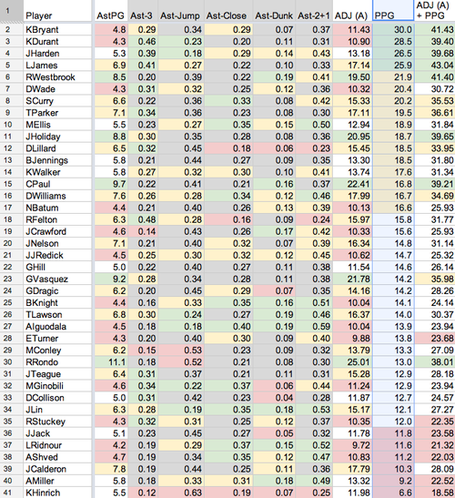 ...I got sidetracked by pretty tables, so sue me.

TLDR; Houston's currently being helped out by it's shot selection because its personnel has shitty FG% all across the board, compared to the league. Do not blame the lack of midrange jumpshots; if the team was taking long 2's, it'd make them worse.