Film Study: How the Houston Rockets are freeing up Carlos Delfino from deep

Carlos Delfino has been killing teams from behind the arc this season. How is he getting it done?

Share All sharing options for: Film Study: How the Houston Rockets are freeing up Carlos Delfino from deep

When the Rockets signed Carlos Delfino to a two year deal this summer, the move was met with a collective "meh" from Rockets fans. He was viewed as nothing more than a hired gun that would likely be moved at the trade deadline, merely an insurance policy for the Rockets in the post-Kevin Martin world.

As we stand now, he's still a hired gun. He's still likely to be moved at some point during his contract. But he is anything but an insurance policy for the Rockets. On a team that shoots the second most three pointers in the NBA, Delfino has found a tremendous niche as a shooter off the bench, averaging 11 point per game on 40% shooting from behind the three point line, taking over 6 three pointers per contest.

Delfino has always been a talented volume shooter, but this season he has career highs in his percentage from both the field and behind the arc, while taking the most three pointers of his career. How are the Rockets able to get him free for so many three pointers? Let's go to the tape to find out.

In this first play, the Rockets are set up in their half-court offense against Charlotte, late in a game they should win but are inexplicably losing. 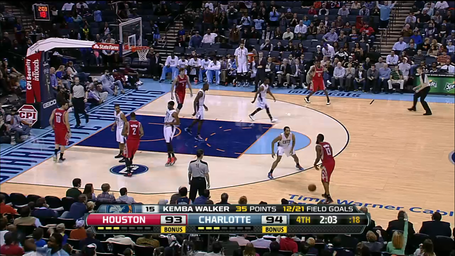 Marcus Morris is in position to set a down screen on Ramon Sessions to free up Delfino (left side of the screen), but Delfino waves him off and opts to go to the far corner. 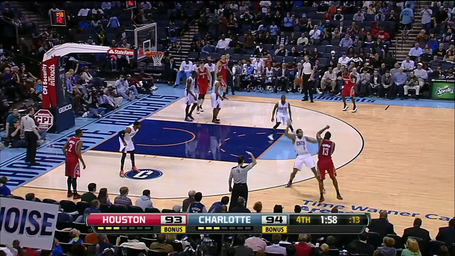 Delfino has now migrated to the far corner of the court, right behind Asik. Delfino's man, Ramon Sessions is in good help position but is caught watching the ball a bit too much. Here, Harden throws a pretty ridiculous pass that seems headed for a turnover but hits Delfino perfectly (you can see the ball mid-flight in this frame). 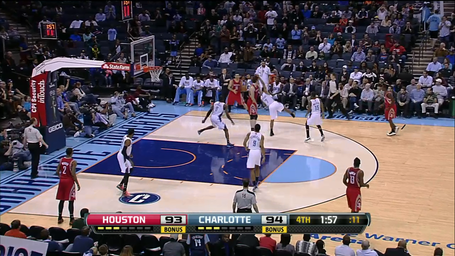 With Delfino having corralled the pass, Sessions tries to recover to close out on him, but Asik, having seen the pass mid-flight, has set a bruising (and legal) pick on Sessions. The small point guard cannot get around the wall that is Asik, and the amount of space that Delfino has to take the shot makes it a near impossibility that he'd miss. 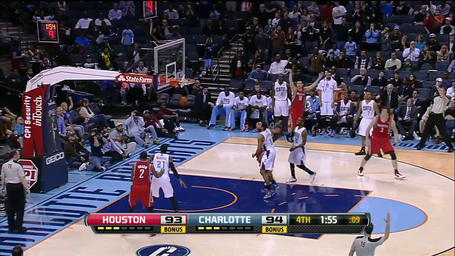 Splash. Delfino does a dance and the Rockets take a lead they would not relinquish.

Obviously, Delfino did well to corral a tough pass and hit the three pointer, but this play would not have been possible without the tremendous pass and screen combination from Harden and Asik. When the Rockets' bigs are screening well, the three point game is difficult to stop.

In this next play, we see another set where a screen sets up Delfino for an easy three. 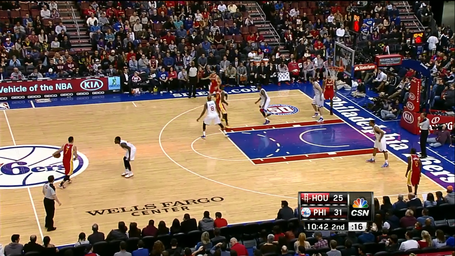 In this play, Delfino has come from the far corner with his man (Dorell Wright) trailing him. Patrick Patterson gets in position to set a down screen on Wright, blocking Wright's path to close out on Delfino. 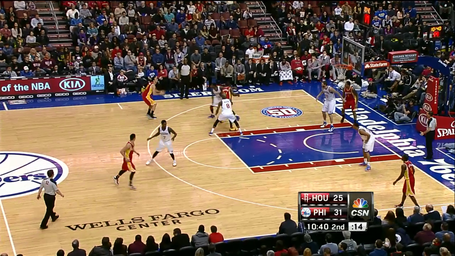 A small mistake by Damien Wilkins to stay on Patterson and not rotate out onto Delfino gives him a wide open three pointer. Delfino swishes it.

In that scenario, the Rockets run an exceedingly simple play, but a big screen and well-timed pass give the Rockets the look they want, and Delfino takes advantage.

Finally, we see another way the Rockets free Delfino for three, getting him the ball in transition. 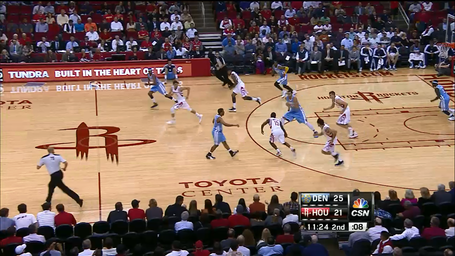 Off a Toney Douglas steal, all five Rockets immediately turn and run up the court. Delfino is pictured on the bottom of the screen. 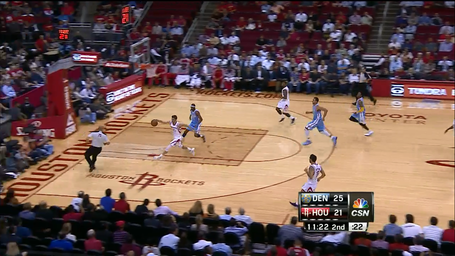 Chandler Parsons is the first player down the court and he fills the lane well, but an errant Toney Douglas pass causes him to have to pass up the shot. Marcus Morris is filling the lane as well, drawing the defense towards him. 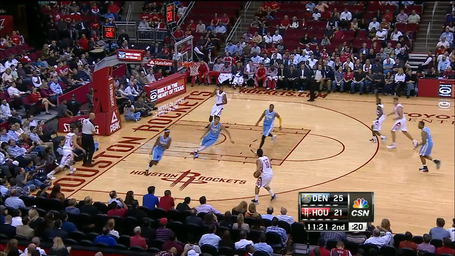 With Denver slower to get back, Delfino gets a wide-open three that he knocks down with ease. However, even if he didn't take the three pointer, he likely could have passed to Morris under the basket or Douglas behind the arc for two other open shots.

Carlos Delfino is 30 years old, and is in the midst of a career season. For a player to play his best years later in his career, he either has to be in incredible shape or in a system tailor-made for his strengths. In Houston, it's clear that Delfino has found a system where he can take advantage of his deep range and make it rain. I would have laughed at this suggestion before the season, but without Delfino, who knows where the Rockets would be right now?