In a word, tonight was absolutely FUN. Winning by nearly 50 against anybody is fun, but when it's against the Utah Jazz, it's multiplied by a factor of about 400 trillion. Behind a ridiculous team effort, the Rockets rested their starters the entire fourth quarter and rolled all over the Jazz, 125-80.

James Harden had his usual 25 points on 15 shots, Jeremy Lin didn't miss a thing, Chandler Parsons got hot, and Carlos Delfino tore apart the Jazz defense as the Rockets offense was humming all night. Per Basketball Reference's Play Index, the Rockets eclipsed the worst home loss the Jazz have suffered by 12 points, beating a record set in 1980.

Too bad they didn't have this guy! 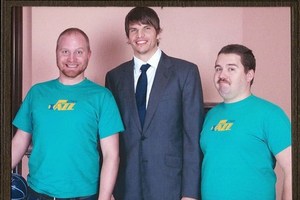 We're not going to say "the Rockets were so good and the Jazz were ridiculously bad" a million times in this recap, so we're going to go a bit deeper into a few aspects of the win (sorry, Jeremy Lin but you don't get a section tonight).

What more is there to add?

Asik Continues The Quest For 20

Four times this season, Omer Asik has grabbed 18 or more rebounds. Each time, he ran out of time to grab that 20th. Tonight, with 5:03 left in the third quarter, Asik grabbed his 19th board and seemed like he was on his way to finally reaching a new career high of 20.

However, with the Rockets up 29 with just over three minutes left in the third, Kevin McHale opted to pull his starting center, going with Greg Smith and others the rest of the way. Asik chuckled with the coaches as he left the game, but it's clear that he was bummed to have missed out.

Regardless of his inability to seal the deal on the 20 rebound game, it was Asik's second straight game where he absolutely dominated the paint. The Jazz bigs couldn't get anything done offensively against the big Turk, and his presence was a big reason why the Rockets way demolished the Jazz on the boards.

The Defense Was Awesome

It's obvious that the Rockets' offense was on top of it's game tonight, but looking past the ridiculous effort by the defensive unit would be a major oversight. The Jazz really missed Gordon Hayward and Mo Williams' playmaking, but the Rockets' ability to shut down the Jazz's talented bigs inside was perhaps the biggest factor in a massive home loss.

With the Jazz going with backups at the guard spots, the Rockets were content to double team the Jazz inside, and the rotations were quick and on-time. Despite the focus on the paint, the wings were out on the shooters like white on rice.

When it was all said and done, the Jazz shot just 38% from the field and 25% from the three point line. It was UGLY.

Editor's Note: This was a lot of fun to watch, but please don't go on SLC Dunk and troll Jazz fans. It makes us all look bad.