The Rockets have been killing it on the break all season. How have they done it?

When the Rockets declared this summer that they wanted to become a faster, more fast-breaking team, most tossed those words aside as nothing more than standard pre-season coachspeak. After all, we had heard the same spiel from the coaching staff each of the last three years with little to show for it.

However, this year, the Rockets have followed through on that promise, with both the frequency and efficiency of transition shots increasing this year. Adding a pair of dynamic guards in Jeremy Lin and James Harden certainly helped in that regard, but it is the bigs that are helping just as much by running the floor effectively.

By getting out as a team on the fast break, the Rockets are creating more mismatches and getting better shots than they have in the past. This isn't your momma's fast break with a wing leaking out to be hit with an outlet pass; rather, four or five Rockets all turn and run and beat the other team to the basket to set up quick open looks.

Let's see how it looks on the tape. 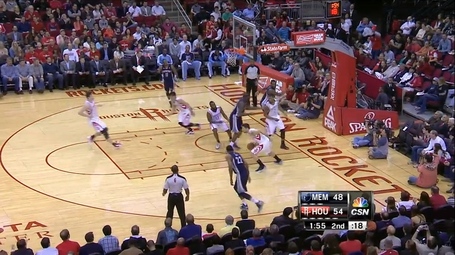 Against the Grizzlies, Marcus Morris gets the block and Carlos Delfino collects the loose ball. At this point, four Rockets turn and run up the floor. Two Grizzlies are behind the play staring at Marcus Morris. 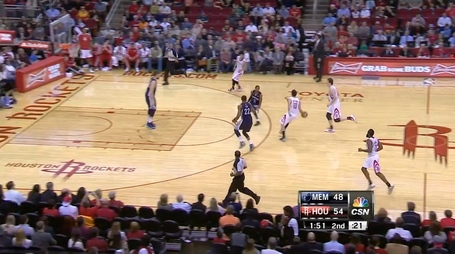 As Carlos Delfino reaches the top of the three point arc, the Rockets hustle has given them a four on three situation. 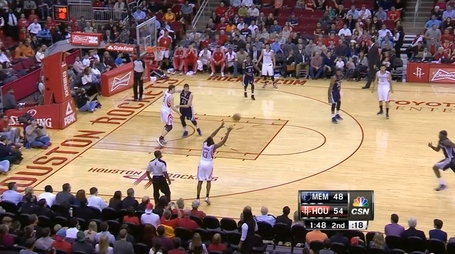 After a couple of passes, James Harden gets a wide open look for three that he predictably buries.

Key to this play was Omer Asik's running of the floor. Because Asik gets down the floor and occupies space in the lane, Gasol is forced to stay at home under the basket, conceding the open three pointer.

At the end of last season, this would be a play you would never expect to see. Typically, Marcus Camby would be well out of the picture at this point, waiting for the shot to go up and the Grizzlies to come back on offense. However, because of Asik's effort and youth, the Rockets got a mismatch and took advantage.

Against the Hawks, we see another situation where the Rockets' team effort gives them an easy transition score. 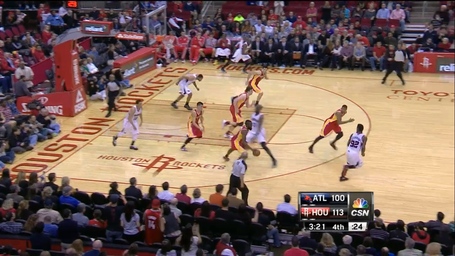 After a Jeremy Lin deflection, James Harden steals the ball and all five Rockets begin to race up the court. As you see in the next frame, it looks all too easy a few seconds later. 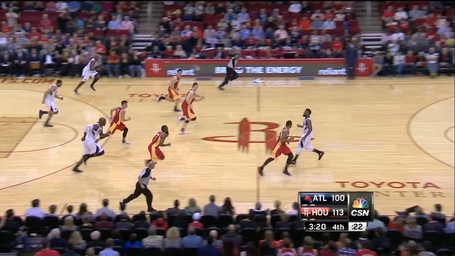 With DeShawn Stevenson the only player in a position to make a play, this break essentially becomes a five-on-one play. Given that the Rockets are not my middle school basketball team, they converted easily with Asik slamming it home. 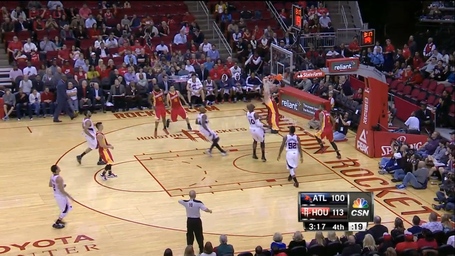 The freeze frames from the starts of other fast break opportunities have been eerily similar: 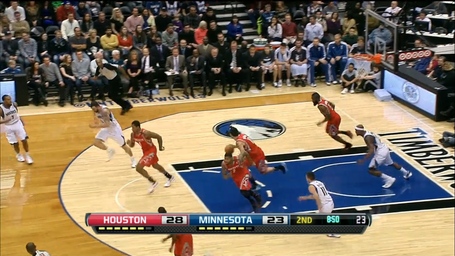 In the Minnesota game, all five Rockets take off immediately after the rebound. This play leads to a four-on-three break that the Rockets turn into a Marcus Morris and-one. 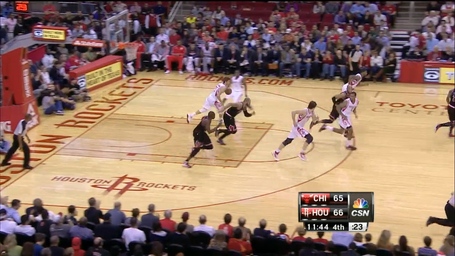 Here, after a Chandler Parsons rebound, all five Rockets sprint up the court. The three front court players for the Rockets (Asik, Smith, and Morris) beat their counterparts up the floor, and Chandler Parsons finds Omer Asik for the easy dunk.

With the youngest team in the NBA, the Rockets have to rely on their youth and athleticism to create mismatches on offense. From the tape and the data, we can clearly see that they've been pretty effective at doing so. As the season wears on and older legs break down, let's hope that they can continue and even add to this fast break attack.