I'll get the knee jerk reactions out of the way here: Kevin McHale hates Jeremy Lin, Dwight Howard is the second coming of Jesus Christ, James Harden for MVP.

Share All sharing options for: Rockets golden in Manila

The Houston Rockets made a sixteen hour trip to the capital of the Philippines to play their second preseason game of the 2013-2014 season. The Rockets bested the Indiana Pacers 116 to 96 in front of a crowd of NBA newcomers. Kevin McHale tinkered with the starting line up opting for Patrick Beverley as the starting point guard and Terrence Jones as the starting power forward. James Harden had a game high 21 points and was followed closely by the freshly inked Omri Casspi who logged a double double. The Pacers acquired Luis Scola this summer in a trade for Gerald Green, Miles Plumlee and a first round pick and returned a healthy Danny Granger to their roster. The Pacers look like they are going to have a good season. The Rockets look like they might have a great season.

Obligatory notice: this is preseason. If you're a basketball fan you should know that preseason games rarely provide valuable insights into how things are going to unfold during the regular season.

The NBA preseason is an ideal time for teams to experiment with new ideas. Kevin McHale did just that with a not-so-surprising starting line-up swap this morning. Jeremy Lin and Donatas Motiejunas were replaced by Patrick Beverley and Terrence Jones to begin the game. All four players had exceptional performances. The Rockets started the game with a 12 to zero run during which Terrance Jone's athleticism and Patrick Beverley's hustle both payed dividends. As a starter, Beverley continued to play like a spark off the bench and that mentality makes him more prone to turnovers and fouls than solid point guard play. Jones is an athletic force who can run the break and dribble (he's been doing this for almost a year now). His handle and speed allows for a, dare I say, Royce White-esque approach to getting the ball up the floor. Jones didn't score like he did during Houston's preseason debut but he did have seven rebounds and a big block. All things considered he's still making the strongest argument for the starting power forward position.

Jeremy Lin looked fantastic as the focal point of the offense on the second unit. It's a small sample size, but Lin could legitimately thrive in a James Harden in Oklahoma City type of role. A handful of very talented scorers have made a name for themselves as the first guard off the bench and Lin is the kind of guy who is going to do whatever it takes to make the team better. I can appreciate the argument for Lin coming off the bench, but I'm not sold on the idea yet. Lin is miles ahead of Patrick Beverley as a playmaker and scorer. Only time will tell if McHale is seriously considering starting Patrick Beverley during the regular season. At the end of the day lighting a fire under Lin's ass will only encourage him to succeed and as Shane Battier likes to remind us the cream always rises. Jeremy Lin is expected to start for the Rockets' next game in Taiwan.

Lithuanian big man Donatas Motiejunas had an underwhelming performance on Saturday against the New Orleans Pelicans. His line, 4 points, 6 rebounds, 3 assists, was not terrible but he was dwarfed by the performance of second year forward Terrence Jones. This morning DMo came off the bench and found his rhythm in the post finishing with 16 points. The shots that DMo missed on Saturday were falling this morning. One thing that has stood out in DMo's two preseason games has been his reluctance to execute at the three point line. Some fans had Motiejunas pegged as the stretch four whose game would best compliment Dwight Howard in the post. The more I see of DMo, the less I think that's the case.

Remember last season where almost every game started with an Omer Asik post up? McHale has the offense running through D12 and it's beautiful. The only person who could possibly be happier than Rockets fans with the way the offense is percolating is Dwight Howard himself. Roy Hibbert, who made Miami look flawed in the playoffs last season, was palpably mediocre when matched up against the three time DPOY Dwight Howard. Howard has also shown a lot of skill passing in the low post. On the whole this Dwight Howard signing thing is looking like a pretty good move. As far as criticisms go the Rockets are struggling to get Dwight his looks in transition. I think eventually Chandler Parsons and Jeremy Lin are going to stop worry about turning the ball over on an alley-oop attempt and trust Dwight to grab it and throw it down. So far in the preseason there has been is a clear disconnect in that regard.

Two weeks ago I thought Omri Casspi was one bad performance away from being cut from the training camp roster. In his first two games, Omri has a total of 37 points and is averaging 78% shooting from the field. Again, small sample size, but Casspi looks great. I'm starting to get the impression that Casspi is being groomed for a Carlos Delfino type scoring role on the second unit. If he keeps up this kind of play, Casspi could theoretically weasel his way into the starting line up as a power forward (Casspi is 6'9).

Luis Scola had 10 points, six rebounds, and is still devilishly handsome. I couldn't be happier to see Luis playing for a contender while he's still got enough gas in the tank to be an offensive force. Best of luck to you Luis; you've made a Pacers fan out of me.

Danny Granger (2-10 shooting) looked pretty awful. He's had a year off so I'll give him some time before I make any assumptions about his game. Regardless of how he rebounds this season, the Pacers belong to Paul George now.

Aaron Brooks has been getting regular rotation minutes during preseason in a dual point line up, usually playing beside Jeremy Lin. The Rockets went small a ton last season and I'll be interested to see if that changes with Dwight on the roster.

Hey, it's Hilton "The Neck" Armstrong in for the Pacers! 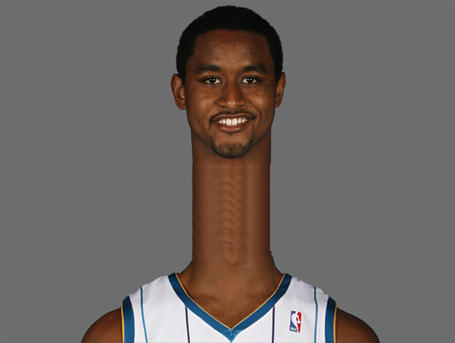 What do you think of Jeremy Lin coming off the bench?

Who should start at power forward? Do the Rockets need to make a trade to bring somebody new in? How important is it to have a shooter at the four?

Are the Rockets meeting your expectations so far in the preseason?

Get more coverage of this game over at Indy Cornrows.