The Rockets have put together a deep and talented roster. What will the 2013-14 season bring?

SB Nation's preview train makes its stop in Houston, and we're going to talk about the exciting season facing the Rockets after adding Dwight Howard to an already impressive core of James Harden, Jeremy Lin, Chandler Parsons, and Omer Asik. What will 2013-14 bring? 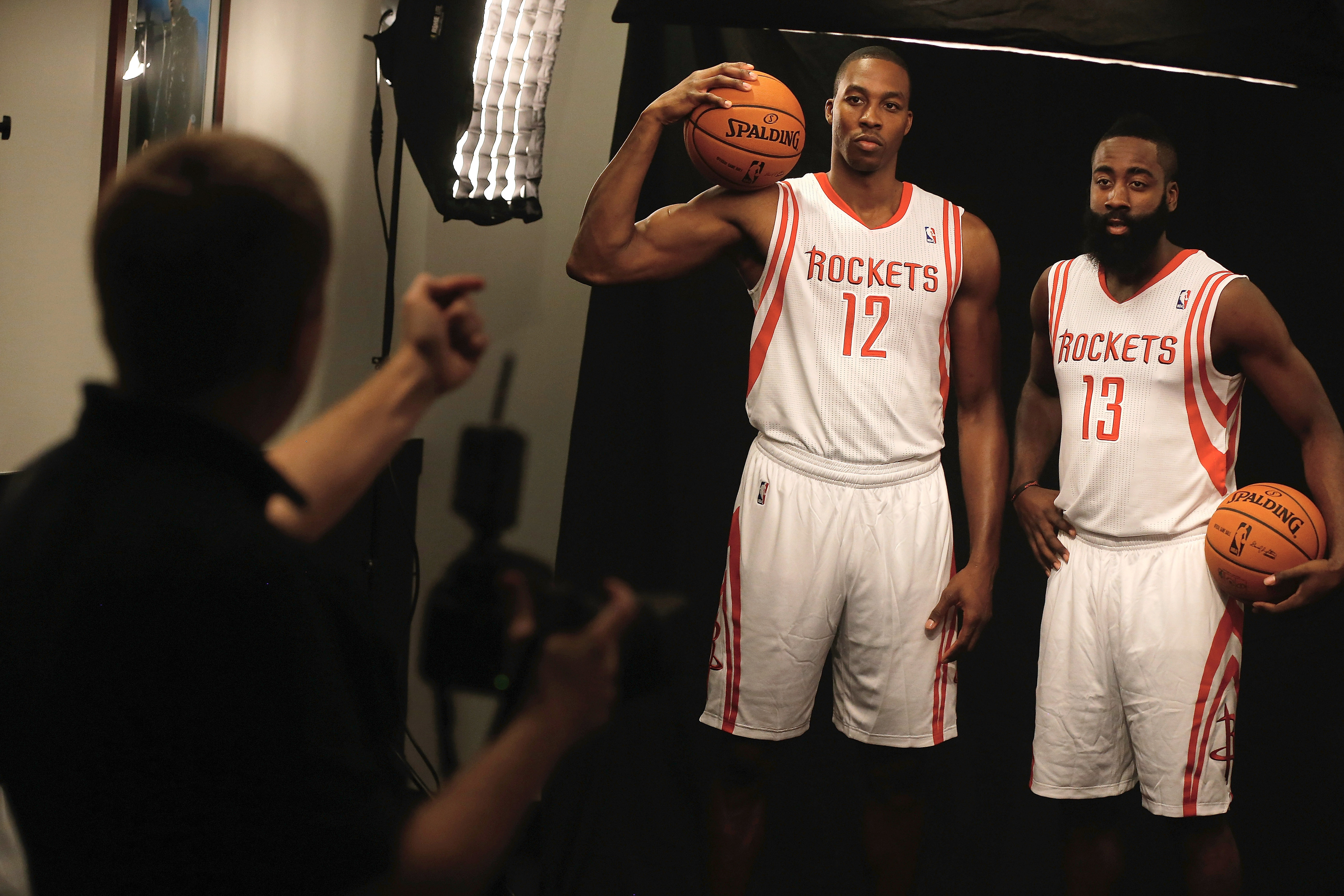 1. What significant moves were made in the off-season?

You probably have heard about the big move the Rockets made this off-season. Yes, that's right, they signed Omri Casspi to a two year, partially guaranteed deal to compete in training camp for a backup spot at the three and four.

Other than that, they made a couple of other moves, signing Dwight Howard to a four year, $88 million contract after he spurned the Lakers, Warriors, and Mavericks. Yes, that's right, Daryl Morey finally got his man.

The signing was the culmination of years and years of work to build flexibility and increase the young talent on the roster. A year ago today, there was not a single player on the roster with future or present All-Star potential, and now the Rockets have a pair of All-Stars in their prime locked up for at the very least three years together. In short, Daryl Morey completely changed the path of the franchise.

It's not possible to overestimate the difficulty of completely rebuilding without tanking for a top pick, but it was a strategy that Daryl Morey pulled off masterfully. After jettisoning the contracts of underperforming lottery power forwards Thomas Robinson and Royce White, the Rockets had enough cap space to sign Dwight Howard and place the fate of the franchise upon his Herculean shoulders. Now, it gets fun.

The Rockets made some other minor moves to fill out the roster, bringing back veterans Aaron Brooks and Francisco Garcia, and adding Reggie Williams, Ronnie Brewer, and Marcus Camby, but they for the most part seemed focused on retaining a core that surprisingly found themselves in the playoffs last year. With more guaranteed contracts than roster spots, the math gets tricky and the competition gets fierce.

2. What are the Rockets' biggest strengths?

When looking up and down this roster, there are two positions that are clearly the deepest, the center and the point guard spots. At center, the Rockets obviously added Dwight Howard, and they bring back Omer Asik who carried an otherwise weak defense last year to back him up. The two may play together for stretches, but the fact that the Rockets will have a center of Howard or Asik's caliber on the floor at all times is a luxury no other team can boast.

The ridiculous thing is that behind Howard and Asik, there remain two more competent backup centers, Greg Smith and Marcus Camby. Camby may be forced into a cheerleader role for the early part of the season, but he remains a solid rebounding big, and Smith was an uber-efficient forward/center hybrid last year when he got minutes later in the season. Should an injury to Howard or Asik knock either out for any significant time (or a trade in Asik's case), the Rockets would still not be in dire straits.

The point guard spot is almost as deep, with four point guards that appear competent enough for floor time if needed. Jeremy Lin and Patrick Beverley appear to be a tough duo for any opposing guards to chase around for 48 minutes, but Aaron Brooks showed in the playoffs that he can score off the bench if called upon, and Isaiah Canaan has an intriguing profile as an early second round pick this year.

Though there are question marks at other positions, going four-deep at two positions is a tremendous asset that will surely incite jealousy across the league.

3. What are the Rockets' biggest weaknesses?

The Rockets brought in former Defensive Player of the Year, Dwight Howard, to shore up a leaky defense, but he is not going to solve all of their defensive woes. Jeremy Lin remains merely average on that side of the ball, and James Harden is one of the more porous defenders in the league. One can hope that Howard's offensive ability will diminish the Rockets' dependence on Harden offensively and thus allow him to devote more effort to the defensive side of the ball, but that may be wishful thinking.

If the Rockets are unable to keep opposing offenses out of the paint, Dwight Howard will fall into foul trouble all too often and that could put a big damper on his impact. For that reason, the Rockets have to work to shore up their defense, but it's not clear whether new schemes will be enough.

The other major weakness the Rockets face is a complete lack of experience at the power forward spot. We've detailed why a Howard-Asik pairing at the power forward and center positions will likely be unsuccessful, and thus the Rockets will almost certainly be forced into starting Donatas Motiejunas or Terrence Jones. Both showed flashes in their rookie years, but neither got significant enough experience down the stretch to be counted on to be a featured player in this Rockets team.

There may be some mixing and matching in the early going for the Rockets, and it might cause a somewhat slow start for a much-anticipated team.

4. What are the goals for the Rockets?

The goals for this Rockets team do not simply exist for this year. Daryl Morey has said that he hopes that the Rockets can secure home court advantage in the Western Conference (ranking in the top four seeds), but it's clear that this team was built to compete both now and in the future.

James Harden turned 24 a month and a half ago and is under contract for the next five years. Dwight Howard is still just 27 and will be with the team for at least three more years. With a young roster around them, there is no reason why this team cannot grow into a contender over the next season or two and win a championship. Dwight Howard didn't join the Rockets to get to the second round of the playoffs. He has a title on his mind and so do the rest of the Rockets. Perhaps it won't be this year, but they expect to get there in the next two or three.

More: All of SB Nation's NBA previews to date

5. The X-Factor: What is going to happen with Omer Asik?

Perhaps the second biggest story surrounding the Rockets this summer has to do with their incumbent starter, Omer Asik. Just minutes after Dwight Howard announced he would be joining the Rockets, ESPN had already posted an article detailing his unhappiness in Houston and his desire to be traded. With all the ensuing reports in that vein, I'm inclined to assume that where there is smoke, there is fire.

The Rockets have however pledged loyalty to Asik and detailed the number of ways that they plan to use him this year. McHale has discussed playing the two together for stretches, reiterating over and over that they won't trade him, but it all seems to be more posturing than anything. Maintaining spacing with both Howard and Asik on the floor is going to be nearly impossible, and on a team that relies heavily on penetration from guards, having at least one big that can stretch the floor is nearly essential. Neither Howard nor Asik can do that.

Instead, it seems like Asik will be used mostly as a luxury this year, and potentially trade bait if the right deal comes along. I'm still inclined to believe that Morey will make the move for a stretch-four if such a deal presents itself, but the Rockets are obviously in no hurry to change a thing right now.

52-30, third in the Western Conference

Where do you see the Rockets finishing in 2013-14? Let us know in the comments!

More from The Dream Shake: