The Rockets haven't played Omer Asik much since dismantling the Twin Towers matchup. No, this does not mean they have traded him.

Share All sharing options for: Less minutes for Omer Asik does not mean the Rockets have traded him

On Wednesday night, Kevin McHale finally shut down the Twin Towers experiment, replacing Omer Asik with Dwight Howard in the starting lineup. Asik, after seeing significant minutes all season, didn't see the floor much, and the Rockets even played minutes with no true center on the floor. This revelation caused many to suspect a trade is in the offing. That is silliness.

Just for reference, here were our mentions on the TDS twitter account after pointing out Asik's long stay on the bench tonight: 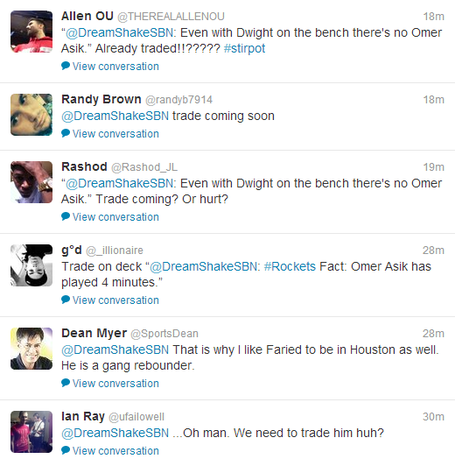 With this change in the lineup, the Rockets are essentially saying that they are going to try to matchup as best as possible with other teams and not factor in a player's emotions in their decisions. Omer Asik may not be happy, but it does not mean that he is not important. The Philadelphia 76ers start Thaddeus Young and Spencer Hawes. Their primary bench big men are Lavoy Allen and Brandon Davis Davies. Against a lineup like that that lacks any dominant big men, centers are at less of a premium.

With that in mind, the Rockets better match up with the 76ers with a smaller lineup. When Howard went out in the third quarter, the Rockets went with no centers on the floor. That does not signal that Omer Asik has been traded. It simply signals that in this one moment, the Rockets are better with a more mobile and perimeter oriented bench lineup.

At the beginning of the season, Kevin McHale wanted to get Asik and Howard working together on the floor for games just like tonight, times where the Rockets didn't need a center off the bench. In these games, Asik is going to struggle to get serious minutes.

As the Grizzlies, the Spurs, or the Pacers come to town, Asik's role will take on greater importance. But right now, the Rockets are simply using him situationally. Taking one game's limited minutes as a referendum on his future with the team is a leap I'm not willing to make.

Omer Asik is on the trading block and has been for a long time. But until the Rockets get full value for him, they aren't going to move him. A Thursday night game against the 76ers doesn't change anything.