Changes to the Rockets starting lineup show promise, but Rockets give up 4th quarter lead and fall in overtime to 76ers 117 - 123.

Share All sharing options for: Lin's Offensive Explosion Not Enough In Overtime Loss

Analysts, naysayers and TDS comment boards will have plenty to say after the Harden-less Houston Rockets brought on a confidence shaking loss to the Philadelphia 76ers.

The Rockets failed to hold a 10 point 4th quarter lead despite posting team highs for the season with 15 three pointers and 34 assists.
The difficult loss is the second straight overtime game for a Rockets team leading the league in turnovers and suffering from a lack of any defensive identity.

The 76ers received career games from James Anderson, who dropped 36 points, and a triple double from Tony Wroten (18p, 10r, 11a).

The first half saw a Rockets chemistry experiment: One part hot shooting and quality ball movement - One part terrible defense.

The mixture left the Rockets down 60 - 57 at the end of the first half.

Lin and Howard each poured in 16 first half points and Terrence Jones contributed a few threes during his first start. Patrick Beverley, Francisco Garcia and Chandler Parsons went 1 of 7 from the three point line in the first half. The good news is most of these attempts were open looks and should be taken a second time.

In the first half the 76ers surprised Kevin McHale by resorted to the season's first instance of a first half Hack-A-Dwight. It didn't work. Howard went 3 of 4 from the free throw line and forced the 76ers to abandon the strategy.

In the second half the game slowed down substantially. The Rockets continued to run a half-court offense that saw lots of post ups and open threes. They didn't score their first fast break basket of the game until there were 2:30 remaining in the third quarter.

Both teams went small for much of the second half. Terrence Jones came in at center for Dwight Howard for two stretches as McHale left Asik on the bench. The small lineup failed to generate offense as Parsons and Casspi tried to beat their man only to find several 76ers waiting for them in the lane.

In the fourth quarter Patrick Beverley began to show defensive signs of life in the while Jones, Parsons and Casspi began collapsing in the lane to help out Howard.

The new defensive life propelled the offense and helped the Rockets establish a 10 point fourth quarter lead which was subsequently disassembled by quality play from the 76ers and a Rockets offense that missed ten straight shots.

It all came down to the final minute of the game. With a one point lead and 48 seconds on the clock Chandler Parsons came up with a huge block on a James Anderson drive. Ignoring any desire to conserve his greatness, Parsons then got mobbed during an ill advised drive giving the ball back to a surging 76ers team.

While pushing up court for a lead changing bucket Evan Turner failed to notice a trailing Patrick Beverley and left the ball exposed. Pat Bev got a steal and went to the line after a quick foul where he made both free throws.

With a three point lead and eighteen seconds on the clock the Rockets did not foul, upsetting much of Twitter, and the 76ers found a miracle. A broken play caused Tony Wroten to hurl the ball from the baseline back to the top of the three point line where James Anderson rose over Lin to collect the ball. He then calmly drilled a game tying three pointer over a quality defensive effort from Lin.

In overtime, the Rockets rolled over. They lost their offensive touch, ricked some threes and ceded a 123 - 117 loss.

Offense: The Rockets offense looked solid in the first half and it's more than Lin drilling an industrial-size load of threes. With only Dwight Howard in the low post the Rockets were able to secure quality post possessions for Howard and find lots of open shooters.

Many of Lin's threes were uncontested shots because of the Rockets spacing and passing.

The passing looked better than it has all year and the team came close to setting a new season record for team assists before the first half ended: 17 first half assists.

Space: With Asik on the bench Howard was able to produce the space most half-court offenses are accustomed to.

Here's an example of a possession where the 76ers did not double team Howard in the post: 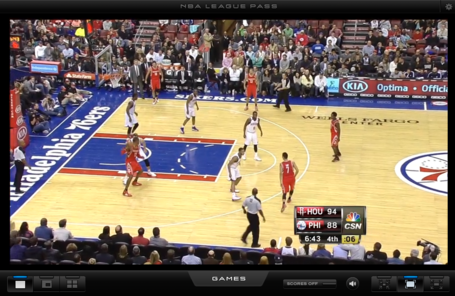 Howard has the entire low post to operate in. He was able to get an open look after a post move. He missed, but it's a shot he should take every time.

Here's an example of the defense collapsing on Howard in the post: 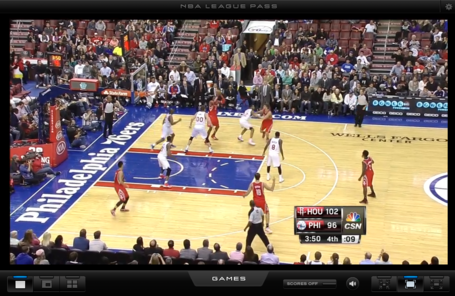 Here Howard made a cross-court pass to Casspi who put up a wide open three. He missed, but it's a shot he should take every time.

Defense: Remember last week when the internet was losing its collective mind over James Harden's abysmal defensive lapses? Tonight's first half was like that for the entire team.

Harden may be mailing it in on defense, but it's clear the entire team suffers from a systemic problem begging for solutions.

We gave up 60 first half points to a 76ers team missing its second leading scorer and placing James Anderson in a man-on-the-spot situation. He succeeded. In fact he didn't miss a shot in the first half.

The only part of the Rockets defense showing life is Dwight Howard's lane protection. He intimidated 76ers players and forced them to bail on a drive or change their shot.

The Rockets elected to end the Howard-Asik starting combo. They placed Terrence Jones and Chandler Parsons at forward while sticking with Patrick Beverley at point guard and plugging Jeremy Lin in for an ailing James Harden.

Terrence Jones looked like an NBA player. Gone was the point-forward Jones from Summer League. Left in its place was a PF who took open three pointers and exploded off the floor under the rim, creating second chances, tipping balls and overall being a pain in everybody's ass when they already have to deal with Dwight Howard.

Lin won't continue to start once Harden returns, but his success tonight had McHale place Lin, not Beverley, on the court for the final possession of regular time. At the start of the season the opposite was true.