This should have been a more difficult game. The Rockets were outgunned in LA last night and dealt with a late night arrival in Portland and minimal practice/warm up time before playing a playoff contender.

Yes. I believe Portland will make the playoffs. 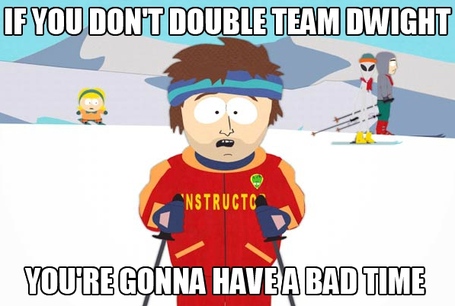 Anytime the home broadcast crew makes reference to Sunday night football game that took place 170 miles away (Seattle comeback) during a Tuesday night NBA broadcast you know things didn't go well for the home team. The Rockets had an 18 point lead in the third quarter when the Blazers broadcast team unleashed this reference.

With no collapsing pressure Dwight made moves to the hole unimpeded. This never required the Rockets shooters to get involved and certainly covered tonight's lackluster three point shooting.

Tonight's result should keep the faith alive after a difficult loss to the Clippers.

Last night's game raised a lot of doubts about the Rockets ability to overcome foul trouble and sluggish play.

Tonight the Rockets proved they are not on the same game plan as last year. We bricked three's tonight, Harden had a love affair with the mid-range jumper and Dwight dominated on the inside.

The Houston Rockets now have a down low presence that opponents must respect.

The Blazers didn't seem to give much thought or respect to Dwight's offensive game. They lost tonight: 116 - 101.

The game was extremely close in the first quarter. The Rockets were plagued by offensive foul calls and got the majority of their work done at the free throw line. The Blazers did their work at the three point line. Once they went cold from deep the Rockets were able to match their offensive output by using the paint.

Patrick Beverley returned to action tonight and provided a perimeter defensive presence missing in his absence.

James Harden was not the sluggish cement-footed creature we saw against the Clippers. His defense still leaves much to be desired, but he registered a defensive performance on par with last year.

The Rockets took the lead in the first half with cold methodical Harden-Howard offensive combinations and a few contributions from the supporting cast. Nicolas Batum went from being a first half game changer to a second half footnote.

The Houston Rockets never let go of this game from the second quarter on.