Announcing the winners of our Rockets t-shirt giveaway!

The results are in for the giveaway. See who won the contest!

Share All sharing options for: Announcing the winners of our Rockets t-shirt giveaway!

Last week, we announced a contest with Million Dollar Ballers, a t-shirt company to bring you guys a free t-shirt. We had an overwhelming response, with over 150 entries, and today, we announce the winners. The winners are Jessica and Matt with their funny stories of Rockets fandom. Here are their two stories:

The year was 1994, during the Rockets playoff run in a championship season. I was four, my brother, Daniel, was six. We were playing t-ball on our driveway when I was tragically struck right above my left eye with a bat. There is great debate among Daniel and myself on who is at fault: I may have been standing a bit close to the T, yes, but Daniel was using his dad-pitch bat, not the official T-ball one.

Regardless, my face was split open. I remember looking down and seeing spots of blood drip onto my bright white, new sneakers. I cried: Daniel ran for my dad (a nurse anesthetist and resident medical expert). He instructed Daniel to hold his own shirt on my face to keep pressure on the wound while my dad got a new shirt and his keys. We drove downtown to Texas Children's Hospital from Sugarland to get my face all stitched up.

That night we were champions. I had survived a bloody wound. Daniel had bravely kept the blood at bay. We were rewarded for our valiance with Pappasito's (which you know is spectacular if you are in Houston) at the coffee table, in front of the TV (which was a very special thing indeed) and watching the Rockets, our favorite team playing our favorite sport, emerge victorious too.

It was a good day.

I don't remember exactly which year but I'm pretty sure it was against the Magic, but my Dad had accidentally won 2 floor seats to a Rockets game at a silent auction for my sister's v-ball team. We had awesome seats, right next (and really right behind) the Rockets bench. The whole experience was insane for someone who had only seen professional sports from nosebleed sections his entire life. Everything from the communication on the bench, sitting 2 feet away from Yao, listening to Adelman yell at the refs, all of it was fun. And while I don't remember many details of the game itself, I remember pregame vividly.

The Rockets are doing their shootaround, and Bonzi Wells shoots a 3 that's well short that flies off the rim and happens to bounce right into my hands. He starts walking towards me with his hands up to catch the pass I'm about to attempt, when someone calls for him on the court and he turns his head. I'm already in the throwing motion and trying to make sure I don't look like an uncoordinated moron so I'm not focusing on his face, so I pass the ball while he's not looking. The ball hits him in the chest and he turns his head and just stares at me for a few seconds before saying "come on, man". My Dad will never let me forget the day I pegged Bonzi Wells in the chest with a basketball.

I wish I had a claim to fame like being able to say I nailed Bonzi Wells with a basketball, but I'll have to stick with "resident basketblogger" for now.

If you didn't win the contest, you can still get the shirts in time for the holidays. Check out Million Dollar Ballers' website here, their Facebook page, or their twitter page. 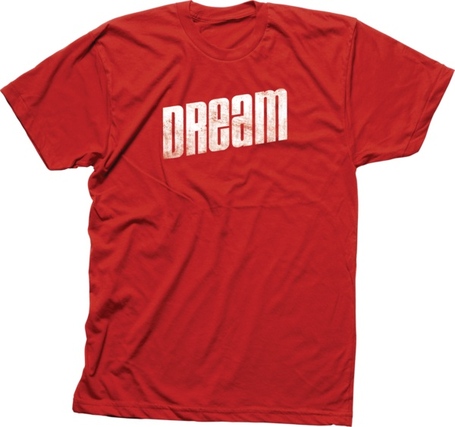